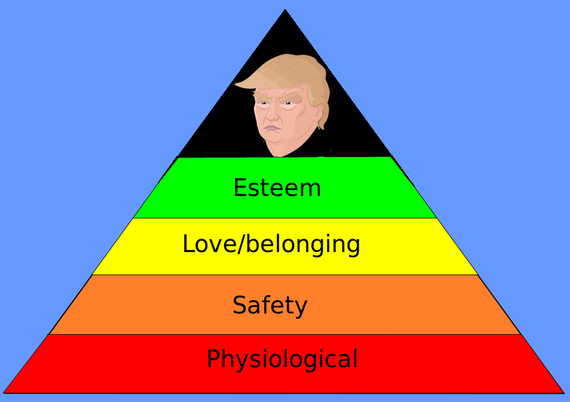 In 1943, Abraham Maslow introduced the psychology of human potential to a broad audience via his "hierarchy of needs" pyramid. Seventy years later it is still taught in high schools and colleges despite widespread criticism of Maslow's data-collection processes, suspect assumptions, and highly subjective interpretations.

I've never been a fan of Maslow's hierarchy of needs. I don't like its sequential, step-by-step approach to personal motivation, growth, and achievement. Life is anything but linear, and humans are faced with a multitude of "necessities," motivations, and goals that go far beyond what Maslow outlined.

Nonetheless, Maslow's work can help illuminate why Donald Trump became the Republican nominee and why he still garners considerable support despite one "this is a new low" gaffe after another. At its most basic level, Trump's harsh rhetoric appeals to the bottommost layers of Maslow's hierarchy - physiological and safety needs. He's going to deliver more jobs at higher pay, make "winning" so common it becomes boring, and ensure that Americans are protected against terrorists domestic and foreign, can shout "Merry Christmas" from the highest rooftops, and stop Mexicans from taking the jobs that Americans don't want.

But it's the next two levels on Maslow's hierarchy of needs that best explain Trump's core character and his continuing support: esteem and love/belonging. As the exemplar of unabashed narcissism, The Donald is all about ego-stroking. If you love him, he loves you back. If you make the slightest of slights, the Trump venom will flow fast and furious. He has a deep insecurity that requires near constant affirmation of his greatness - and he manifests his "greatness" by a bullying demeanor. Maslow said, "If you only have a hammer, you tend to see every problem as a nail." The Trump corollary is, "If you're a bully, you tend to see every encounter as an opportunity to bully."

Most tellingly, Trump provided his loyal supporters with something they rarely experience: the very same esteem and love/belonging. Trump voters tend to reside on the fringes where they are often afraid to voice their politically incorrect (and often abhorrently) beliefs and opinions. Trump has used the love/belonging need to create a community of the racist, homophobic, nationalistic, and AK-47-toting, ill-informed masses. The kind of vile individuals Maslow summarized as such:
"Rioting is a childish way of trying to be a man, but it takes time to rise out of the hell of hatred and frustration and accept that to be a man you don't have to riot." Unfortunately, rioting is all Trump and his followers know. These are the folks who are widely demeaned in movies, on television, and in print as redneck inbreds. It's rare that they get love from New Yorkers - let along a billionaire whose face is recognized far and wide. So the more Trump strokes them, the more they stroke him, and the more he strokes back. Some have characterized Trump's campaign as a cluster you-know-what, but it's really more of a circle jerk. Everyone gets what they want with no qualms or basic understanding of what they're doing and what damage might be wrought by their masturbatory fantasies. They imagine a Trump presidency that will deliver a new world order where white people take over their rightful spot at the top of the hill and where anyone "not like us" is sent back to wherever they came from.

Neither Trump nor his voters approach the self-actualization level that Maslow describes. There is no self-awareness. They see neither the forest nor the trees. They live in a world that no one else sees. They live in the past and in some idealized, past-inspired future. They ignore the present. And to quote Maslow, "The ability to be in the present moment is a major component of mental wellness."