On Tuesday night, the Tea Party lost its last, best chance to knock off an incumbent Republican U.S. Senator this year. By a margin of 48-41 percent, Kansas Senator Pat Roberts prevailed over Milton Wolf, a radiologist and first-time candidate who was mostly known for being Barack Obama's conservative second cousin. 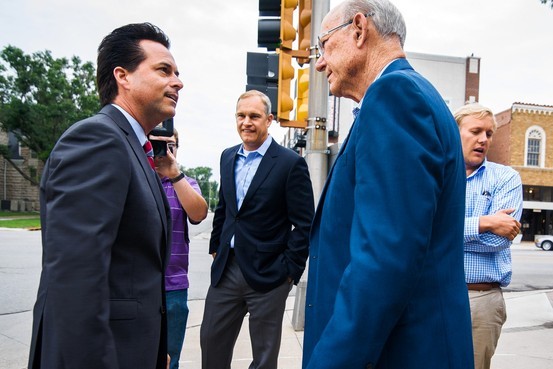 Roberts appeared vulnerable earlier this year after questions were raised about his residency in Kansas, similar to what helped defeat veteran Sen. Richard Lugar (R-IN) two years ago. The New York Times reported in February that Roberts was renting space from a supporter in order to maintain his voter registration in Kansas, an address where neighbors hadn't seen him in years. He compounded his problems with a verbal slip last month, when he admitted in a radio interview that he returns to Kansas "every time I have an opponent."

And Wolf was extreme enough to be a credible Tea Party standard bearer. While parlaying his family ties and far right wing views into frequent guest spots on Fox News and a column for the Washington Times, over the past few years Wolf repeatedly compared Obama and liberal Democrats to Hitler and the Nazis. He insisted "(Sarah) Palin indeed was right...death panels are all too real," about supposed secret provisions in the Affordable Care Act.

According to Wolf, the Act's requirement that people who choose not to buy health insurance be modestly fined (since by doing so, they risk burdening society with future emergency health care costs) was reminiscent of "Stalin's iron-fisted gulags." And he pledged to replace the ACA with his own "PatientCare" initiative, which would effectively destroy Medicaid by block-granting it to the states and changing it to a "premium-support plan" that would generously "afford the needy the ability to purchase their own private insurance."

But Roberts hit back hard and early, helped by his far superior campaign war chest. He refused to debate Wolf, which a week before the primary led to a memorable confrontation between the two when Wolf ambushed the Senator on the street prior to a campaign event.

Roberts' ads attacked Wolf over revelations that he had posted gunshot victims' X-rays to Facebook in 2010, accompanied by snarky, joking comments that Wolf was eventually forced to admit were "insensitive." And highlighted other missteps like Wolf's failure to vote regularly in local or state elections.

Except for an ad questioning Wolf's conservative credentials with an out-of-context clip of him saying he wanted to see Barack Obama succeed, Roberts refused to argue over policies, instead making the primary a referendum on Wolf's personal character. It was the same playbook that worked for other incumbent Senators who successfully fended off Tea Party challengers this cycle, like Senate Minority Leader Mitch McConnell (R-KY), who beat back a well-funded campaign by businessman Matt Bevin. And Sen. Thad Cochran (R-MS), whose defeated opponent is still challenging Cochran's 7,667-vote runoff win on June 24 in their ugly primary fight.

Wolf was a flawed candidate, but he held Roberts to under 50% of the vote. His failed primary challenge effectively made the case to many Kansas voters that Roberts has been in Washington for too long. Roberts first went to D.C. in the 1960's as a congressional aide, was elected to the House in 1980, and moved up to the Senate in 1996.

Recent polls have shown a closer-than-expected race between Roberts and his Democratic opponent in the fall, Chad Taylor, the sitting District Attorney of Shawnee County, the county that includes Topeka, the capitol of Kansas. The telegenic, 40-year old Taylor was first elected in 2008, and re-elected in 2012 after facing no opposition. He won his own primary Tuesday night by a margin of 53-47%, beating a former U.S. Senate candidate with statewide name recognition. Taylor was endorsed by the Kansas City Star, who called his candidacy "impressive," listed his priorities as "growing jobs and the economy," and said he "promises pragmatic, bipartisan work."

Taylor has won accolades for eliminating his office's backlog of over 4,000 cases that he inherited from his predecessor. He made national headlines in 2011, when to draw attention to budget cuts, his office stopped prosecuting domestic violence cases, calling on the city of Topeka to provide funding. In a surprise response that was widely criticized, Topeka actually repealed its ordinance outlawing domestic abuse, which led Taylor to announce that his office would resume prosecuting such cases.

Last month, one SurveyUSA poll showed Taylor within five points of Roberts. This led Steve Kraske, political correspondent for the Kansas City Star, to declare that "something...dramatic is going on in Kansas politics," and said it "may be the closest a Democrat has been to a sitting Republican senator since Herbert Hoover bade farewell to the White House."

Roberts is facing other headwinds, too. Kansas is experiencing a Brownback backlash, after current Republican Governor Sam Brownback swung the state hard to the right once being elected in 2010. Brownback, a staunch religious conservative and longtime Koch brothers ally, formerly served beside Roberts in the U.S. Senate, and ran for President in 2008, dropping out before the primaries began. While in the Senate, Brownback co-sponsored the Constitution Restoration Act of 2005, which would have forbidden courts from ruling on matters involving church/state issues, and stated that judges who did hear such cases would be subject to impeachment and prosecution.

As Governor, Brownback has pushed through drastic cuts to state education spending. He declared that life begins "at fertizilation," and signed five anti-abortion bills, including a May, 2011 law that forbids insurance companies to offer health care coverage for abortions except to save a woman's life, with no exceptions for rape or incest.

He also blew a hole in the state's budget by slashing the top income tax rates in Kansas. In response, last April the state's debt rating was downgraded by Moody's Investor Service.

In his classic 2004 book What's The Matter With Kansas?, Thomas Frank explored the rise of anti-elitist conservatism, and how the radical right had managed to hijack populism in our country's heartland. It detailed how long before the Tea Party came to national prominence, the state's far-right conservatives were waging war with moderates for control of the Republican Party. Ten years later, extreme right-wing craziness and heartless social policies may have finally gone too far even for a bastion of red state America like Kansas.