Conservative Republicans in Tennessee just passed a bill in the Senate mandating teaching sexual abstinence. The bill makes it "a cause of action" for any teacher or organization to "promote gateway sexual activity or demonstrate sexual activity" to students. Only one Democrat was willing to vote against the measure.

The bill says that government schools "must emphasize abstinence from sexual relations outside of marriage," which basically requires teaching gay students that they may never have sex, since Tennessee doesn't recognize same-sex marriages. The bill also bans the distribution of materials "that condone, encourage or promote student sexual activity among unmarried students."

The law is meant to stop the flow of information on the use of birth control or condoms -- which conservative Christians say encourages sexual activity. A widespread view on the Religious Right is that venereal disease and pregnancy are natural obstacles from God, which discourage immoral behavior. Reducing sexual risks lowers the cost of sexual activity, and thus increases demand, thereby encouraging immorality. This bill also criminalizes any "demonstration with devices manufactured for sexual stimulation." Demonstrating condom use, with a simulated penis, would be a crime as would be condom distribution.

The bill does say one may present "medically-accurate information" but only when "presented in a manner consistent with the provisions described above," and if students are told "only abstinence removes all risk." Given that the "provisions described above" are very vague -- for instance, "gateway sexual activity" is never defined, though its advocacy is a crime -- this exposes all teachers in sex education to legal threats. Is "hand-holding" a "gateway sexual activity?" The fundamentalist high school I attended very explicitly said that dancing was a gateway to sex.

The law stipulates that any parent may file a complaint against any teacher and that the school "must investigate" it. Parents may also sue the teacher "for actual damages plus reasonable attorney's fees and court costs." Parents can drag a teacher into court based entirely on their own subjective religious opinion. This constant legal threat is meant to stifle anything but those opinions consistent with the most extreme religious conservatives in the district.

While conservatives are obsessing about abstinence, the National Center for Health Statistic is reporting, "Fewer babies were born to teenagers in 2010 than in any year since 1946," though teen birth rates remain highest in the conservative states, where abstinence programs are popular. (See below) Today's teens are having fewer babies that than their parents or grandparents -- making me wonder whether older generations aren't projecting their own less-responsible pasts upon the young. 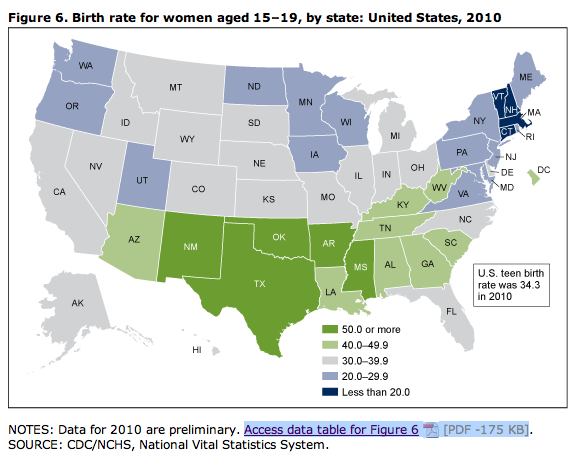 The legislation claims, "Only abstinence removes all risk." The reality is that a very large percentage of teens are not going to be abstinent, no matter what laws are passed. Denying them information, which reduces their risks, is absurd. It is not a policy we generally follow.

The number one cause of death among teens is accidents. Between 1999 and 2006 an average of 16,375 teens died per year. Based on CDC estimates, approximately 7,860 teens are killed in motor vehicle accidents yearly. Another 818 accidentally drown and 328 are victims of accidental shootings.

What would a "zero risk" policy mean in these areas? No conservative argues for total abstinence from driving or swimming -- to remove "all risks." When measures to restrict gun ownership are suggested, they become apoplectic. But, gun bans are based on the same logic as abstinence programs -- they seek to remove "all risk."

How do we deal with other risks? We teach teens about the use of seat belts, the dangers of drunk driving and the risks of texting while driving. Parents don't lobby for anti-driving laws; instead, they literally hand the car keys to their children and take them driving, or send them to a driver's education program. We give swimming lessons and warn kids about not swimming alone, or going "out too far." Responsible firearm owners recommend courses to teach the young about the proper handling of firearms, and the risks and dangers involved. They try to educate children what to do if they encounter a firearm accidentally.

Forty percent of teens, 17-years-of-age or younger, are already sexually active. When it comes to driving, only about 31% of 16-year-olds have licenses. A greater percentage of 16-year-olds are sexually active than drive. This is obviously truer for teens under 16, though 27% of them are sexually active. While the schools teach these teens about wearing seat belts, conservatives want to ban the demonstration of condoms. In the case of Tennessee a 15-year-old can get a learner's license but it would be illegal for a sex education program to hand him a condom.

The conservative impulse, in other areas, is one of harm reduction. With driving, swimming and firearms they claim logic and common sense. These virtues go out the window when sex is mentioned. Conservatives may speak about risk, but they really mean religion. They are always tempted to use law to impose their religious values. Abstinence-only programs don't exist "for the kids," or because of risks. They exist almost wholly because Republicans -- and Democrats in Tennessee -- are trying to placate a religious minority, even if it means exposing teens to greater harms.