Rudy the dog isn't lounging around a nice warm lavender-infused tub, being fed one biscuit after another, just for the fun of it.

The baths, which heal and soothe his skin, are "a medical necessity," says Courtney Bellew, director of the Northeast chapter of Special Needs Animal Rescue Rehabilitation (SNARR), a group that cares for animals who are in really tough shape.

Not that this aspect of Rudy's new life is all work.

"Rudy absolutely loves his tubby time and clearly the attention that comes along with it. He loves getting spoiled and pampered," Bellew says.

Rudy deserves all the spoiling he can get.

Even for folks at SNARR, who are used to seeing badly injured animals -- the group's motto is "giving hope to the hopeless" -- Rudy is an especially hard case.

Last November, he was brought to a New York City shelter, emaciated and nearly hairless. He was covered in feces and dirt. He had gaping wounds all over his body that Bellew surmises might have been the result of battery acid, and a broken front leg.

"His front leg was so horrible that I didn't photograph it," says Bellew. The shelter called her soon after Rudy came in, saying the dog had to be taken to the vet by a rescue group right away or he wouldn't survive.

"He ducked his head in fear whenever I would go to touch him, but was so grateful I was there and showing him a kind hand," says Bellew. "I was truly shocked and heartbroken." 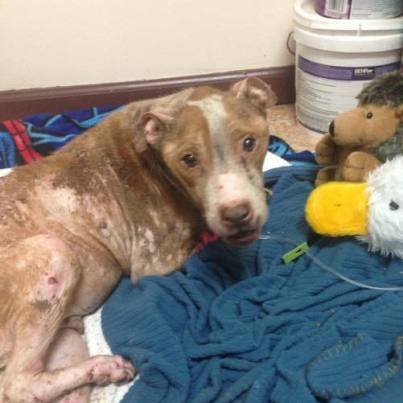 Bellew wasn't sure Rudy would live through those first days. But after nearly a week at the veterinary clinic, he was ready to go to his new temporary home with an experienced foster family, who wish to remain anonymous.

"They also happen to be a husband and wife team who are both incredible veterinarians," says Bellew. "Rudy spends his day in a loving, warm and beautiful New England farm home. He is surrounded by tons of love, two children, two amazing foster parents, several other dogs, cats and even an array of barn animals."

Rudy now has a russet-colored coat that's growing in, and a new friend in the foster family's lamb, Harold.

Eventually, Rudy will be available for adoption. He'll need surgery on his front leg first. Depending on how strong he gets, Rudy might then need a wheelchair. And he will certainly need lifelong treatment for some chronic conditions.

If no one can say for sure how Rudy would up so sick and hurt last fall, he's now on his way to a happy future. And those glorious baths -- full of herbs and salts and other soothing agents -- are helping get him there.

"Rudy's eyes are filled with love and hope and he has a way of grabbing your heart instantly when he looks at you. He has always appreciated being doted on and still does today, as you saw with his spa treatments," says Bellew. "I'm just so glad we are able to show him a good life."

Keep tabs on Rudy -- and the many other animals for which SNARR Northeast cares -- on the group's Facebook page.

Animals who are up for adoption, can be found on SNARR Northeast's website, where you'll also find information about becoming a foster parent. Donations can be made at Snarrnortheast.org.