Emojis -- those smiling yellow blobs and adorably rendered foodstuffs -- are meant to convey feelings that are difficult to put into words. But they're usually pretty silly, even the "anguished" face:

What if emojis could relay serious, even scary situations and allow someone to get the help they need? The answer to that question may lie in Abused Emojis, a new app for iOS that allows users to send graphic representations of situations that fall well beyond the purview of Unicode's standard emoji sets.

According to BRIS, the Swedish nonprofit that created the app, the Abused Emojis are meant to help young people seek out support by giving them the tools to communicate difficult, painful or dangerous situations. The app includes images of people with black eyes, a hand striking a small child in the face, slashed wrists and intense portrayals of subjects like alcoholism and suicidal ideation.

"This campaign is [meant] to encourage kids not to sit quiet with their troubles, but to reach out to others," Silvia Ernhagen, communications director at BRIS, told The Huffington Post.

"We think that there’s no wrong way to communicate, and we want children to communicate more. Through the Abused Emojis, we want to give them a wider range of emotions and feeling to choose from," she added.

The app installs a new set of emojis onto your iPhone or iPad. You can insert them into any text message, and the recipient will be able to see them whether they have the app or not -- even if they're not using an iOS device. 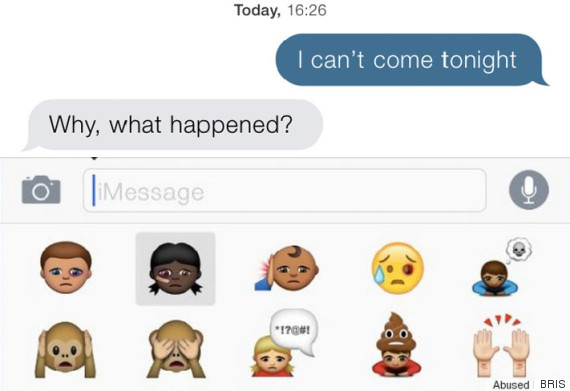 Admittedly, the images are jarring at first. You may not know what to do if you receive a text message containing an emoji of a bruised child, and an expert we spoke to wasn't completely sure about how to react to this scenario.

"Do you make a [Child Protective Services] report based on that?" Pinero said in a phone interview. "If you don't follow up with that, are you still liable if something happens?" He said that a social worker, caregiver or someone else in a position of responsibility would need to "seriously consider" filing a report if they were to see a minor use an emoji indicating a form of abuse.

There's an awareness issue, too. App discovery is a big problem on iOS, so it's uncertain how someone experiencing violence would stumble upon Abused Emojis to begin with. (Pinero hadn't heard of it before HuffPost reached out to his organization.)

Another potential concern: Someone who does download the app could leave him or herself exposed to an adult who's able to access their device or App Store history. Its name, Abused Emojis, could raise questions. Ernhagen told HuffPost that BRIS had considered this possibility.

"[E]ven with a different name on the app, parents would eventually know what it is all about and making it hidden by using another name would probably not make a difference in the long run," she said.

Still, Pinero did say the app could do some good for those who discover it. He told HuffPost that Abused Emojis is a great idea, simply because it offers a new way for victims to express themselves about traumatic events, which can be difficult to put into words.

"The thing that excites me is it's still a way for someone to communicate a thought, a feeling, and not necessarily having the vocabulary for a starting point," Pinero said. "If something doesn't feel right ... and an emoji could convey for clarity or be able to initiate conversations, it's huge."

A former Child Protective Services officer himself, Pinero recalled difficult conversations with children who had trouble expressing the difference between a "good touch" and a "bad touch."

"Can you imagine having a way to express what a bad touch is instead of going through all of that? It's amazing," Pinero said.

Thus, the Abused Emojis app might be helpful for adults -- particularly those who work with children -- to keep in mind and pass along when necessary.

"Because of technology and communication tools, you're allowing the user to tell you how they need help. You're letting them start the conversation," Pinero said. "Instead of organizations saying, 'This is how you receive help,' it's, 'How does the person ask for help?' It's our job to make sure we're up to date."