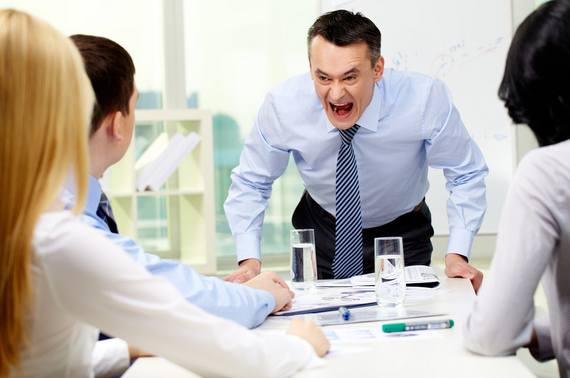 I've often written in The Huffington Post about the importance of understanding the role of negative, abusive or otherwise unhealthy leadership upon employees and a company's success. I've emphasized that addressing this all-too-pervasive problem requires seeing it within a larger context: a company's overall management culture. That is, it's not just an issue of individual leaders' and managers' personality flaws or pathologies.

For example, I've described here the ways that unhealthy management behavior and an unhealthy overall leadership culture become intertwined, and can reinforce each other. And here, about ways that subordinates can attempt to deal with them in potentially positive ways, as long as they are confined within them.

As if the damage of unhealthy management needs more confirmation, it's nevertheless helpful to see researchers confirm and add to the evidence that an unhealthy management culture harms efforts to create a well-functioning team; and therefore harms the entire organization. One recent example is from a Michigan State University study. It finds evidence that abusive managers create, in fact, tremendous conflict for work teams and damage their productivity -- not to mention the morale and commitment of employees.

This new study, conducted in China and the United States, documents that the toxic effect of emotional and behavioral abuse by managers is much broader than many have believed -- or have wanted to recognize. Lead investigator Crystal Farh points out that supervisors who belittle and ridicule workers not only negatively affect those workers' attitudes and behaviors, but also cause team members to act in a similar hostile manner toward one another. In effect, they model the behavior of the leader towards each other. "That's the most disturbing finding," Farh said, "because it's not just about individual victims now, it's about creating a context where everybody suffers, regardless of whether you were individually abused or not."

The study looked at such abuse as verbal mistreatment and demeaning emails. Not surprisingly, employees who directly experienced such abuse felt devalued and contributed less to the team. At the same time, the entire team "descended into conflicts," Farh said, which also reduced worker contributions. And, "Teams characterized by relationship conflict are hostile toward other members, mistreat them, speak to them rudely and experience negative emotions toward them."

Published in the Journal of Applied Psychology, this study also pointed out that companies tend to focus on individual employees; and limit their efforts to help restore self-esteem and confidence following abusive management behavior.

That tendency matches what I've often found in my consulting work with companies when they acknowledge and attempt to deal with damage done to employees. That reflects a limited understanding and approach to creating solutions. It only underscores the need to recognize how and why abusive and otherwise unhealthy leaders and leadership cultures arise and thrive to begin with. And, what will support the changes that promote high-functioning, healthy organizations and employees.