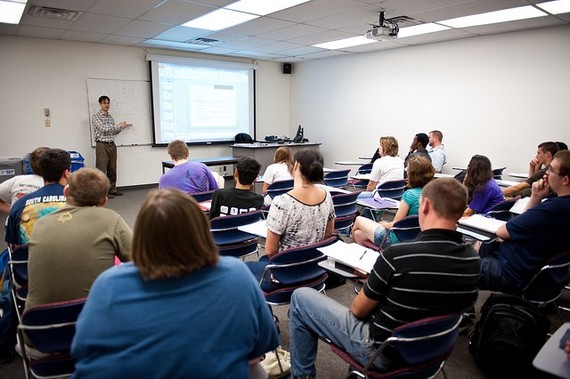 It's no secret that college tuition has skyrocketed over the course of a few decades, at a rate greatly surpassing that of inflation. Last year, the typical in-state undergraduate student paid $9,139 at a public university, nearly four times the amount paid in the 1980s. Meanwhile, students at private institutions faced average tuition costs of up to $31,231.

The Delta Cost Project, which collects information on college spending and revenue, attributes increasing costs to a variety of reasons. At some public universities and colleges, states have cut higher education funding and tuition is increasing to make up for it. When it comes to private research institutions like USC and Georgetown however, an overall increase in spending is to blame. And lastly to my friends at private liberal arts colleges, the hike in your tuition fees are largely due to increased spending as well as declining revenues from donations.

We know we're paying significantly more than our parents ever did to reach the same end goal -- a degree. So naturally, in true Michael Moore fashion, we ask ourselves: where's the majority of our money going? If your response has anything to do with learning, think again.

In 2011, nearly 51 percent of college faculty were part-time and about 19 percent were non-tenure full-time employees. These professors, better known as "adjuncts," earned between $20,000 and $25,000 a year from teaching, according to a 2013 report by NPR. Adjuncts typically supplement their teaching salaries with other jobs, but surprisingly, many also receive public assistance. A recent UC Berkeley report, "The High Public Cost of Low Wages" found that 25 percent of part-time college faculty receive government aid in the form of food stamps and Medicaid.

All the while, those at top benefit greatly. At USC, President C. L. Max Nikias earns almost $1.6 million a year. Athletic Director Pat Haden's salary in 2013 was $2.5 million. Given that 65 percent of USC faculty are adjuncts, the salaries of Nikias and Haden are ridiculously high. Yet by no means are they astonishing. A report from the Institute of Policy Studies found that between 2005 and 2011, the number of adjunct faculty increased 22 percent faster at the 25 state schools with the highest-paid CEOs...I mean presidents, signifying that at such institutions, administrative costs are being offset by cheap labor provided by adjuncts.

Income disparities are bound to happen in any business, but when they are this large and occurring at educational institutions, priorities are definitely called into question. Do we care more about receiving a quality education or football wins?

A week and a half ago, USC announced that it plans to spend $270 million to renovate the Los Angeles Memorial Coliseum. USC officials say they don't have the funding for the project yet, but I'm sure that won't be too big of an issue. After all, from the looks of it, USC had no problem finding the $900 million needed to upgrade University Village.

In light of all these new capital-intensive projects, it pains me to see that our education remains broken. This is extreme capitalism, no? Maximize profits at the expense of those without any control and worry about the consequences later.

Despite how ill-fated the future of higher education may seem, there's still some hope. The Service Employees International Union (SEIU) has signed a handful of contracts to increase the wages of contingent faculty members. At Tufts University, adjuncts won a salary schedule that would lead to $7,300 per course in 2016, not including benefits. Moreover, professional unions such as the National Education Association, American Federation of Teachers, and American Association of University Professors have recently taken up the plight of increasing wages for adjuncts.

As for USC specifically, the Undergraduate Student Government has set out to increase transparency by pushing for interactive websites and infographics that can help students become more informed on the university's financial model. Perhaps, once students see the distribution of their tuition dollars, a more democratic system can become a reality -- one where students hold officials accountable for the ways their money is spent.

For now, we can only hope that we don't end up working for our alma mater when we graduate. Then again, even if administrator salaries are trimmed to improve the demeaning of adjuncts, we'll still live in a world of the haves and have nots, right?