Like Fantine, I too, dreamed a dream! It was to create the first ever, custom designed Academy Awards envelope.

For as long as I can remember, (yes, I still vividly remember the infamous year when the ever eloquent David Niven's speech was interrupted by a streaker), I've tuned into the Oscar telecast. Whether it was with family, friends in college, fantastic parties in Hollywood, the Academy Awards show continued to remain a favorite annual celebration. Growing up on the East coast, and seeing the glamour and excitement brought into my living room each year felt as if I'd been transported to a different place and time.

The Oscars were magical. No, actually, they were more than magical; they were otherworldly. As a couture invitation and social communications designer, it troubled me that when THE Academy Awards envelope first appeared in 1941, it had less stature than a Cecil B. de Mille extra. A fabulous Hollywood makeover was clearly in order.


"The envelope please" had become synonymous with the Academy Awards, yet there had never been a specially designed envelope and card to announce the Oscar recipients in a manner befitting of this pinnacle moment.

In 2011, through the support of Oscar winning producer Bruce Cohen, production designer Steve Bass, and of course, the Academy, was given an opportunity to create something truly iconic. A dream come true, to say the least, and instead of tuning in, I attended. Flying high, I clearly remember Tom Hanks, the very first presenter, noticeably taken with the glamorous golden envelope in his hands, paused, then commented, "This envelope... is a work of art."

To be able to create "the envelope" felt like a beautiful gesture -- an enduring way to commemorate the importance of this illustrious event. In my Los Angeles design and production studio, I began the creative adventure to scour the globe for just the perfect materials, exploring different design directions to present to the Academy.

The design ultimately selected is completely hand-crafted from an opulent, iridescent metallic gold paper, complete with a high-gloss red lacquered line featuring a step-and-repeat pattern of the Oscar statuette hand-stamped in satin gold-leaf. White gloves are worn, handling each piece as if it were a fragile, objet d'art.

The outside of the envelope and flap is an art deco-inspired satin gold leaf, deeply de-bossed inset that frames an ecru plaque bearing the name of each award category in rich charcoal ink.

Inside the envelope, a heavy-weight ecru card features deco gold-foil accents that are then accented with a gold-leaf embossed Oscar® statuette, along with the phrase, "And the Oscar goes to... "

The winner's name is printed in charcoal ink and mounted onto a matching, red lacquer hand-wrapped frame. Not to exclude the viewing audience, the back of the card introduces a new feature, the specific award category visible to everyone watching from home.

Each envelope is securely fastened with a rich red double-faced satin ribbon complete with an embossed, custom PricewaterhouseCoopers (PwC) red and gold lacquered seal of authenticity.

Through the combination of precision execution and unique one-of-a-kind materials we found a way to create not only a timeless envelope keepsake, but to protect from it being duplicated or forged as well.

The most amazing of all thing to consider however, is that for something so exclusive that is handled by only 24 presenters and award winners, and seen by nearly a billion people around the world, this envelope now easily has the stature comparable to any leading actor or actress.

And for those of you who may developing a case of "envelope envy" as you read this, have no fear. You can bring Oscar home, by hosting your very own Oscar bash, with an exact digital replica (along with nine other supremely stylish) Academy sanctioned, online invitations from The Oscar Collection by Marc Friedland, exclusively on Evite Postmark. 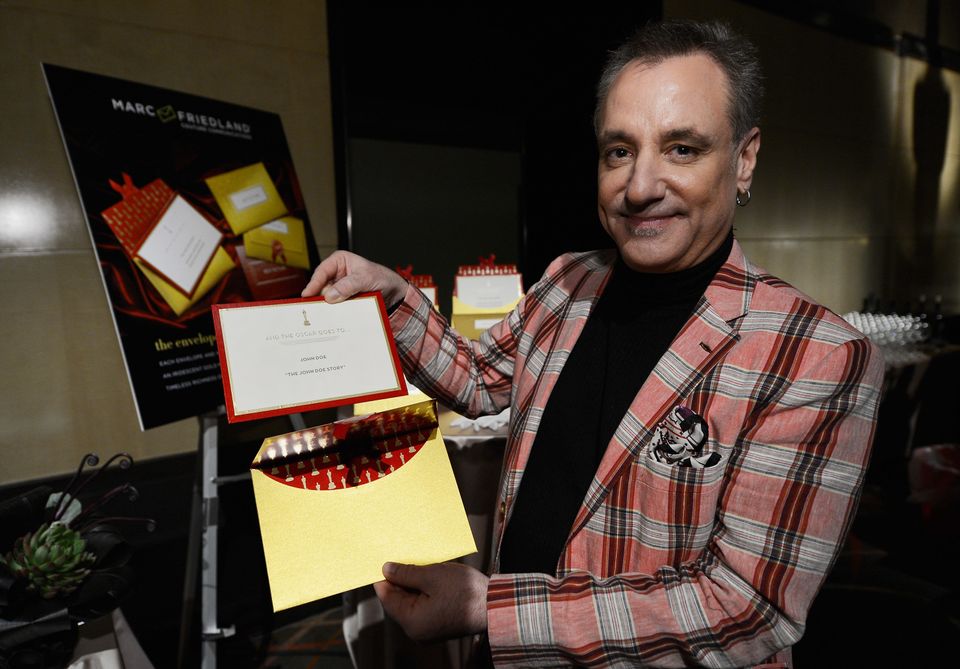