We've all experienced how the Internet has changed our lives in the way we work, play and communicate with family and friends. We see how institutions are becoming more productive, offering new services and helping transform education, health care and the places we live.

While these changes are visible and clear from this personal perspective, some question the impact of the Internet at the national and global levels. A new study by Deloitte and GSMA, "What is the Impact of Mobile Telephony on Economic Growth?", using Cisco data on mobile broadband traffic tackles this question and finds that countries can accelerate economic growth and productivity by increasing mobile broadband Internet adoption and usage.

This new report builds on the growing body of economic analysis linking information and communications technologies (ICTs) to national growth by analyzing the economic impact of various mobile technologies:

But there is still much room for growth. Mobile broadband subscriptions amount to only a fraction of the 6 billion mobile phone subscriptions in the world. This gap between mobile phones and mobile broadband highlights the opportunity to connect more people to the Internet. Closing the gap will require a collaborative approach between government policy leadership and private sector investment. 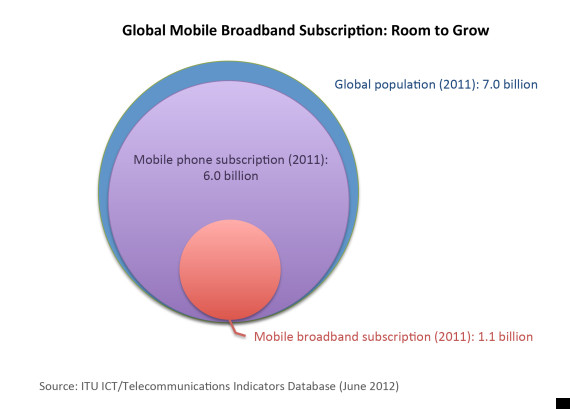 At the same time, the private sector can drive infrastructure development, device development and adoption and service delivery in a competitive and innovation-driven environment where consumer benefits are the priority.

At the end of 2011, 119 countries had developed national policies to encourage broadband deployment and adoption, according to the United Nations Broadband Commission. Recognizing the positive impacts of high-speed connectivity, these countries (as well as others still in the process of developing national broadband plans) are taking concrete steps toward increasing high speed broadband. Armed with the new Deloitte-GSMA-Cisco study, governments, businesses and individuals can take greater steps in advancing mobile broadband, secure with the knowledge that mobile broadband accelerates economic activity, growing nations and benefitting individuals.