I recently had the pleasure of speaking with not one, but two incredible CIOs: the present CIO of Accenture, Andrew Wilson, and retiring CIO, Frank Modruson. Being CIO for a $28.6 billion dollar consulting company that enables 275,000 employees in more than 200 cities in 54 countries to work anytime, anywhere to serve clients in more than 120 countries is no small feat. But similar to Olympic athletes, these two CIOs make it seem easy. Modruson has transformed IT into a strategic asset for Accenture and will pass the baton to Wilson, who will ensure that Accenture remains at the forefront of innovation as a digital business, which will ultimately mean replacing everything that Modruson has done, a fact that the former CIO is quite happy about. 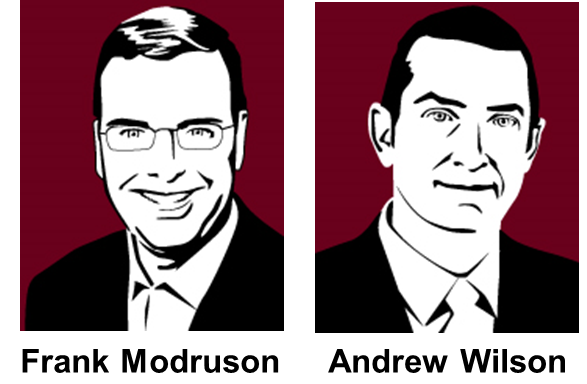 It is wonderful to imagine an outgoing CIO that seeks to leave his legacy not by clinging to the technology of the past but by embracing the fact that technology is constantly changing, requiring a constant renewal of IT. But I guess it's not all that surprising, coming from a CIO that always has the best interest of the business in mind even if it means allowing himself to stand corrected by his employees while being interviewed live on our last episode of CXOTalk! When Lauren Brousell, Staff Writer for CIO Magazine posed a question about Accenture's use of gamification for employee training, Modruson said it was still in the formative stages. Within seconds he was otherwise informed by several of his employees that pinged him with examples of their use of gamification for employee training.

Modruson and the employees at Accenture demonstrated to us that the right technology, together with the right culture, can have the power to flatten an organization and break down silos to enable real-time communication. The saying goes that 'no one of us is as smart as all of us', so with that in mind I give you Modruson's and Wilson's advice for leveraging technology and culture to increase the pace of business.

7 Ways to Turn IT into a Strategic Business Asset

1. Cultivate a culture of agility - While the role of CIO encompasses a lot of diverse areas from the infrastructure to all the apps that allow the company to operate on a daily basis, everything is done with the goal of transforming Accenture. Modruson says that IT is transforming the way they work and interact by constantly moving the company into the future through the constant renewal of IT to change important aspects of the business. Modruson advises that as you go to the future you need to be very cognizant of getting rid of 100% of the past. He says this is where a lot of organizations trip up, they move to the new stuff but don't retire everything from the past and then they have this legacy of little problems that keep popping up and getting in the way. He stresses that even though it is hard, it is incredibly valuable to do it.

2. Use aggressive standardization and regular refresh cycles - This idea seems attainable for smaller businesses, but much more daunting at a large scale. According to Modruson, aggressive standardization and regular refresh cycles is not as hard as you might think. He says that one of the hallmarks of their IT is not only the fact that is it brand new, but it is also the least expensive IT in their industry. While this may at first appear to be a bit of an oxymoron, in reality the new technology is always cheaper than the old.

Wilson says that IT can be renewed successfully when there is a clear mandate from the top to act and take action and when local enforcement, automation, management and monitoring is standard. He adds that effective governance with your client base is also important. "Large multi-national scale is something that we are used to, so by practicing as a company what we set out to do with our external clients, our clients feel safe," says Wilson. There is a fine balance between encouraging creativity, mobility and freedom while at the same time, from an enterprise perspective, governing overall risks and security. He says this balance will be harder to deliver for a business that feels under pressure to demonstrate innovation, so the CIO will have a very careful governance role to ensure that IT does not leap before they are ready, and when they do, ensure that they leap in an aggressive and long way.

3. Enable and promote cross-functional collaboration - Mobility is no-doubt a top megatrend for Accenture who has about 300 locations of their own around the world, in which about half of their employees work. The other half work somewhere else around the world, at an astounding 10,000 different, non-determined locations! However, Wilson feels that the megatrend that is most impacting this IT transformation (even on par with mobility) is the demand for mission-critical services. Collaboration on a huge, sophisticated scale is the way we all talk every day. Accenture has well over 100 million minutes of activity every month through something which has to be mission-critical. This forces IT to completely reimagine the nature of the frontline service interface to clients and end-users that are on the move and want to access it through a variety of mobile devices, and also want to be able to collaborate with their clients through it. This in turn layers in security, which becomes yet another megatrend for IT organizations.

4. Develop a deeper understanding of the business - If IT wants to be relevant to the business, they need to have a very engaging dialogue with the business. Accenture has an IT steering committee composed of the COOs in the company - the people that run Accenture on a daily basis and act as the governing body of IT, guiding them on what is best for Accenture. The CIOs spend a lot of time interacting with them and then they go down into the business and work hand-in-hand with the business people, because ultimately IT exists to help Accenture operate better. In doing this, they have seen the barriers between themselves and their clients go down and more integration happening across the firewall for their people around the world.

Modruson tells us that teams are often made up of anywhere from 5 to 500 individuals from all around the world who come together, physically and virtually, to serve a client and it is the technology that brings it together. He says, "For IT to be successful, we need to be constantly talking to our end-users and getting feedback.

5. Promote an open and adoptive culture - Accenture naturally has a very adoptive culture made up of technologists that like technology. They are lucky to have a very adoptive leadership culture as well, because according to Modruson, "it's the tone from the top which cascades down." One of the things they have found to be successful is the gamification of the adoption of technology. At their global leadership council, made up of the top 150 leaders in Accenture, IT displays all the stats on who's blogging, video and audio minutes, etc. and recognizes and rewards the top people in each category. Everyone gathers around to see where they stand in comparison to their peers, promoting a fun competition. They also track the same stats for all 275,000 employees on their internal people pages.

Modruson, who introduced this concept three years ago, warns that you have to be careful how you do it. They started with a small group and rolled it out in waves, building on the initial interest. They are careful not to embarrass anyone and focus on displaying the top-end numbers. "They key is to make it positive and focus on the accomplishments. If your culture is open to it, it works well," says Modruson.

6. All businesses are digital businesses - These two CIOs operate on the idea that every business is a digital business. They view it as their job to help the business executives understand the value and benefit of operating as a digital business and just how mission-critical and vital it is to staying in business. They lead by example by running IT as a business, one of the technology mega trends of 2013. Wilson says, "The role of the CIO as order taker, back office and mere cost center is long gone. The CIO of today and tomorrow is that of an internal consultant or coach bringing innovation and ideas to the business and an orchestrator of the various technologies that don't always integrate." It is no question that the technology will glue businesses together more and more fundamentally in the future, placing the CIO in a powerful and influential role. The question is, can CIOs adapt to this new role and navigate the social enterprise?

7. Partner with all areas of the business - Despite some saying that the CIO will eventually report to the CMO, these two CIOs are not convinced. According to Wilson, "The CIO works with the entire business so it will never be the case that the CIO works in one function alone." That said, they do work very closely with the marketing function, who are the biggest users of the technology they provide. Wilson says that over the years marketing has been very demanding, very articulate and extremely fact based about what they need. They are very analytical and the technology that IT provides fulfills the analytics side of it. A recent Accenture study found that there is a disconnect between CIOs and CMOs, but fortunately this is not the case at Accenture. "It is a very good relationship, but again, we serve everyone," says Wilson.

In a world that is constantly changing, Modruson offers sound advice: "You have to change with it and embrace the change." The fact is, if you are not becoming more and more digital then you are going to die. You've got to keep moving and according to Modruson, that is a beautiful thing, "The beauty of technology is that it keeps getting better, we can automate more things and take the friction out of business." According to Modruson, we are on the prefaces of a new wave of technology that will revolution the enterprise. He says that in 10 years the landscape will look completely different that it does today. So in his words, "embrace the change because it is going to be a wonderful ride!"

You can watch the full SAP sponsored interview with Andrew Wilson and Frank Modruson here. Please join me and Michael Krigsman every Friday at 3PM as we host CXOTalk - connecting with thought leaders and innovative executives who are pushing the boundaries within their companies and their fields.