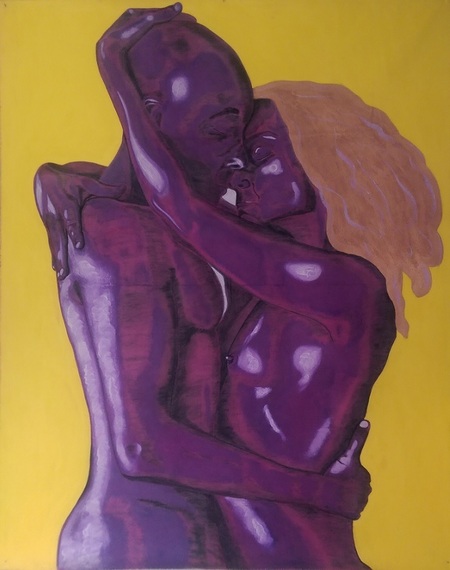 The eyes perceive what the mind seeks, so I saw romance among regular people -- those who were born the right way -- everywhere I looked. To justify being single, by the time my boyfriend The Musician and I met, I had trained myself to stop believing that a man could love a transgender woman, at all.

Excusing my flaws under the blanket of gender identity was easier than wrestling with them. I threw in the towel, and, over time, the resignation in my heart aged into acceptance.

The humility came in exponents as I assented to aspects of being transgender that I had resisted before -- not least that accepting my freedom meant giving up daydreams, or at least letting go of what could have been.

I accepted the anger that flowed from being born wrong, and the sadness of solitude that followed. For years I thought that these sentiments separated me from others, but disclosure helped me to understand that perhaps anyone can relate to moments of feeling less than. What made me different was also what made me the same: I was unique, but not unique in being unique.

I accepted the male-to-female ratio for my age group in New York, which conscripted me to an uphill swim to find intimacy, even putting the whole transgender thing aside. This exercise in futility would keep me lean, and the water was fresh from the source higher on the mountain anyway -- or so the consolation went. I came up with all sorts of myths to mollify my ego. The moral of each: a state worse than idle is bitterness.

When intimacy did materialize, I accepted relationships -- if interactions relegated to superficiality merit the name -- in which I was devalued. I did a disservice to being transgender by accepting such acceptance to be my fate without any reason other than the malaise of discontent.

To avoid the emptiness behind this facade, I accepted that I could always turn my hand to work when everything else went to shit. In legal filings and in the courtroom it was my brain that mattered -- and who I was as a person became irrelevant. But not really -- individuality is always relevant: even in law, what matters beyond the facts of any case are the human beings upon whom those facts depend.

The upshot of all this acceptance was hogwash: I accepted nothing, not truly -- I just relinquished hopes and desires.

Without the baggage of idealism, I did not have to check in as transgender anymore. I was free to fly unencumbered among daydreams that once again promised escape.

My life effervesced in denial. I resumed traveling a lot, flying across the country at least a couple times every month, and elsewhere in between, and I stayed busy with trials and cases on both coasts. I read tomes I'd been meaning to get to or get back to for as long as I could remember. And, at the encouragement of a journalist and a judge, I wrote a (forthcoming) book of my own.

Canyoneering the past typed onscreen, I came upon a vantage point at a peak of the mountain I'd been swimming up all the while. Memories up to then connected into a constellation of existence within perceptibility but beyond comprehension. Peace glued a universe of pieces together. The concert of acceptance had struck up, this time for real.

The Musician and I danced with one another more than once before we ever spoke. I have learned from the courtroom that the best part of words is the space between them; and now, on the dance floor where we met, communication dispersed with those strictures altogether.

Words lost meaning for me at that point. So I picked up a paintbrush and some oils, and I made a painting about acceptance of how love is what's left unsaid.

Zoe's forthcoming book is There Is Room For You -- Tales From a Transgender Defender's Heart.