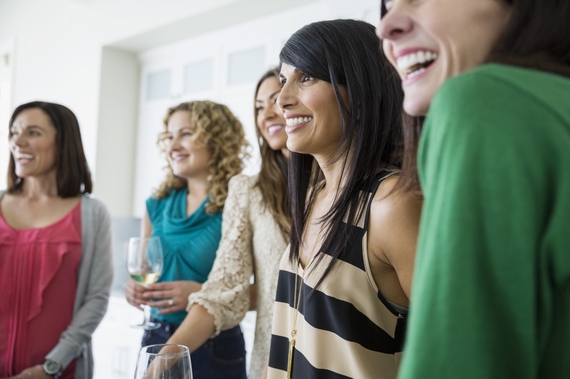 I secretly hate networking and, even worse, networking events. To tell you the truth, almost every working mom I know feels the same way. We feel so overwhelmed by our busy schedules that we don't want to add one more activity to the lineup. In those rare moments when we have "extra" time, we'd like to spend it with our families or do something for ourselves.

To make matters worse, official (often synonymous with forced) networking events can be terribly awkward. They conjure up memories of the bar scene back when I was single, navigating uncomfortable conversations, feeling awkward about introducing yourself and dealing with networking "pros" who seem so insincere.

But the truth is, a strong network is one of the most important assets when it comes to career success. According to the U.S. Bureau of Labor Statistics, 70 percent of all jobs are found through networking. When executives are looking for their next key hire, they first consider people they know or have wanted to work with. The problem? Women seem to be lagging behind men in this critically important skillset.

According to LinkedIn, men are more savvy networkers than women, as they generally have larger networks and more interaction. It makes sense, as golf tournaments, skiing and camping trips certainly help develop one's relationships. But I find that ironic, because female networks have been the foundation of societies for generations, from gathering at the local water source to congregating at sewing circles to dominating social media. There's no reason women can't be as strong of networkers in the business arena as well.

For those of you who cringe at the mere mention of a networking event, I have good news: there are other ways to build strong networks. Everyday activities are often the best channel for networking, and a few small changes in how you approach these daily interactions can add value to your relationships. For example, I found a great connection to my current employer by serving on a committee at my son's school. And some of the most impressive people in my LinkedIn network played on my intermural softball team.

Here are four reasons why getting creative with networking should be at the top your priority list:

Finding great talent. On my current team, I've sometimes found it difficult to fill key roles, not because the talent doesn't exist here in Utah, but because I don't yet have the network I did in Silicon Valley. As you connect with more individuals in your area, you'll improve your chances of hiring the very best.

Gaining new insights. Joining a peer group facing similar challenges can be extremely beneficial, offering ideas and solutions you might not have ever considered before. Recently, I joined a group of female executives who meet once a quarter. These gatherings have been invaluable to discuss unique challenges I am facing with like-minded individuals.

Landing opportunities. As the majority of jobs are found through networking, you're likely to land your next job through one of these connections. But efforts like personal brand building and community involvement can also help a current employer take notice and better recognize your talent.

Paying it forward. Networking is a massive opportunity to connect with fellow female professionals so be sure to help others succeed as well. For example, I recently co-founded Women At Domo, a quarterly get-together for women at my company. I am also involved in Utah's Women Tech Council. These types of groups and settings grant me the opportunity to support other women in their careers by sharing experiences and lessons I've learned over the years.

To develop a strong network, you don't have to drag yourself to every networking event you're invited to, but be sure to take the time to follow up with people you meet in your daily activities. Met an impressive "working mom" at your son's soccer game? Schedule a play date for your children that will allow you to get to know her better. Chatted with a woman at the gym that works for a company you are interested in? Connect with her on LinkedIn. Make networking fun and you'll find it pays dividends in future opportunities.