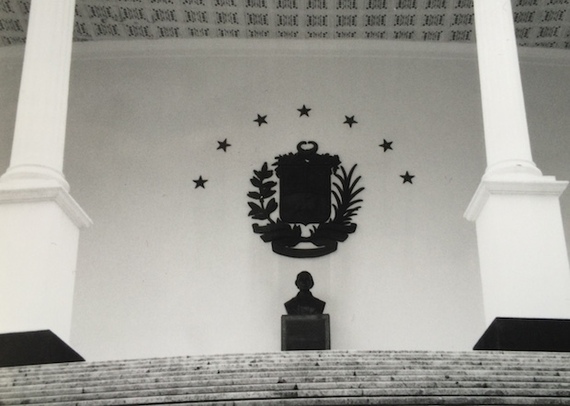 Like life itself, vacations don't always turn out how we plan. One of the most unpredictable experiences I ever had was in the 1990s, when my boyfriend and I took a trip to Venezuela. We planned to explore one of South America's less-visited cities and also spend some leisure time on the beautiful Caribbean island called Isla Margarita. But a coup attempt (by a guy who'd later become Venezuela's president) threw a monkey wrench into our itinerary. Interestingly, what would happen in the years following this attempted coup d'etat in Venezuela would lead the nation into even more complex political times, and keep it off the Latin America tourism map for decades (which also explains why you don't see much about Venezuela on my Latin America travel blog, LatinFlyer.com). Here's what it's like to vacation during a coup d'etat -- and to have your trip affected by Hugo Chávez, before most people knew who he was.

Caracas, November 27, 1992: Caracas was silent when we woke up. Angel and I had become accustomed to the noise from the traffic and the laughing maids and the guy who sang Spanish operas in the hallway at 7am. But this morning, everything was still. We looked out the window: no cars, no people, just some low-flying jets streaking overhead. Funny, we weren't near the airport.

I turned on the radio. "The situation is under control," the announcer said. "But all residents should stay in their homes." What was going on here?

Angel looked out the window again. "Those are military planes," he said. We laughed nervously as the radio confirmed our fears: We were vacationing in the middle of an attempted coup d'etat. Military rebels, led by a man named Hugo Chavez, had taken over a local TV station. Bronco fighter jets were carrying bombs over our heads. All constitutional rights had been suspended. Soldiers would arrest you on the street for no reason.

I took out my hoop earring.

Since our guidebook hadn't advised us on how to get the most out of a coup, we headed downstairs for answers. No one was leaving the two-star Hotel Ritz, and a woman in the elevator advised us not to, either.

The hotel's tasca -- a combination restaurant/bar -- had no windows; all eyes in the crowded room were fixed on the big, black-and-white TV over the bar.

It had started in the early morning hours, when we were heading home from Zig-Zag, a gay dance club with décor reminiscent of a seafood restaurant. At the same time that our caraqueño friend Javier was telling us about the coup attempt in February, 1992, rebellious units of Venezuela's Air Force, supported by leftist groups, were capturing two air bases. Rebel pilots then attacked the presidential palace and other military installments with bombs and rockets. They also captured some broadcast towers on the misty mountains overlooking Caracas and charged into the headquarters of Channel 8, killing anyone who stood in their way. From the studio, rebels broadcast a videotaped message from Lieutenant Colonel Hugo Chávez Frías, who was in prison for leading the previous failed coup attempt.

As a matter of security, the announcer now explained, the government had suspended many basic civil liberties. What rights had we lost during our ill-fated vacation? Freedom of speech, freedom of assembly, personal safety, domestic privacy, freedom of travel, the right to peaceful protest. Businesses were locked up. The airport was closed. Everything we'd planned for our visit was scrapped -- including, for the moment, leaving the country.

"But the situation is under control," the announcer repeated.

No one was reporting from the streets. Trapped in our little wood-grained haven, all we could see was talking heads; all we could know was what the TV told us. But the mood in the tasca was surprisingly jovial. Maybe the people laughed because they were scared. Maybe they laughed because they were bored -- after all, this was the second coup attempt in 10 months. The last one had resulted in 40 deaths and 1,800 arrests.

Maybe they laughed because they were glad. President Carlos Andrés Pérez was facing disapproval ratings of about 75 percent. Some said the government was corrupt. Some said the new free-market economic program wasn't helping the poorer people. And some felt the best way to axe these problems was to axe the government; some civilians had even joined the military rebels and cheered when the presidential palace was bombed. The jailed Chávez still ranked as one of Venezuela's most popular figures.

Venezuela's democratic system, one of the oldest in South America, was in trouble. Gone were the days of the "petroboom," when oil money provided fast and seemingly unending wealth for the nation. As if to reassure themselves, the politicians on TV the day after the coup attempt stressed that the upcoming elections on December 6 (which were not for the presidency) were to proceed as planned.

At 1:50p.m., we heard more jets flying overhead, followed by a distant boom. A few minutes later, a second boom enveloped our building. The tables shook. Everyone jumped up and ran for the door. Angel and I followed quickly, thinking the largely Venezuelan crowd at the hotel might know of a safe place to hide. Instead, we found ourselves in a crowd on the street, scanning the area unsuccessfully for signs of a bomb. "It must have been a plane breaking the sound barrier," one guy guessed.

When we returned to our room, President George Bush was on TV, denouncing the uprising and saying that the United States, which was Venezuela's largest single market for oil exports, would never trade with a military regime.

With Bush making statements on U.S. news shows, our families must have heard about the coup attempt by now. We should let them know we're okay, I suggested. But we couldn't get a long-distance operator on the hotel phone. No phone, no freedom. What were we to do?
Wait a minute. I'd seen movies where the U.S. embassy took endangered travelers under their wing, providing tea and sanctuary in big, chandeliered offices. Yes, the ambassador would surely treat us royally and deposit us in chauffeured Cadillac limousine with two little U.S. flags flying from the front fenders, just like the one Jackie Gleason and Estelle Parsons boarded in Don't Drink The Water (it was a two-star movie, but hey, we were staying in a two-star hotel). We'd be whisked off to a waiting private jet, arriving home to much fanfare and an exclusive interview with Connie Chung.

I dialed the embassy. There was no answer.

Left with nothing else to do, we took a nap with the TV on, the cathode ray serving as our lifeline to the outside world.

We awoke to more talking heads. "The situation is under control," the announcer repeated.

"The nation can change for the better without violence," the politicians urged.

"The majority of people want democracy," the commentators wagered.

Still no reporters on the streets, although anyone who needed to go out could do so, the news anchors said, as long as they were inside before a recently announced 6pm curfew. So we decided to venture outdoors.

The sun blazed on a hushed city. Construction sites for the newest Metro subway line sat empty and silent. Lonely avenues, lined with unfinished buildings and angular apartment complexes built during the oil boom, were disturbed only by the roar of an occasional green school bus filled with soldiers who pointed machine guns out of the windows. Hungry dogs with open sores rummaged through garbage that hadn't been collected. Handfuls of people milled about on the streets, like some movie about a post-nuclear holocaust society.

A crowd of civilians flocked around a pick-up truck filled with special editions of the newspaper El Nacional. We pushed our way through to see images of the coup attempt that hadn't made it onto the TV reports: burning cars, riots in the streets, lifeless bodies lining the halls of Channel 8.

On the way back to the hotel, a man standing outside an apartment building told us we should hurry home before the curfew. "They can shoot you if they see you on the street after six," he warned. "Walk quickly."

Back at the Hotel Ritz's tasca, the water had begun crossing items off the menu that they'd run out of, including bread and milk. If this continued, eventually there'd be no food left at the restaurant. Suddenly nervous about going hungry, Angel and I ordered more food than we could eat -- cold salad, rice and plantains -- and pondered the big question: Do you still have to tip the waiter when there's nothing left on the menu?

Food or not, the atmosphere was more relaxed; a dubbed Tony Danza had taken over the airwaves and "Who's The Boss?" was only interrupted once for a news update.

After dinner, we stood outside the hotel, wondering if we'd be shot the instant our toes touched the sidewalk. The city was cool, humid, quiet. A black dog rolled in the dust across the street. Along the usually busy Avenida del Libertador, a lone prostitute vainly adjusted her stockings, in what would likely be a rather long wait for her next client. Several blocks away, a hearse turned the corner.

By 10pm on Friday night, TV reporters had finally made it onto the streets. The coup attempt had not officially ended until the fighting stopped on Friday afternoon. The victim count included several inmates at a nearby penitentiary, where the coup attempt had inspired a violent prison uprising.

Stay tuned for the next installment, to find out how the U.S. embassy reacted when we showed up on their doorstep.