For the last 8 months that I've been coding Accint, I've noticed that people are as interested in the story of how I came to create it as they are in the app itself. Now that I've reached the point where I can start scaling up and attracting users, the technology's full genesis story can be told.

It started in January 2015, when I took my first coding class with Ricky Panzer, a coding wiz who graduated from Cornell in 2013. At the time I was working as an Editorial Fellow at The Atlantic. It was a yearlong Fellowship, and I was through 6 months of it and searching for a smooth transition for when it ended in June. After some soul searching over the Christmas holiday, I realized that there probably weren't 5 jobs in the world I'd rather do than to write for The Atlantic, but this still wasn't it.

What I really wanted was to be independent and to pursue my own vision. For that to be possible, I'd need some sort of skill. I'd had ideas for websites and apps in the past but had been stopped short when it was time to find a programmer. They're so in demand that a reliable one is hard to pin down, no matter who you are. And even if I found one, it would mean the project would be less independent than I'd like for it to be. I didn't want to have to rely on anyone else, so I enrolled in an Objective C class. 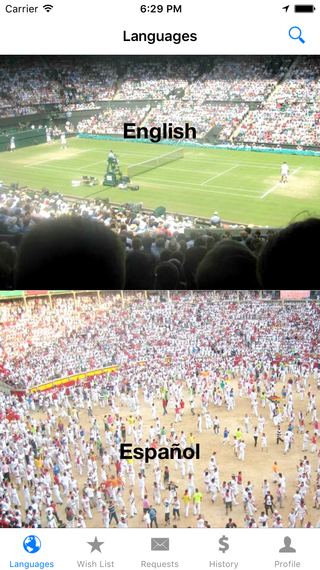 It was a 36 week class, but I paused it a few times, so it took until November 2015 to finish. In the first few months I learned the basics. What a string is. What an array is. What Github, Xcode, and Stack Overflow are. After a bit, Ricky guided me through building a replica of Instagram. Then I built basic chat and map apps. It was very frustrating. The most difficult part of learning to code is spending six hours trying to figure out why it isn't working and then learning it's because the string on line 412 was lowercase when the first letter was supposed to be capitalized. Or because I missed a semi-colon at the end of line 698.

The more I coded, the less frequent these kinds of errors became. By October 2015, I was a serviceable front-end programmer and was ready to start on an independent project.

Luckily I knew what I wanted to build. I'd spent the three months since the Fellowship ended in June throwing ideas at anyone who'd listen. I liked the sharing economy model because there was an obvious revenue stream. If money is transferred on the app, I'll be able to take a cut. To me that sounded less messy than relying on advertisers to one day contact me after I'd amassed hundreds of thousands of users.

I wanted the idea to not only be a viable business but to also encapsulate my story in some way. I knew it'd be hard to finish such a lofty pursuit if I wasn't innately passionate about the product I was creating. There's very little that I love more than both learning languages and the type of cultural exchange that a new language can catalyze. I attained Spanish fluency in high school. In college I took Portuguese and studied abroad in Rio for a summer, ultimately reaching a conversational level. In my last two years of college, I took French. After graduating, I lived in France for a year. This is the space I wanted to be in. In a perfect world, I'd be able to apply the sharing economy model to language learning. 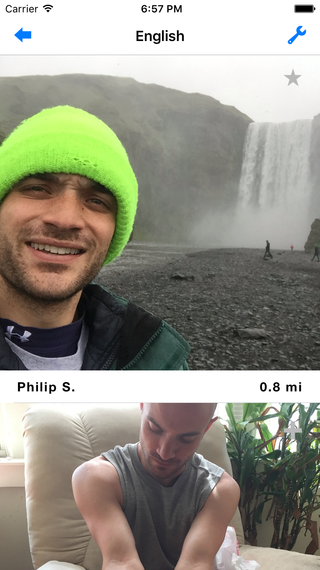 An integral part of learning a language is talking with native speakers. Not only for learning the language, but also for maintaining it. I'd lost the ability to speak Spanish after four or five years of not speaking it. Same with Portuguese. When I returned from France, I enrolled in classes, where I was with four or five other Americans, most of whom were twice my age, doing subjunctive exercises. It was uninspiring. All I wanted was a way to talk with native speakers, and that was so goddamn hard to do.

So I decided to create an iPhone app that connects language learners with native speakers. There are language exchange websites out there, but I didn't like any of them because they were so crusty. Conversations mostly happened over the phone, and it was exchange based, so I'd speak in English with someone for 30 minutes, and then we'd switch to French for another 30. What I wanted was an in-person conversation with someone from France who was around my age and who it looked like I'd get along with. I'd much rather pay for that than do a language exchange or take a class with textbooks.

As for the supply side, if people are willing to give up their apartments for $100 a day, I'm betting there are people who'd spend an hour speaking their native languages for $20 or $30. I know I would. There's nothing easier for me than speaking English.

And so the idea was there. I just needed to build it. By the end of November I'd designed a basic front-end model for the app. Then the real fun began. I needed to learn how to work with servers and databases. Ricky suggested a backend to store data. Integrating it into my app took until early January. Then I needed to add functionalities, such as login, messaging, photo storage, reviews, push notifications, and payments.

By early February I'd finished it all except payments, which turned out to be more of an ordeal than anticipated. I researched Stripe and Braintree, the leading payment processors. I chose Stripe because it was more user-friendly and had better documentation. It became obvious, though, that I'd need to learn a new programming language in order to use it. Web servers are more secure than mobile devices, so Stripe can't be implemented using basic Objective C. Ricky helped me learn and integrate Node.js into my app, a process that took around a-month-and-a-half, during the coldest, grayest part of the year. It was the nadir of everything. 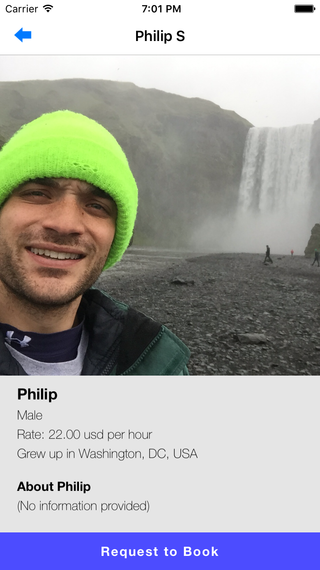 At that point, having been, by conventional metrics, unemployed for 8 months, I was getting impatient and just wanted to be done. I wanted to switch from unemployed to self-employed as quickly as possible. The hardest part of the whole process wasn't spending six hours searching for the missing semi-colon, it was the isolation. I worked from my apartment and from different coffee shops most days.

Though I was unemployed, I was the opposite of disengaged. I saw what I was doing as school. If you want to be an entrepreneur, I deduced, you have to take a break from Institution Gliding for a bit. But skepticism loves to target the unaffiliated.

"How long is it going to take?" It could take years (smirk).

"What happens if it fails?" I don't know. I hope it doesn't fail. (Most companies fail.)

That this was so hard was actually empowering because I saw that it required a high tolerance for shame, and I'm among the most shameless people I know. My friends and I one time a few years ago between squash games were trying to figure out what our biggest natural advantages were, and it was deduced that if I were to end up anywhere it would be on the back of my pure, unadulterated shamelessness. A more ashamed individual would have a hard time handling the emotional repercussions of more than six months with a murky employment situation and without very good answers to basic questions, such as "what do you do?"

So after a-month-and-a-half, I figured out how to process payments with Stripe, and the app was complete. I visited my brother in Austin for a week to get away from everything. When I came back, I started fine-tuning the design and working out all the bugs. By late April, I'd started asking friends to download beta versions of the app. I designed a logo, incorporated the company, and designed a Wordpress site. Finally, in late June, I took it Live.

Since then I've continued fine-tuning the technology, but most of my energy has been dedicated to figuring out how attract users. Great, it's here, now how do I get people to use it? If there were an easy answer, everyone would do it. It's going to take a lot of scrappiness.

If you've read this far, the best way to support Accint is to download it AND advertise as a native speaker, even if it's just English that you speak natively. The biggest challenge at the moment is to make it look less empty. It's a chicken-egg conundrum. Apps are supposed to be cool, but it's inherently uncool if there aren't any users--so how does an app get users?

And there's reason for optimism. Within 24 hours in the App Store, I got my first random downloader. It was a Chinese guy living in Brisbane. He downloaded the app, created a profile, and advertised as a native Mandarin speaker. I saw this and sent him an email letting him know he was the first downloader. I told him it was unlikely to reach Brisbane for a while but that that I'd love his feedback so that in a few years, when it does reach Brisbane, it'll be something he uses every day because it had been designed specifically for him. He was flattered and was very helpful.

Interacting with him was inspiring. It confirmed that there are people out there who want this product. I just need to figure out how to get it to them.