"The first thing I would say is that it is so much better for a woman to be an artist these days. Not excellent. Not great. Just better. So much better than when I was training as an artist and entering the art world. I experienced unbelievable sexism, for example, when I was doing my MFA degree many years ago. Today, my hope is that this is less the case with women getting degrees. As women and artists we have to find and hew to our vision. We need to be in a community of artists and visit each other and talk about our work. That is my advice to artists these days: find or build a community of artists. That is what will sustain you."

Though she has called New York home for many decades now, Margaret Evangeline was born in Baton Rouge, Louisiana, and those Louisiana roots are still very much a part of who the artist is today. She remembers growing up with a Cajun-speaking grandfather who taught her that a gun was an instrument of survival and had her shooting from a young age. She remembers, too, eating a lot of squirrels as a child in Louisiana and shooting at tin cans. Eventually, when she had her own children - three boys - she took her children out to shoot tin cans as well, and once, when one of her sons brought back one of the cans to show her, she remembered thinking that the gun hole in the can looked like a flower.

It was in high school that Evangeline's interest in the visual arts became solidified. She went to a Catholic girls' school taught by several international nuns, and for her that time was very freeing. "What happened in high school was that I had the support of women, and my making art was very much encouraged, if in a very traditional kind of way. There was a great big art studio in the cloistered part of the convent and that studio had such lovely light. I learnt the fundamentals of drawing and painting in that studio," she said.

After high school Evangeline had her heart set on going to college in New York, but her parents were equally adamant that she would not go to college so far away. She ended up at Louisiana State University, where her father (an engineer) and her mother (a teacher of English at the State School for the Deaf), had both gone. At LSU Evangeline started out studying literature, but got married and left before securing her bachelor's degree. She and her husband moved to Big Springs, Texas, and the next several years of her life would be taken up with having and raising three sons. Of that time, she now says, "I was very busy all the time and there was no art during that time."

Eventually, she and her husband would move back to Louisiana, this time to New Orleans, and when her youngest child was in first grade, she felt, finally, she could finish her college degree (something she had always wanted to do) and return to making art.

She went to the University of New Orleans, where she studied painting. Shortly after she got her bachelor's degree, the school was starting an MFA program and she was among the first five students - and the only woman - in the MFA program. The critiques, she recalled, were particularly sexist and painful. "Perhaps the best thing that happened for me, though, in that program was that the director of the program talked about Klein and Rothko and the artists associated with the Cedar Bar in New York. Rothko had recently taught at nearby Tulane University. Prior to my introduction to these artists, I was mainly doing portraits, and my mother would never quite understand what happened to my art after my introduction to those artists because, after that, my work became progressively abstract. My mother would always ask me, 'But what happened to the portraits of the children?'"

To cause even more consternation, her mentor was abstract expressionist painter, and fellow Louisiana artist Ida Kohlmeyer, whose influence, too, was pulling her more and more towards abstraction. Said Evangeline about Kohlmeyer: "I really loved her work. Here was a woman doing what I wanted more and more to do."

After completing her graduate degree, Evangeline taught art for a while at the community college level, all the while continuing her own work as a visual artist. During these years her life was changing in dramatic ways - her sons grew up and started their own families, and she and her husband subsequently divorced. It was then, finally, that Evangeline gave into her long-suppressed desire to visit New York City. "I came on what was supposed to be a short trip to the city. I did not know anyone here except for a dealer I'd had from New Orleans," she said. "I had a show here that got a great review in Art in America. Slowly I started to meet people. Then, before you knew it, I had a studio and now here I am so many years later!"

Evangeline's work changed radically with her move to New York City. "At the time when I was painting in New Orleans, you had to have a face or a reference to a narrative in the picture," she explained. "This was not at all the case in New York. After being in New York for a while I found that what I was doing was exploring the line more and more before I finally came to believe that all meaning came from how you touch the canvas and letting the paint do what it wants to do and be what it wants to be. Almost as though the work and the paint are an extension of the body."

From these ongoing investigations of the line would emerge her truly explosive series of camellia paintings and gunshot works.

For the artist, her camellia flower paintings reference her childhood in Louisiana, where the flowers grew in abandon. But the flower also harkens back to her friendship with the abstract expressionist painter Fritz Bultman, with whom she would take long walks in a giant glass conservatory full of huge plants.

"For me the work with the camellias has a New Orleans sensibility," the artist told me. "The complexities of New Orleans as at once becoming and falling apart are self-evident in that work."

Evangeline describes her gunshot work on metal as essentially being about mark-making. "I am always interested in the gap, the hole," she explained. "After September 11th the city of Santa Fe, New Mexico, offered a residency to any artist who had been affected by 9/11. I was affected and I went out to the residency. By then I was sufficiently troubled by the gun culture in the United States and I borrowed a few guns, got a donation of aluminum and started shooting into the aluminum. This work, which would lead to my inclusion in a show called 'Guns in the Hands of Artists,' got me back to my time as a young child shooting with my grandfather."

But clearly this work was about more than simply her childhood memories, and in fact also referencing the high murder rate by guns in New Orleans in particular, and indeed all over the United States in general, an assessment with which the artist agreed.

But as much as Margaret Evangeline laments the crime and violence that has engulfed her beloved New Orleans, she can also see outside of that rightfully problematic issue, to have a more wholesome and encompassing view of New Orleans. "You know," she told me, "when I was younger and working in New Orleans I often felt so alone. It is true that part of the reason why I moved to New York City was that I was looking for, and yes I did find, an artistic community. But New Orleans has come such a long way since then. I remember all throughout Hurricane Katrina how I paced the floor for days. Similar to what I did after September 11th. The city has its problems. But now, in fact, I am thinking to set up a studio in New Orleans, because these days there is a vibrant artistic community in the Crescent City, and that alone is saying a lot." 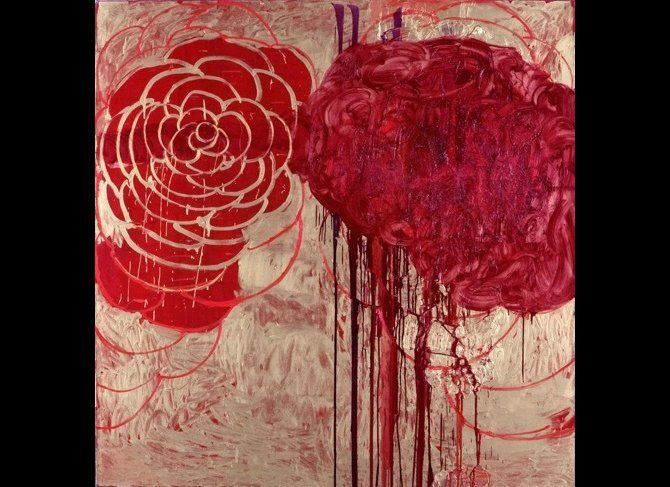