Like a lot of queer people, Daniel K. Isaac has a complicated relationship with his mother, Esther.

Esther is a devoutly religious Korean-American who doesn't approve of her son's sexuality -- and she isn't shy about telling him so. For a long time, Isaac grappled with how to deal with his mother's disapproval and constant comments about his sexuality. But then friends made him realize something powerful -- the way his mother communicated her feelings about his life and sexuality are actually hilarious. 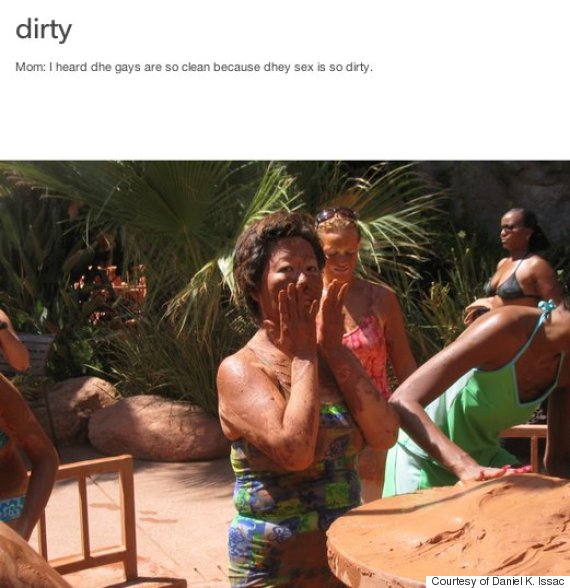 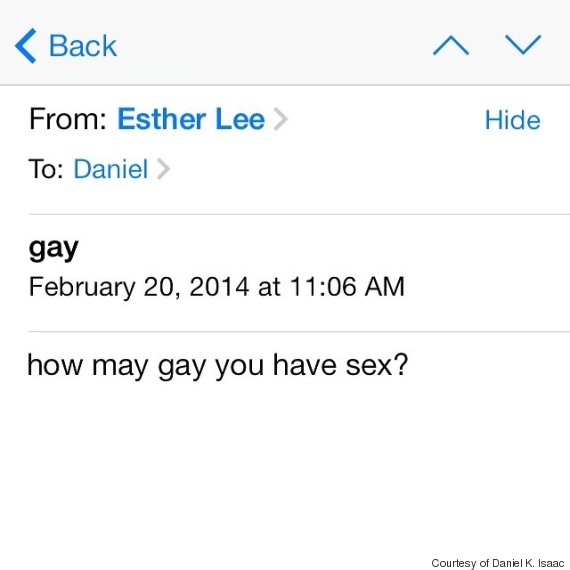 They're so funny, in fact, that Daniel created a hashtag, #AccordingToMyMother, which became a viral Internet sensation. This happened not only because of the comedic nature of their communication, but because of the visible exploration of the love between a mother and child, despite the way that cultural and religious differences can serve as a wedge in their relationships.

Now, Isaac plans to turn the #AccordingToMyMother sensation into a film, funded through a Kickstarter campaign. While his mother is embarrassed by the online attention she has received, especially with her living in California and Daniel in New York, she is fully supportive of the film and embraces the idea that art can be therapeutic.

The Huffington Post spoke with Isaac this week about why he decided to start sharing his relationship with his mom with the public, and what he hopes can be achieved achieve through this film. 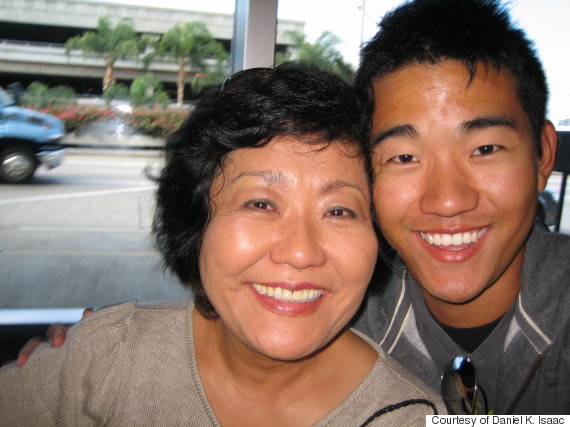 The Huffington Post: What made you want to start sharing your mom's quotes?
Daniel K. Isaac: Living on opposite sides of the country, the main form of communication my mom and I have is by phone. In order to limit the duration of these conversations, I often call my mom on my way to something: the subway station, work, rehearsal, or home. On many occasions, I would arrive at a destination while finishing up a call in front of my friends or castmates or coworkers and they would ask why I was in whatever emotional state my mother had put me in. I would recount the conversation, and rather than finding empathy or compassion for my plight, I would be met with laughter or utter shock and disbelief. It took an outsider’s perspective for me to realize how ridiculous or absurd and downright comical my mom sounded. When I learned to observe the hilarity rather than the negative arguments themselves, I didn’t mind calling my mom as much. In fact, I looked forward to it. I realized maybe other people would enjoy hearing about this too and see how a different perspective can radically change a relationship dynamic. So I took to Facebook and received more “likes” on those snippets of conversations than I ever did on a new profile picture. And that led to a Tumblr and an Instagram account and now a movie! 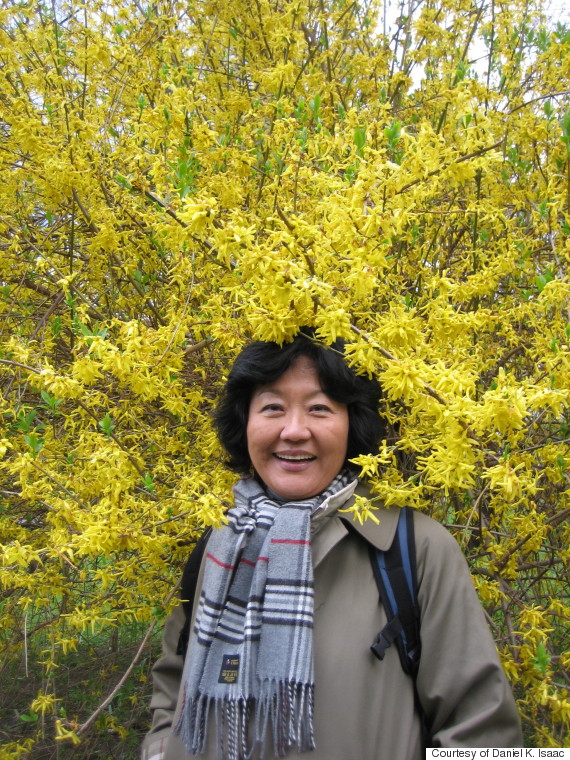 HP: What has the reaction been like?
I can no longer have a "mom-free" conversation. Instead of being introduced as Daniel the actor, I now hear, “You should add Daniel as a Facebook friend so you can read more about his mom.” People I haven’t spoken to in years will share embarrassing and intimate details about their family and their parental relationships or how they have been meaning to start their own hashtag or blog for "According To My Southern Mother" or "Sh*t My German Mom Says."

I have a handful of friends and old acquaintances who are reticent to express their support. I’ve been told #accordingtomymother is improper. Or I am airing my dirty laundry. Or disrespecting my elders. Or dishonoring a familial bond or parent-child confidentiality (is that a thing?). I counter these points with stories about friends/acquaintances/strangers who tell me about their idiosyncratic families, who share potentially traumatic anecdotes for the first time, who are given permission and a platform to express their personal experiences and how they empathize with their own family backgrounds. And that makes it worth it -- to at least help start the conversation. 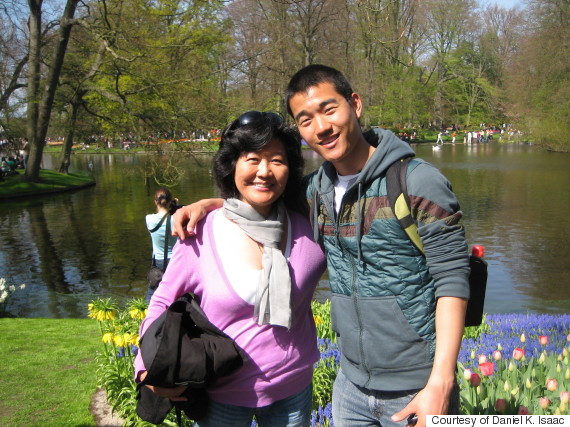 What do you think your relationship with your mom can show us about understanding and love between people who maybe don't see eye to eye?
When my mom disowned me for being gay, it was my freshman year of college. I remember going to the Financial Aid Office to consider my options as a suddenly-and-unexpectedly financially-independent 16-year-old, and they had me fill out some surprisingly simple paperwork and register for ten sessions of therapy. The therapist I was assigned ended up being the best thing to come from the Financial Aid Office -- of all places! He really helped me find a new way to approach my relationship with my mother.

He said I could be "White," "Black" or "Gray." "White" meant I could go back in the closet as my mom hoped and prayed and return to the church and fight this "sin" and have the old relationship I had with my mother. "Black” meant resuming our silence, letting the rift grow larger and learning to live without a relationship with my mother because neither of us was going to change. I was always going to be gay. She was always going to believe that homosexuality was a choice and a sin. Or I could try to find the “Gray." He highlighted the fact that my mother was a single parent and I was an only child and that our relationship, while incredibly messy, was important to each of us. And perhaps we could find a gray area in which I would accept the likelihood that she was never going to change her belief system, but I would learn to have compassion in the face of her homophobia, or ignore her ignorance, and let her words that were meant to hurt just go through one ear and out the other. Love by example, even when it may never be reciprocated in the same fashion. Am I always successful at this? No. I mean, I find a weird form of catharsis by writing about it and sharing it with the world. But I think the intention is pure. And maybe if we found the gray area in our extreme points of view a little bit more, then maybe we could have a little more understanding in the world. A little more love.

What's the one thing you want people to take away from your experience?
I think by writing #accordingtomymother, I’ve learned the importance of trying to find laughter and comedy when there’s seemingly none to be found. I think humor is part of my healing and coping process and I hope to be able to share that with these posts and with this movie. I hope that, past the hilarity and the absurdity of it all, you can see one guy’s “resilience,” which sounds like too strong a word, but basically this is how I work with the cards I’ve been dealt and maybe that can help someone else through their own journey.

Head here to visit the Kickstarter campaign for "According To My Mother."