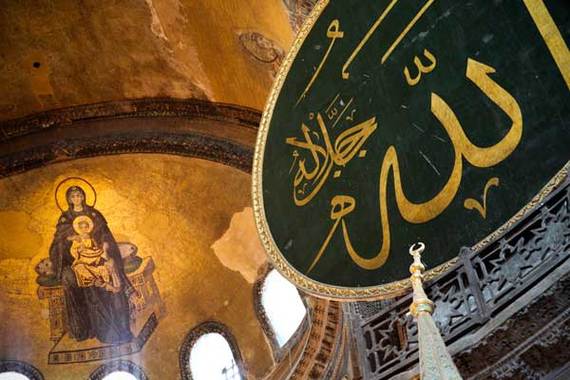 Many Christians and Jews, ignorant of what the Qur'an proposes, instead project on Islam a version of intolerance and aggression from their own religious history. In this projection, Islam must be at least as intolerant as medieval Christianity was! Now the self-proclaimed ISIS appears and confirms their worst fears.

Islamophobes, through a willful distortion of the text, ignoring the wider context, create an alternate reality feeding their own illusions. Let's consider how the voice of the Qur'an honors the key figures of Judaism and Christianity, validates the best moral values of Judaism and Christianity, and accepts religious diversity as having a positive function in the life of humanity.

When the Qur'an refers to "believers" and "unbelievers," what does it mean?
When the Qur'an was first translated into English, a Biblical vocabulary was used, but in some cases this has led to misunderstandings. The word for "believer" is "mu'min": someone who is faithful and trusts that there is a spiritual meaning to life. The word for "unbeliever" is "kafir," and it literally means to be in denial, and to be arrogant and ungrateful. These words do not refer to non-Muslims per se.

During some of the years when the Qur'an was being revealed to Muhammad, the community of Muslims was under assault by the Meccan Arabs who had driven them out of their homes and land. So the revelations that came during that time refer to the Meccans as those in denial (kafirs) and idolators (mushrikeen).

During this time, a group of Muslims found refuge with a righteous Christian King in Ethiopia -- a fact that virtually every Muslim would know. In Medina, where the Muslims had taken refuge, Muhammad also forged a treaty of mutual support with Jewish tribes living there. Therefore the kafirs (unbelievers, infidels) referred to were not Jews or Christians, but the Arabs of Mecca who were persecuting and attacking them.

What is Islam's relationship with Christianity and Judaism?

The Qur'an honors all the prophets of the Abrahamic tradition and implicitly acknowledges that prophets have been sent to all of humanity through the course of human history. In the Qur'an the Prophet of Islam is told to inform "the people of the Book" (Jews, Christians, and others with a sacred scripture): "Come to a common principle between us and you: That we worship none but God; that we associate no equals with him; that we erect not, from among ourselves, Lords and patrons other than God." (3:64)

The Qur'an makes it clear that if Jews and Christians would follow the revelations that have been given to them, namely the Torah and the Gospel, they would "indeed partake of the blessings of heaven and earth":

Regarding Judaism and its Prophets:
As we mentioned in our last article, the Divine voice that speaks in the Qur'an not only approves the truth of the Jewish Scriptures, but even claims to be the very same source of revelation: It was We who revealed the Torah; therein was guidance and light. By its standard the Jewish people have been judged by the Prophets who surrendered to God's will, as well as by the Rabbis and the doctors of Law, for to them the protection of God's book was entrusted: If any do fail to judge by what God has revealed (including the Torah), they are (no better than) unbelievers. [5:44]

Likewise, Jesus, too, is given great respect, and is even referred to as "a Word from God", and his sincere followers are described in very complementary terms. Relationships with the followers of other traditions should be characterized by more than mere tolerance, but rather by respect, compassion, peace and the fostering of coexistence and cooperation. The Qur'an instructs Muslims to show respect to the religious people of previous traditions and says: Amongst these are people devoted to learning and people who have renounced the world and are not arrogant. [5:82]

The Qur'an instructs Muslims to clearly declare that: We believe in God, and in what has been revealed to us and what was revealed to Abraham, Ishmael, Isaac, Jacob, and the Tribes, and in what was given to Moses, Jesus, and the Prophets, from their Lord: We make no distinction between one and another among them, and to God do we bow our will." [3:84]

The Qur'an calls for impartiality and fairness in relations with all human beings. It undermines any sense of religious superiority by declaring that heaven is not the exclusive domain of Muslims. It clearly states, "Verily, those who have attained to faith, as well as those who follow the Jewish faith, and the Christians, and the Sabaeans--all who believe in God and the last day and do righteous deeds, shall have their reward with their Sustainer; and no fear need they have, and neither shall they grieve." [2:62, 5:69]

In many verses, the Qur'an even asks Muslims to join in fellowship with the followers of other traditions by refraining from discussing subjects that cause division and instead put the emphasis on common themes. And do not argue with the followers of earlier revelations except in the most beautiful (or gentle) manner. [29:46] But do not revile those whom they invoke instead of God, lest they revile God out of spite, and in ignorance: for We have made the deeds of every people seem fair to them. In time, they must return to their Lord, and then He will make them understand what they have done. [6:108]

Finally, respect for all sincere human beings is enjoined upon Muslims: O you who keep the faith! When you go abroad in the way of God, be clear and circumspect and say not to anyone who offers you a greeting of peace: "You are not a believer!" [4:94]

Imam Bazargan, who resides in Hollywood, California, has offered the following statistics and examples that help to establish "a keener understanding of the respectful views of the Qur'an toward the Prophets, scriptures and the righteous followers of previous traditions":

While the Qur'an mentions Prophet Moses's name one hundred and thirty-six times, Prophet Abraham's name sixty-nine times and Prophet Jesus and Mary's names seventy times (collectively), it mentions the name of the Prophet of Islam who is the messenger of this religion only four times.

This wide spectrum of inclusiveness and the fact that the Qur'an repeatedly reminds Muslims of the noble characters in other traditions are further signs of the peaceful nature of Islam.

The third chapter of the Qur'an, Al-Imran (The family of Imran), is named in honor of the ancestral roots of Jesus Christ (Hannah, Holy Mary, Zachariah, John the Baptist etc.), however, there is no chapter in the Qur'an entitled Al-Mohammad (The family of Mohammad).

The nineteenth chapter of the Qur'an, Maryam (Mary), is named after Holy Mary but there are no chapters in the Qur'an named after Fatimah, the honorable daughter of Prophet Mohammad.

Does Islam claim a monopoly on truth or virtue?
It is quite clear from many verses of the Qur'an that righteousness, morality, and one's relationship with the Divine are not the exclusive possession of Muslims. Thus there seems to be a necessity to the diversity of religions and this diversity may help us to understand our humanity and our relationship to God.

If your Lord had so willed, He would have made mankind one community, but they continue to remain divided. [1: 118]
For each one of you [several communities] We have appointed a Law and a Way of Conduct [while the essence of religion is identical]. If God had so willed, He would have made all of you one community, but He has not done so that He may test you in what He has given you; so compete in goodness. To God shall you all return and He will tell you [the Truth] about what you have been disputing. [5: 48]

Why then do some "Islamic" governments restrict religious freedom?
The Qur'an declares in no uncertain terms: There shall be no compulsion in religion [2:256]. This assures that people should have the freedom to choose their faith and spiritual destiny. The Prophet, himself, set an example for his community with the Covenant of Medina, which detailed cooperation and mutual protection among different faith communities.

The Qur'an is, among other things, a critique of how religious truth gets distorted by human egoism, prejudice, and control systems. It offers a warning to those who overstep the bounds (including "Muslims"), oppressing humanity in the name of religion:

Say: "Have you ever considered all the means of sustenance which God has bestowed upon you from on high - and which you thereupon divide into 'things forbidden' (haram) and 'things lawful' (halal)?" Say: "Has God given you permission - or do you, perchance, attribute your own guesswork to God?" But what will they think - they who attribute their own lying inventions to God -on the Day of Resurrection? Behold, God is indeed limitless in His bounty unto men - but most of them are ungrateful. Surah Jonah 10(59-60)