In Havana, Orlando Bosch is a villain, one of the most notorious anti-Castro militants who has ever lived.

But in Miami, 230 miles away, Bosch's supporters are just as sure he's a hero, a giant among men.

These loyalists streamed into a Miami theater on Dec. 9 for the unveiling of Bosch's memoirs, entitled Los años que he vivido or The years I have lived.

Angel De Fana, a former political prisoner in Cuba, climbed onto the stage and said many people in the audience already knew Bosch. Some had even joined Bosch in the violent fight against the Cuban government.

"Almost all of us, if we haven't planted a bomb or picked up a rifle, we've done other things," De Fana said. "I went to prison for 20 years for Cuba. These are things that we thought were right at a given time. And I -- at least I -- do not renounce my past."

"Nor the present!" someone yelled as others clapped. 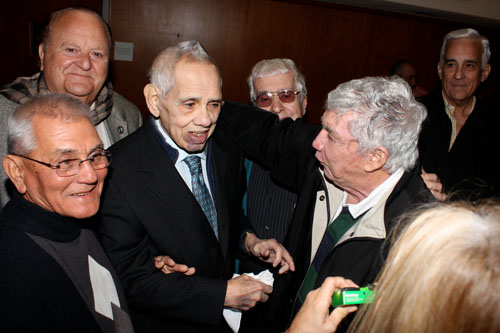 De Fana, 71, led an opposition group in Cuba and was jailed in 1962. He got out in 1983 and traveled to Venezuela. Once there, he met Bosch, then in prison on charges of planning the 1976 Cubana airline bombing that killed 73 people.

De Fana said he visited Bosch every Sunday while in Venezuela and grew to admire him.

Bosch was an "outstanding pediatrician" who could have led a "super comfortable" life, De Fana said. Instead, he risked everything and dedicated his life to "fighting for freedom." "It's impossible to know Orlando Bosch and not love him and not admire him," De Fana said.

Like many of Bosch's supporters, De Fana rejects accusations that Bosch was behind the bombing of Cubana Flight 455. "Not a single one of Orlando Bosch's acts have caused anyone's death."

Bosch didn't talk about the bombing, but writes in his memoirs:

"I have lived for many years with the stigma that I am an 'assassin' because my enemy, Fidel Castro, decided it was so. He accused me, without evidence, of being the intellectual author of the sabotage of Flight 455 and many other acts with which I had nothing to do. Only someone who has no shame and decency can accuse another one of murder when that someone is guilty of so many thousands of deaths."

The memoirs also show photos of Bosch proudly displaying weapons he helped to supply to combatants who fought Castro's soldiers in the Escambray Mountains in central Cuba.

Bosch's daughter, Lourdes, now a doctor, said her father often talked about his passion for Cuba when she was a girl.

"Never -- for years -- did I understand the love he had for Cuba. He said one day you'll understand why I do what I do."

With time, she realized he was fighting for a free homeland. And now she supports his struggle, saying, "There are few men of the caliber of my father."

Others attending included Bosch's wife, Adriana Delgado Sepulveda; his sister, Mirtha; and his daughter Myriam, nicknamed "La Chiqui," who described Bosch as "a tremendous father" who helped with his children's education even while in prison. "As a father, he's a hero to me."

Bosch was emotional and appeared to be near tears at times.

He spoke for less than five minutes, recalling his days as a student leader in Cuba and his birth in Potrerillo, a town of less than 3,000 people.

Anti-Castro militant Guillermo Novo also spoke. He said the fight to liberate "our homeland is a rosary of heroes and martyrs," and Bosch is "a giant among those heroes."

Another longtime friend, Alberto Hernandez, said Bosch "has given everything -- though not yet his life -- for his homeland." Bosch vows "he'll die on his feet and never kneel before the tyrant."

After the presentation, friends and relatives led Bosch from the stage.

An old friend, Luis Posada Carriles, 82, also accused of helping to plan the bombing Flight 455, was waiting outside. He smiled and hugged Bosch. They exchanged a few words as spectators snapped a few pictures. Then someone said it was getting late, so move aside because Bosch needed to get home.

See more about Bosch, including photos and video, at Tracey's Cuba blog, Along the Malecón.