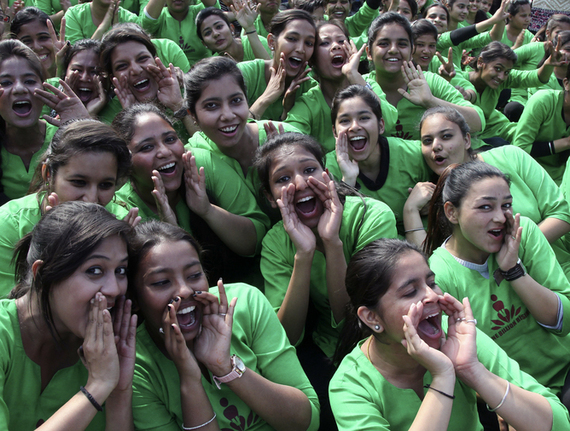 Students turn out for the 'One Billion Rising' movement, to end violence against women worldwide. Ajay Verma/Reuters

Discrimination against women and girls is a pervasive and long-running phenomenon that characterises Indian society at every level.

India's progress towards gender equality, measured by its position on rankings such as the Gender Development Index has been disappointing, despite fairly rapid rates of economic growth.

In the past decade, while Indian GDP has grown by around 6%, there has been a large decline in female labour force participation from 34% to 27%. The male-female wage gap has been stagnant at 50% (a recent survey finds a 27% gender pay gap in white-collar jobs).

Crimes against women show an upward trend, in particular brutal crimes such as rapes, dowry deaths, and honour killings. These trends are disturbing as a natural prediction would be that with growth comes education and prosperity, and a possible decline in adherence to traditional institutions and socially prescribed gender roles that hold women back.

A preference for sons

Cultural institutions in India, particularly those of patrilineality (inheritance through male descendants) and patrilocality (married couples living with or near the husband's parents), play a central role in perpetuating gender inequality and ideas about gender-appropriate behaviour.

A culturally ingrained parental preference for sons - emanating from their importance as caregivers for parents in old age - is linked to poorer consequences for daughters.

The dowry system, involving a cash or in-kind payment from the bride's family to the groom's at the time of marriage, is another institution that disempowers women. The incidence of dowry payment, which is often a substantial part of a household's income, has been steadily rising over time across all regions and socioeconomic classes.

This often results in dowry-related violence against women by their husbands and in-laws if the dowry is considered insufficient or as a way to demand more payments.

These practices create incentives for parents not to have girl children or to invest less in girls' health and education. Such parental preferences are reflected in increasingly masculine sex ratios in India. In 2011, there were 919 girls under age six per 1000 boys, despite sex determination being outlawed in India.

This reinforces the inferior status of Indian women and puts them at risk of violence in their marital households. According to the National Family and Health Survey of 2005-06, 37% of married women have been victims of physical or sexual violence perpetrated by their spouse.

There is clearly a need for policy initiatives to empower women as gender disparities in India persist even against the backdrop of economic growth.

Current literature provides pointers from policy changes that have worked so far. One unique policy experiment in village-level governance that mandated one-third representation for women in positions of local leadership has shown promising results.

Evaluations of this affirmative action policy have found that in villages led by women, the preferences of female residents are better represented, and women are more confident in reporting crimes that earlier they may have considered too stigmatising to bring to attention.

Female leaders also serve as role models and raise educational and career aspirations for adolescent girls and their parents.

Behavioural studies find that while in the short run there is backlash by men as traditional gender roles are being challenged, the negative stereotype eventually disappears. This underscores the importance of sustained affirmative action as a way to reduce gender bias.

Another policy change aimed at equalising land inheritance rights between sons and daughters has been met with a more mixed response. While on the one hand, it led to an increase in educational attainment and age at marriage for daughters, on the other hand, it increased spousal conflict leading to more domestic violence.

Improvements in labour market prospects also have the potential to empower women. An influential randomisation study found that job recruiter visits to villages to provide information to young women led to positive effects on their labour market participation and enrolment in professional training.

This also led to an increase in age at marriage and childbearing, a drop in desired number of children, and an increase in school enrolment of younger girls not exposed to the programme.

Recent initiatives on training and recruiting young women from rural areas for factory-based jobs in cities provide economic independence and social autonomy that they were unaccustomed to in their parental homes.

For India to maintain its position as a global growth leader, more concerted efforts at local and national levels, and by the private sector are needed to bring women to parity with men.

While increasing representation of women in the public spheres is important and can potentially be attained through some form of affirmative action, an attitudinal shift is essential for women to be considered as equal within their homes and in broader society.

Educating Indian children from an early age about the importance of gender equality could be a meaningful start in that direction.

This is the first of a series of articles in partnership with UNU-WIDER and EconFilms on responding to crises worldwide.