A new conversation about Thanksgiving is cropping up this year, with mainstream media outlets like MTV and The New York Times calling attention to the holiday's questionable history.

Critical people are pointing out that the story of the "pilgrims and indians" is inaccurate and, given the violence committed by the colonists against the Indigenous people of this land, deeply problematic. These critiques of Thanksgiving are an important and necessary call to tell a more accurate history of the United States and re-frame our contemporary understanding of how this country was started.

While re-teaching history is a worthy cause, it cannot be the stopping point. The problem with only talking about the oppression of Native Americans in the past is that it upholds the illusion that the struggle for justice is over.

Over the past 100 years, the federal government has by acts of Congress, Supreme Court cases and Presidential Orders done more to undermine the sovereignty of Native Nations than to restore it. Some of the most damaging federal policies came out of the 20th century, not the 19th century. Restoring tribal sovereignty to Native Nations is a process that has just begun and it is still under threat. Most Americans can give examples of what their government has done wrong against Native Americans in the past, but how many people can speak to what needs to change today?

Native Women experience sexual assault 2.5 more times than any other ethnic group. Eighty-eight percent of perpetrators of violence against Native women are non-Native. On some reservations, Native women are being murdered at a rate ten time higher than the general population. Due to a 1978 Supreme Court ruling, Native Nations cannot prosecute non-Indians who commit sexual assault, rape and murder on tribal land. As a result, very violent people are committing these crimes at alarmingly high rates and with impunity.

In 11 days, The Supreme Court of the United States will hear a case that could be the most damaging decision for the rights of Native Americans in half a century. Despite the fact that its store supervisor sexually assaulted a 13-year-old, Dollar General is fighting the survivor's family and the survivor's Tribe to avoid paying any penalty for the molestation of a minor who was interning at their store. If ruled in Dollar General's favor, this case would severely limit all American Indian Nations' ability to protect their citizen from crimes like the sexual assault this young person experienced. Sexual Assault in Indian Country is already at a crisis level and this decision could make it worse.

Out of alarm and outrage, Native women and leaders in the movement are organizing a demonstration on Dec 7th to be held during the oral arguments in Dollar General v. Mississippi Band of Choctaw Indians.

Support the struggle for Native American rights today by joining the fight to stop Dollar General's attack on tribal jurisdiction. Here is what you can do:

Attend the Rally
FORCE and NIWRC are organizing a demonstration on December 7th from 9am to 12pm in front of the Supreme Court. To make visible the devastating impact the case could have for safety of all Native Americans, over 700 stories from survivors of rape and abuse will be displayed across the street from the Supreme Court as part of the growing Monument Quilt. Register here and RSVP on facebook here.

Make a Quilt Square
Add your statement of support for tribal sovereignty or your own story of surviving sexual assault as a Native American to the growing Monument Quilt. Learn how to make a quilt square here. Quilt squares will be sewn onto shawls and worn during the Quilt Walk for Justice!

Join the Tweet Chat
The #SHAMEONDOLLARGENERAL Tweet Chat will happen on Wednesday, December 2nd from 12:00-1:00pm EST. The chat is co-sponsored by @UpsettingRape, @NIWRC and more. Join us with one of these sample tweets or write your own:

If #SCOTUS rules in Dollar General's favor, could strip tribes of their authority to citizens on tribal lands. #ShameOnDollarGeneral

.@DollarGeneral is fighting Mississippi Band of Choctaw Indians' right to protect its own citizens on tribal lands. #ShameOnDollarGeneral

More than 85% of the perpetrators of violence against Native women are non-Native. #ShameOnDollarGeneral 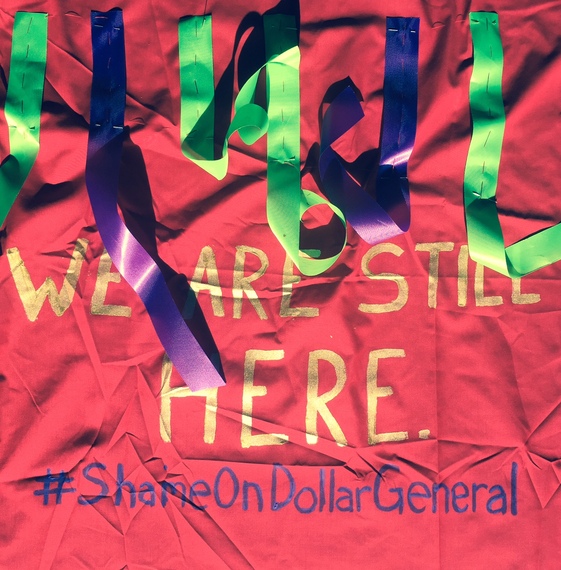