The Austin City Limits Festival 2010 came to a close last Sunday after a memorable weekend of activity and, in retrospect, a few things are certain: the weather was glorious, the talent was solid and it felt like there had never been more people packed into Zilker Park for the occasion.

A far cry from the monsoons and mud baths of 2009, there were many things that scored high points at the event this year: a roster of well-known talent like Muse, Broken Bells, the Black Keys, The National, LCD Soundsystem, and Vampire Weekend; acclaimed smaller acts to sample like Trombone Shorty, Beats Antique, and Dawes. The weather was a perfect 80ish degrees and there were hundreds of volunteers onsite continuously collecting recyclables and directing traffic. Almost all shows started exactly on time and there were a zillion Porta-Potties. This year ACL even allowed attendees to bring in water bottles and provided free stations to refill them, taking a noteworthy step in the green direction and reducing the amount of beer money necessary to spend on hydration.

Another stand out feature of the festival was the fabulous assortment of locally sourced food: new to the event, top-notch Austin restaurants like Olivia offered treats such as bacon wrapped Jalapeños, while veteran ACL favorites like Torchy's Tacos and The Mighty Cone were also there to feed the masses with tempting tacos and fried avocado creations. In all, there were 32 different vendors and between the prickly pear cactus pink lemonade, homemade ice cream sandwiches, fish and chips, chipotle chicken wraps and baskets of famous fries, there was something way beyond your average festival dog for each one of the 68,000 people.

The concerts themselves, however, were less easy to enjoy at times due to the massive crowds. Contrary to the false rumors that 10,000 additional tickets were sold for this year's festival, it was perhaps just the clear blue skies that brought out every single one of those people, amounting to an audience size that was at times unbearable. For many of the shows, it was difficult to get remotely close to the stage or hear the band in front of you without the bleeding sound from acts playing at the same time. Attendees were generally respectful and in good spirits, but overall there was less free space to roam around or relax and it sometimes felt like the shows were just the backdrop for efforts to navigate through the sea of people.

The Black Keys, for example, took the AMD main stage at 4pm Friday and although they jammed through crowd favorites like "Next Girl" and "Everlasting Light", it was as if all 52,000 people in the park at that time had come out to watch them. The struggle to see even the overhead screens of the show was discouraging and prohibited an engaging connection to the live performance. Luckily, the Keys were also slated for an aftershow at Stubbs downtown on Saturday night, which delivered the kinetic, sexy, charged rock concert that felt so diluted during the day.

On the upside, there were of course exceptions to the detached audience feel and the opportunity intrinsic to the festival set up to discover exciting new music. One of my favorite performances of the weekend was watching The National on the Honda stage just before the Eagles capped off the festival. Throughout the set they wove between tearjerkingly beautiful songs like "England" off the new album to Metal inspired screamed lyrics for "Mr. November". Front Man Matt Berninger even jumped off stage onto the low divider between the photo pit and the crowd, scampering around unpredictably with the microphone as the other eight band members on stage carried on with their trumpets, drums and guitars. The group interacted with the audience in their usual dry humor and stream of consciousness style. "I will give someone $1000 to pop that right now," Berninger joked of the gigantic white beach ball bouncing around the crowd. "Wayne (Coyne, of the Flaming Lips) is in there. He's about to throw up right now."

There were some other great moments too: Vampire Weekend delivered a standout show for the last stop on their tour as night fell on Friday, permeating the huge crowd at a smaller stage with their uplifting Paul Simon-esque sound, contagious energy and undeniably catchy tunes. The Local Natives show Saturday afternoon brought to the stage almost all of the tracks from their debut album Gorilla Manor and the trademark divine harmonies, layers of percussion and uninhibited enthusiasm that have made them a sensation at SXSW over the past two years. The always entertaining Flaming Lips made a triumphant return to ACL with the bubble boy routine and Edward Sharp & the Magnetic Zeros sounded fantastic, and brought even the chair section to its feet for their single "Home".

New discoveries from the festival included Beats Antique, a brass instrument-fortified tribal dance party spectacle, with their striking percussionist in a full body leopard cat suit, banging the marching drum and revving the crowd with world music-inspired beats. Dawes, who played at 2:20pm on Sunday, was a charming folk/rock addition to the line-up and an exhibit of the inspiration, release, passion and determination of the up and coming artist that reminded me of why we line up in the first place. Finally, I unfortunately was not able to attend on Saturday night for LCD Soundsystem or Muse, both of whom are renowned for spectacular live shows, but word on the festival grounds was they brought the house down.

Overall, there were some great moments at ACL 2010 and the weekend events made for an exhausting, fun festival time with only mild residual agoraphobia. For the event's 10th anniversary in 2011, here's hoping the food is just as good, the weather continues to cooperate and the code is cracked on how to most effectively integrate all the ACL interest with the relaxed vibe of an Austin festival. 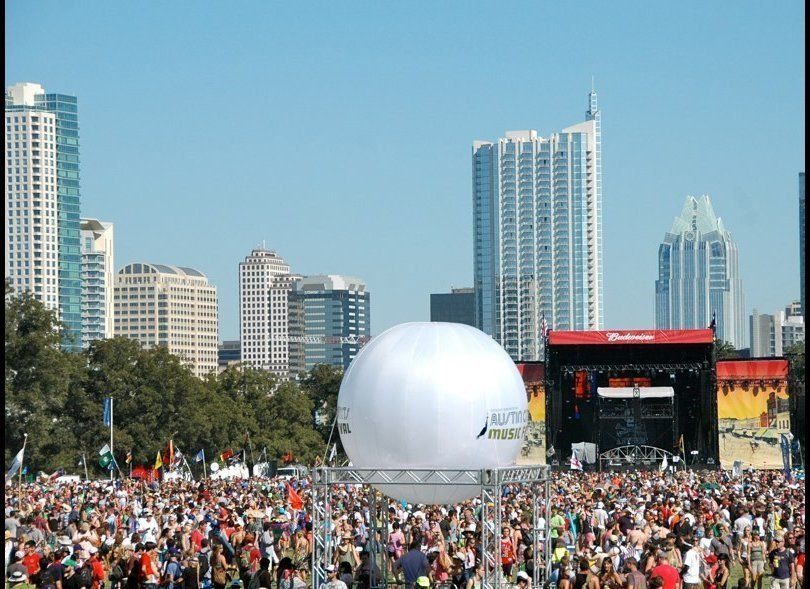