I am a survivor of the Exxon Valdez oil spill, a marine toxicologist, a commercial fisherman, and an author-turned-activist. The turning happened 26 years ago today, when I flew over the wreck of the Exxon Valdez in Prince William Sound, Alaska. The Sound -- my backyard, my fishing grounds, and most importantly, a place I loved. The giant inky stain on the water was... overwhelming. Intimidating. It was vast, and I was only one person. What could I do? As I flew over the ocean of oil, I realized I knew enough to make a difference -- did I care enough? The answer, I knew, would change my life. 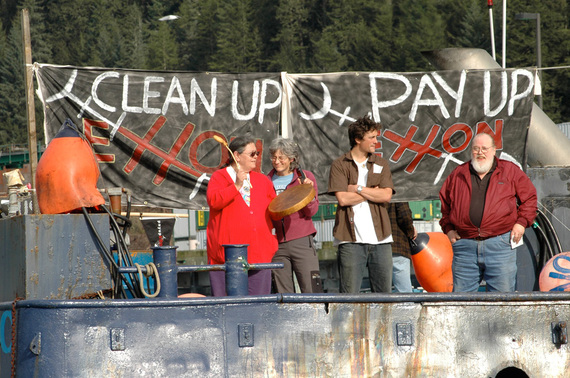 Robert Cornellier, 2006. Courtesy of Riki Ott; Cordova, Alaska. Fishermen demand Exxon pay up. Fishermen, Alaska Natives, and others fought the giant ExxonMobil in court for 20 years and lost. Plaintiffs were paid 10 cents on the dollar, causing some to file bankruptcy. Exxon's profits went from $5 billion a year in 1994, the year of the jury verdict, to $40 billion in 2008. Left to right: Patience Andersen Faulkner, Riki Ott, Robert Masolini, Ross Mullins.

That day, my love overcame my fear. I decided I would work upstream of oil spills to help transition our nation off of oil, because as long as we drill, we will spill. These days I find myself in other people's backyards: in industrialized railroad corridors where dangerous bomb trains carry explosive Bakken shale through neighborhoods and the hearts of our cities; in farm and ranch lands rocked by frack quakes and poisoned by fracking activities; along existing or proposed pipeline corridors where the steel-destroying, corrosive and abrasive tar sands oil has already spilled or most certainly will spill; and along our nation's coastlines at risk from offshore oil drilling and offshore fracking.

You see, it doesn't matter what type of oil spills or where, the impacts to people's health, lives and livelihoods, and communities are the same. People get sick and, because the health risks from these industrial petrochemical exposures are ignored or downplayed, most people do not receive adequate health care for chemical detox. Many are left with life-long debilitating illnesses. Children are especially vulnerable, very much including those still in their mother's belly. We are, after all, human, and we share the same needs for -- and rights to -- healthy water, healthy environments, healthy local economies, healthy homes, and healthy bodies. 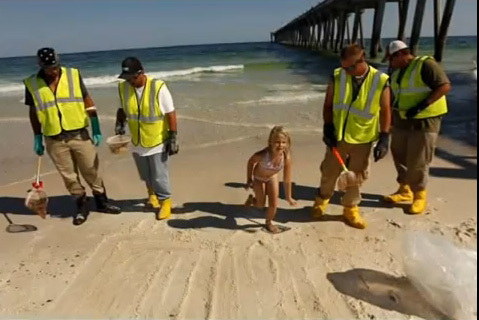 Riki Ott; June 2010. Pennsacola Beach, Florida. Beach workers told the author that they were told not to go into the water "because it was contaminated." They even taped their boots to their pants to avoid exposure. No one told the children. Beaches across the Gulf Coast remained open to visitors.

A lot of this oil that is sucked from the earth finds its way by tank trucks, railcar, pipeline, and tankers to our seaports. And here's where you come into this story. About 135 million people -- 42 percent of Americans -- live in crude oil corridors. That is, within 20 miles of coastal oil refineries, Great Lakes oil depots, and shipping routes along the Mississippi River. Millions more people vacation in these regions. Millions more care deeply about the health of our ocean and fresh waters.

Now is the time to unite our voices to protect what we love, because a small, often overlooked "something" is happening that will have a huge impact on the future of oil drilling in this nation. The Environmental Protection Agency is taking public comment on its proposed new rules governing the use of dispersants and other chemical and biological products on oil spills in U.S. waters.

This is game-changing. Or it could be, if millions of us got involved. Here's why:

Under the Clean Water Act, the president is tasked with preparing and publishing a National Contingency Plan to remove spilled oil or mitigate impacts. Specifically, the law calls for the plan to, among other things, to include a "schedule," or list, identifying products that may be used on oil spills; the waters in which such products may be used; and the quantity of product that can be used safely in such waters. The EPA is then responsible for developing a set of regulations and rules to implement the law. Some of these rules and regulations are now open for public comment.

The important part: By law, every operator of an oil facility, every shipper of oil -- whether by train, truck, tanker, or pipeline -- must have a viable contingency plan, approved by the federal and state governments. The last time EPA updated the rules was 21 years ago after the Exxon Valdez spill. The rules were created for maritime spills of conventional oil, which floats where unconventional oils sink or explode, and the testing protocols are over 30 years old. This means that 100 percent of the contingency plans are either obsolete for conventional oil or completely irrelevant for unconventional oil and gas such as tar sands oil or oil produced by the new style of hydrologic fracturing. This means, legally, we shouldn't be drilling or transporting oil. Anywhere.

What if, just what if, people started to take these contingency plans and the Clean Water Act seriously? What if we no longer allowed our government to rubber-stamp-approve contingency plans that don't work? What if we strengthened the national framework for all contingency plans, as the opportunity now presents with the EPA rulemaking, and made provisions not only for wildlife, but for human health and welfare? What if we demand that plans provide for temporary evacuation and the housing of threatened individuals, and alternative water supplies... for potentially millions of people?

The answer is: We wouldn't be drilling in the Arctic Ocean because there is no way to clean up spills by mechanical recovery, dispersants, or burning. We wouldn't be allowing subsea use of dispersants on offshore drilling rigs because dispersants neither remove oil nor mitigate harm. We wouldn't be crisscrossing the Great Lakes and our rivers with pipelines, tankers, and rail cars because there is currently no way to remove or mitigate unconventional oil impacts -- or doing so would bankrupt the spiller and the industry. In short, we would push a lot more of the risks and cost of our oil dependency back onto the oil industry, which might be forced to recognize that neither it nor the public can afford the full costs of this dangerous energy dependency.

I care about our ocean and fresh waters, our children and our future, and I know you do, too. Please take a few minutes to let EPA know you care. I'm currently spearheading public comment efforts through the ALERT Project. Please support ALERT's Top Ten Recommendations and make your comments on or before April 22. Ask your friends to do the same. Join ALERT in making the most of this opportunity to protect what we love.

Riki Ott, PhD, directs the ALERT Project, a project of Earth Island Institute. For more information about the EPA rulemaking, please visit www.alertproject.org. Comments on EPA's rulemaking must be received by April 22.