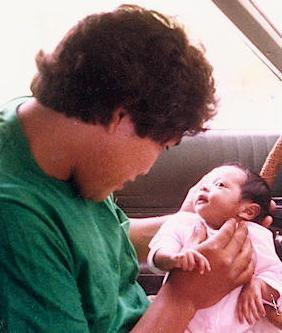 My daughter with her Hopi Indian father

I lived with the Hopi Indians on their tiny reservation for about eight years. I married a Hopi artist and we have a beautiful half-Hopi daughter who is an enrolled member of the tribe.

Even before my marriage, I was all but legally adopted by a Hopi family which included me in all of the traditional and contemporary ceremonies and events of Hopi culture selflessly. I am sure I was allowed to do things that very few other non-Indians have done--the Hopi are famously insular. With reason.

But I have never claimed to "be" Hopi.

In fact, I am incensed by the very idea of usurping someone else's culture. But while I was there, I witnessed the occasional onslaught of European "Indianists," Rainbow Children and even celebrities who had just decided that they "were" Indians because they "felt" Indian. And I came to realize that they were just modern examples of a particularly deadly strain of white arrogance.

The assumption that one can simply "become" whatever culture you want to be at will is a very dangerous thing for cultures already struggling to preserve their languages and life ways. It's a lovely idea, of course, to think that one can simply decide to be Native--or Black--because you "identify" with those people.

And let's get it out of the way right now: Dolezal is not the same as Caitlyn Jenner. Jenner grew up knowing she was a woman. Dolezal has chosen to be Black. She also chose to be white for a lawsuit against a Black college. And admitted, when shown a picture of herself at 16 on the Today Show, that she did not "identify" as black "at that time."

Gender non-conforming people do not "choose." They just...are. And they know that they are from a very early age, as a rule.

Most of the people who "switch" cultures say they're doing it out of "respect." But if they respected those cultures, they would realize that cultures are not costumes you can try on. And it is particularly arrogant and insulting for a white person to decide to just "step into" African and Native cultures. Given that the white dominant culture has been trying to erase both for centuries.

And of course, the people who actually were born into the cultures being appropriated cannot simply choose to be something else. My daughter, though half-Hopi, is identified as Black--or more often Hispanic--all the time. In fact, people even speak Spanish to her father constantly.

The world decides, whether we agree with that decision or not. Think...Tiger Woods, who took so much heat both for identifying as both Asian and Black and for his preference for blonds. Hell, think Barack Obama, whose mother was white. Imagine the uproar if he had run for office as white. Yep. There you go.

Just doesn't work in reverse. We don't have the "privilege" of simply deciding not to be Black or Native one day. And few of us would make that choice, even if we did. We've fought and died simply for the right to exist. That's part of our culture, too. Millions dead, in a battle just to be.

And that is why Dolezal's "choice" is such an insult to some. We have died for the right to be who we are.

Wishing cannot make it so.