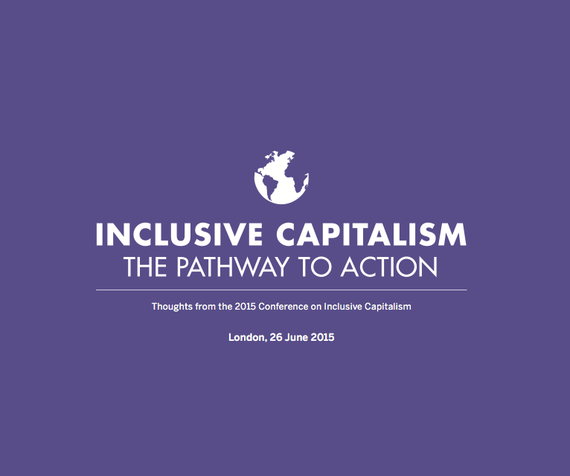 The use of the term 'inclusive' as an adjective to complement the noun 'capitalism' implies that there is something inherently 'exclusive' about a capitalist system. Presumably, the belief is that this exclusivity manifests in some of the systemic challenges that society faces today, including poverty, climate change and political violence, to name just a few. There is no question that these issues exist and imperil the future of humanity and our planet. However, it is not at all clear whether capitalism is the cause of these problems, the solution to these problems, or simply an innocent witness to the travails that humans have faced for thousands of years.

It is my strong belief that the solutions to these problems are more likely to be identified under the auspices of a capitalist system than any other political or economic system known to us today. But the very fact that so many of us are gathered here in London for this forum suggests that capitalism as we know and understand it could use a few adjustments. So what might those adjustments look like? I would humbly suggest two areas that are worthy of careful consideration, both of which get to the heart of what I think most of us would agree are the fundamental underpinnings of capitalism.

First, enterprise must re-embrace the concept of long-term investment, which has become the exception in a society where so-called investors are obsessed with short-term profitability. The performance of the enterprise is no longer measured in years, but quarters, a mindset that drives opportunism and transactional behaviour both inside and outside the organization. The reaping of shortterm profits enriches the individual but destroys long-term benefits for clients, investors and society as a whole. My firm is the only client-owned asset management company in the world, operated exclusively for the long-term benefit of our clients, and we attribute a significant amount of our success over the past 40 years to that longterm alignment between us and our client-owners.

Second, it is a misconception to assume that capitalism promises equal outcomes for all; it does not. That said, it is hard not to be troubled by the divide that exists in our society today - and that has in many ways always existed - between the haves and the have-nots. Clearly, the benefits of capitalism have not been enjoyed in equal measure by all of humanity. The challenge for capitalism in the decades ahead is to provide, as Milton Friedman, the noted economist suggested, equality of opportunity. The steady advance of the wired world is a significant step in that direction, but enterprise, governments and NGOs must collaborate to bring much broader access to education and training, to engage more people in the global economy and make equal opportunity more real.