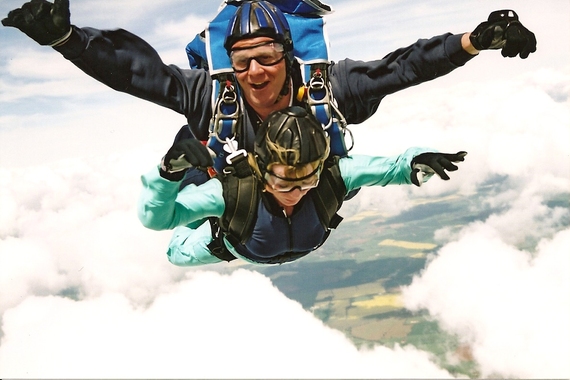 Where will you be going for your next holiday Gorilla watching in Borneo? Will you be volcano boarding in Nicaragua or even helping to crew on a tall ship? This summer many post 50s will be trying a new adventure. It appears our generation is becoming more demanding when it comes to holiday destinations. No longer satisfied with the usual haunts, or with sitting by the hotel pool, we are roaming further afield, seeking out adventures and following in the footsteps of offspring who took off in their teens.

Here's a selection of nine activities for couples and singles who fancy a holiday with a difference:

9) Combine fitness with music and feel like an extra in The Sound of Music on a yodeling trail hike in the Alps. Stop off at one of the five interactive stations where wannabe yodel-meisters press a button, blasting a song from the speakers. Then it is your turn to copy it and make the hills come alive.

8) Try a campout and experience life as a cowboy. Mustang Monument Wild Horse Eco Resort in Nevada has glamorous hand-painted tepees kitted out with four-poster beds and a 24-hour butler service. Despite the luxuries, the essence of the retreat is communing with nature and good old-fashioned adventure.

7) Experience ice blokarting in Nida, Lithuania. Imagine a small three-wheeled land yacht hurtling along beaches. Swap the wheels for blades and enjoy the sense of freedom as you glide silently over frozen lakes. Baltic Adventure provides lessons for beginners and you should be self-piloting within minutes with the wind in your hair and a whoosh of adrenaline coursing through your veins.

6) Sailing is a super activity for us older folk. It keeps us active and allows us to connect with nature. Sailing also has those quiet moments that etch themselves into our memory, where the sea and skies provide moments of pure beauty. You will gain more than a new level of fitness on this holiday.

5) Take a climbing holiday. I spoke to mountaineer Simon Yates whose expeditions for inexperienced climbers are fully booked for this year. He told me it is quite the norm for us over 50s to tackle Mount Everest and we are now seeking greater challenges.

For those who really don't want to face a sheer cliff face, consider a holiday in the Drakensberg in South Africa where there are various ascents that even a creaky old lady like me can tackle. Take a look at the Amphitheatre Slackpacking trail for those of average fitness. It can be covered in three days with overnight stopovers and no heavy bag to lug about.

4) Very pricey but guaranteed to give you a once-in-a-lifetime experience, head to Antarctica's first luxury camp and your only access to the world's final frontier -- the White Desert. Sleep next to a 200-foot icefall, walk among a colony of 6,000 emperor penguins and stand at the lowest point on earth.

This is a holiday for people with money to burn. (It costs £48,00 for an eight-day stay.) Whichaway Camp here has played host to billionaires, celebrities and Prince Harry. If you want to snuggle up with a penguin and see nature at its most incredible, make sure you book. Life is short and your kids will be fine without any inheritance.

3) Take a panoramic tour around Palermo, Sicily on a Vespa. These iconic scooters made famous in numerous films including Roman Holiday are huge fun and easy to ride. Google "Vespa tours worldwide" and you'll come up with some exciting cities including Saigon where you can be whisked about this vibrant city at night on the back of a Vespa, or hire one and drive yourself through wine growing regions in Spain.

2) Skijorking is a Norwegian word that roughly translates as ski driving or driving on skis. Skijorking originated in the Arctic and Scandinavia but its popularity has spread to other regions in the world and it is attracting an increasing number of tourists wishing to attempt this new "sport". Don a pair of skis and get towed either by dogs or horses over snowy terrain. If this is too extreme for you then stand back and watch a Skijorking championship race instead. It's fast, furious and exhilarating.

1) I had to include this choice -- zip-lining. Before I tried it out last year, I would have declared anyone who attempted it to be bonkers. However, I cannot convey the thrill one gets from flying high, attached to a wire, over canopies of trees. Indeed, I am not alone, there are people in their eighties and nineties who have enjoyed this activity. If you too want to have an unforgettable holiday try the world's most extreme zip wire at ZipFlyer in the Himalayas. It has a vertical drop of almost two thousand feet, an incline measured at a sheer fifty-six per cent, and is one of the tallest and steepest zip-slides in the world.

So, if you fancy some extreme active aging, get booked now. You'll never want to go to a hotel and sit by a pool again.