To an outsider, the first 10 minutes of every school day at Bonny Slope Elementary in Beaverton, Oregon, look like pandemonium.

Not a single kid is seated. They're all bouncing around their classroom. Music is playing dance club favorites like "Uptown Funk" and "Whip/Nae Nae."

What about the teachers? They're bopping along, too, trying to keep pace with the youngsters.

Obviously, this is all by design. Because with just 10 minutes of movement, everyone is starting the day with a mental and physical boost. By the end of each week, they've piled up 50 minutes of physical activity in an easy, fun way that costs pennies.

This jumpstart to every morning is among the many wrinkles being tested and implemented at three elementary schools in the Beaverton School District. Before we delve into their work, let me explain why their efforts are so important.

Earlier this month, the 2016 Shape of the Nation report was released, offering an overview of the status of physical education requirements in schools across the United States. The good news was that most states require schools to teach physical education. Yet that was dimmed by the bad news -- that few states set a minimum time requirement for PE and many allow students to swap it for another, less physical option or to opt out altogether.

The bottom line is that kids aren't getting the activity their bodies and brains need. How can we reverse childhood obesity if we have sedentary students? How can we raise future generations of active, healthy adults if we don't encourage them to get moving as kids? 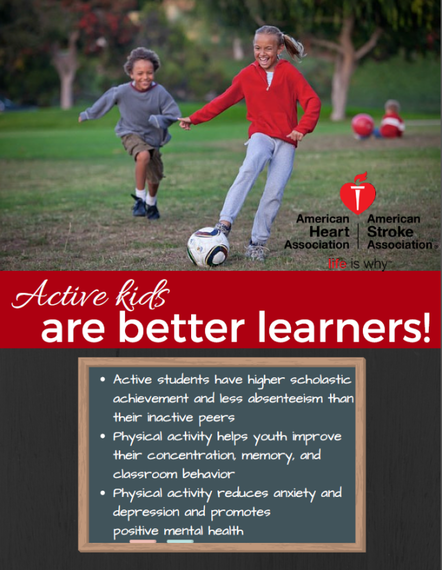 A who's who of national public health organizations -- including the Centers for Disease Control and Prevention, the Institute of Medicine and my organization, the American Heart Association -- recommend 150 minutes of physical education each week for elementary school students and 225 minutes per week for middle school.

Guess how many states require that? Only Oregon, and the law there doesn't even go into effect until the 2017-18 school year.

The law actually went on the books in 2007, giving districts an entire decade to get ready for it. With that date closing in, leaders in the Beaverton School District assembled an Active Student Task Force to find simple, smart, sustainable solutions.

"We're looking at this in two folds -- what's best for the kids and what fits the law," said Cheryl Wardell, a PE teacher at Bonny Slope and a member of the task force. 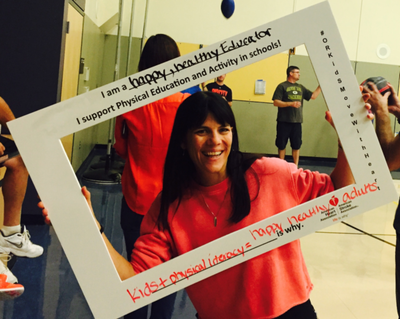 As they zeroed in on the challenge, they discovered a few obstacles, such as having enough qualified teachers. Facilities are an issue, too; a school gym can only handle so many people. And since the mandate includes no new funds, districts can't simply hire more PE teachers and build more gyms.

Perhaps the biggest obstacle is the most fundamental -- finding the free time in an already demanding schedule.

So far, the task force has come up with two creative, effective elements:

Now let's get back to that 10-minute Brain Boost at the start of each day.

The notion of a healthy start makes sense. There's also the convenience of getting this important item checked off the to-do list right away.

It turns out that a few more things snap into place quite nicely, too.

Remember the concern about a qualified teacher? State law says any certified teacher can oversee the activity. Thus, it doesn't have to be a PE teacher. The facilities worry? A classroom works just fine for these exercises. Expense? Teachers can just call up websites on a classroom computer that's already hooked up to a projector.

They aren't just Googling for the latest dance hits. There's a whole industry of online resources for this sort of thing.

There are countless options for the mid-day Brain Boosts. Through a partnership with the American Heart Association's ANCHOR Partnerships Program, the school district even brought in a specialist who gave teachers a huge array of options; one teacher who'd used the same eight techniques was thrilled to have all sorts of fun new things to try.

"Teachers can insert them whenever they want and they can last anywhere from 30 seconds to 10 minutes," Wardell said. "We know that an adult brain begins to lose focus in 20 minutes. In kids, it's more like a minute per year of age -- so a 6-year-old can go about six or seven minutes then need a break."

The tweaks can be even more subtle. For instance, one fifth-grade class changed its routine so students take a lap around the track after leaving a class where most time is spent sitting.

Another teacher changed the way students answer questions. Instead of raising their hands, they stand up.

"Just adding that alone got them popping up all day," Wardell said, laughing. "The goal is to embed movement into your day."

Wardell cites all sorts of scientific studies to support everything they've done. While it's too soon for the district to have any standardized test scores to use to evaluate the impact on academics, they have plenty of anecdotal evidence that it's improved the behavior of students. Fewer kids are getting sent to the principal's office and other forms of punishment, which teachers attribute to them expending their energy in a constructive way.

Bonny Slope, Sexton Mountain and West Tualatin View are the three elementary schools taking part in the pilot. The goal is to roll this out to all 33 schools in the district as soon as next school year. (A fourth school taking part in the pilot program is Highland Park Middle School. They have a 12-minute physical activity break before lunch and do Brain Boosts during health class, in addition to holding PE daily.)

Wardell will soon be working with all 52 PE teachers in the district, with the intention of each of them rolling it out across their campuses. She knows it's going to be a long, slow process but she also believes the efforts of her team -- a group of PE and classroom teachers -- will pay off.

"We're creating a culture of movement," Wardell said. "And to create a culture, it takes 10 years. Really, none of this is new knowledge. Thirty years ago I had a professor in a community college health class who had us run before we took a test. It always helped. We think we know what's best for the kid but we get so nitty-gritty into the weeds that we forget what it's like to be kids."

The American Heart Association's ANCHOR Partnerships Program is funded under the CDC's National Implementation and Dissemination for Chronic Disease Prevention initiative. The content does not necessarily represent the views of the CDC.