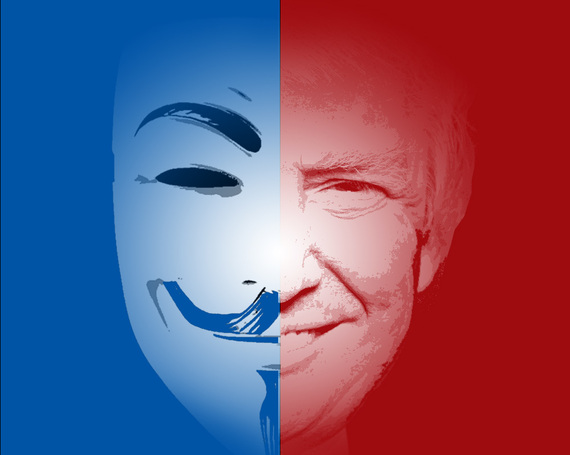 Something incredible has happened in the short time between Occupy Wall Street and #BlackLivesMatter. While the Occupy movement was mocked for their ukulele playing and library-lending programs, the latter are being lauded as heroes for interrupting politicians and challenging authority.

In 2016, activism is finally cool again. For the Millennial generation who are coming of age in this election cycle, taking to the streets in protest for something you believe strongly in, is somewhat becoming a right of passage. Make no mistake, there is an all-out civil war being fought for the soul of America. It's South Carolina versus New York all over again. Except this is a war fought not with state's armies, but with tweets about "states rights." To paraphrase Lincoln, now we are engaged in a great, albeit "cold," civil war.

Today, young black women are being thrown out of political rallies by white supremacists, and journalists are being "choke-slammed" by Secret Service agents. It's easy to see the parallels to the darker days of American history. For further proof that we have traveled back in time, even the O.J. Simpson murder trial is back in the news cycle.

Racial and societal tensions in this country are nothing new. While the battle between the North and the South, of Blue States and Red States has been present for generations, we've never seen a level of demonization quite like this. With no clear existential military threat to this nation's survival, Americans are using psychological warfare to create enemies within our own borders. Ask anyone the question, "Who is likely to destroy America?" and the answer you receive will be a subset of Americans themselves. Depending on who you ask, perhaps its liberals or Republicans or Muslim-Americans. America is consumed by an "us versus them" mentality, where the "us" in the equation is defined less by what you are for than what you are against.

It's within this context that we are seeing a massive resurgence of activism, led by the enthusiasm of Millennials. The only thing more honorable than attending a Trump or Bernie rally, joining arm in arm with those that share your values, is to be the lone antagonist intent on trolling the other side. Unfurling a banner, or shouting at Hillary Clinton or Ted Cruz is no longer seen as obnoxious, but heroic.

While the polarization of America has reached a fever pitch with this election cycle, I believe the origins of this "Cold Civil War" date back to 2009. The collapse of the American economy, the election of the nation's first African-American President, coupled with increased social media adoption has created a "perfect storm" for hate and divisive rhetoric to fester. In 2009, when Congressman Joe Wilson shouted "You Lie!" at President Obama during an address to Congress, it was met with gasps from half of the country, and cheers from the other. There is sadly very little middle ground, with the loudest voices not only being heard, but being retweeted.

We may never see Trump build his wall along the Mexican border, but we are heading towards walls being built between Red States and Blue States. And we're all going to pay for it.