Over a decade before widespread toxic mortgages led to the worst national housing crisis in history, artist Rick Lowe was addressing the issue of affordable housing through art with Project Row Houses, a neighborhood-based nonprofit art and cultural organization located in Houston's largely African-American Third Ward. The project was born in 1993, when Lowe acquired a block of elongated "shotgun shacks" slated for demolition and sought to enhance the historical and architectural richness of the neighborhood through an arts-based revitalization. Simultaneously, Lowe began developing practical solutions for much-needed low-income housing. Since that time, Project Row Houses has grown, with the help of Lowe's longtime collaborator Debra Grottfield, to include several dozen homes, a library, a multimedia center, an art gallery, and a residential program for young mothers, which provides low-income women between the ages of 18 and 26 with affordable housing, childcare, and workshops in self-management. I met up with Rick Lowe at the Creative Time offices on October 8th to discuss Project Row Houses and the role of art in community activism for Artists on the News. Below are experts from our conversation.

Gregory Sholette: Tell me about the initial phase of Project Row Houses, especially what it was like to confront this forlorn block of shotgun houses that you then brought back from the brink of ruin?

Rick Lowe: [In Houston's Third Ward], neighborhood after neighborhood, you see blight and it's hard to imagine what the possibilities of a place could be. It was through [the paintings of] artist John Biggers that I was able to look beneath the surface of these dilapidated houses and find the richness in their history—both in architecture and in relation to African Americans. I became very hopeful once I saw the possibility of breathing life into them, something John Biggers has spent so much time trying to get people to understand and see in his canvases.

GS: What happens when an artist actually gets assigned to one of the buildings?

RL: When we first started out, artists volunteered with the clean-up process. Before we knew it, we realized that we had to create an artistic presence within this project because [otherwise] the community would not understand us as anything different than a potential slumlord. So immediately we had artists begin to do things on the windows and create installations of little portraits. We called it the "Drive-By Exhibition," as a reference to the shotgun architecture, but also the drive-by shootings of the early 1990s. The community trusted us in that situation. We were saying, "Let's trust artists; let's give them a small stipend, a key to one of the houses, and access through our community network."

GS: You have mentioned that there's a story about community that you felt was important, and that developers would never really consider.

RL: For developers, it's about short-term gain. They want to put in as little as possible and take out as much as possible right up front. From my perspective, as an artist that's interested in housing, it's about the possibility of long-term value that housing would produce in a community. It goes beyond the bricks and sticks that one might put up... to renovate a house or build a new house. How many layers can you put in this building that add meaning? Instead of taking a 100 or 200 square foot porch and squishing it down to just a little stoop, we [took into account] a history of families sitting on a porch while talking to people across the street.

GS: The cost of extending the porch in the long run actually provides another kind of value?

RL: Oh, absolutely. The people that live in Project Row Houses are connected to a story that elevates their life.

GS: How many people live there now?

RL: We have nearly fifty units of houses and there are families that live there.

GS: It seems there is a narrative in Project Row Houses involving autonomous forms of organizing and production, from those that reach back to the era of Reconstruction and the great migration north, all the way to informal self-organization amongst slaves in the South. Are you also educating people about their collective capacity to self-organize and become self-sufficient outside of the mainstream economy?

RL: We started to shift the dynamics of the economic structures around the community. There are a lot of people making a lot of money building houses, and they're gonna be making a lot of money building houses right around us if we don't figure out some way of dealing with that. So we decided to reap the benefits of developing and after a couple of years of studying and planning, we put together a new community development corporation and started buying land and building houses. At this point, we've built thirty-eight units of newly constructed houses with an additional twenty-eight that we're planning. It's giving us the opportunity to do some things that can control our economic destiny even though, because we're pushing to keep the rents low, it's not like a huge moneymaking thing for us. But it's giving us... control over property, land in that neighborhood, and determining how that place grows economically in the future. And it breaks up that concentration of poverty. That is important.

GS: Going back to John Biggers, the artist who inspired you... when I look at his work, I see many depictions of forceful African American women gardening, cooking, serving as anchors within the community. I'm wondering if you could speak a little bit about the importance of women, not only to the project symbolically, but also literally as a force of productivity and creativity?

RL: When you look at [Biggers'] paintings, most of the women have very large hands, and it's a sense of power that Biggers embraced because black women had to carry the black American race through one of the most difficult periods that anybody's ever had. Men were not allowed to do many of the things that women had to stand up to do.

RL: Well, I mean if the owner of the sharecropping structure comes to visit, it's almost better that the women talk to him because an [African American] man cannot speak man-to-man to a White man. A woman had to take that role. Biggers understood the burden of black woman as mother, worker, and a person that had to carry the heavy weight of the community. You mentioned Debbie Grottfield, who worked with me in the early stages. She began having conversations with young folks around the high school that was nearby and the thing that popped up was that there were single mothers falling to the bottom, burdened with children at a very early age, and giving up on their educational goals. It's almost like flipping around John Biggers thing, you know -- instead of being this power[ful] force, all of a sudden women are the most vulnerable. So it's interesting that we ended up focusing on that as our first housing effort around single mothers. And you know, watching the women in that program and just seeing how they operate, the things they deal with, I completely understand Biggers' perspective and understand the capacity of women to deal with that. It's been amazing to see some of these women come into the program completely dejected, with low self-esteem and no possibilities of going anywhere, and by giving them just a little bit of structure how powerful they've come to be.

GS: What's been the single biggest obstacle to overcome and did it come from the city, from the community, from artists, or from all of those?

RL: (LAUGHTER) I've started to realize that those obstacles are great teaching moments and moments of opportunity for all kinds of things to happen. I've learned that you immediately have to start trying to learn from them and make them positive or use them in some way.

GS: Given all that you've learned, and are still learning, about these processes, have you ever thought about actually doing something specifically in the realm of policy, perhaps in Washington?

RL: No. That's not me. I find my true sensibilities as an artist. And my way of working has always been one that's very intuitive and responsive to things. I'm not a big planner but I've set certain things in motion that create opportunities for planned things to happen. For someone like me—it took me a long time to understand this, though—in many cases you can get much more done outside than inside the system. I enjoy being on the outside, and being able to create situations that force politicians to respond.

GS: So where do you go from here? What's next?

RL: I am interested in exploring the boundaries of my creativity in ways that can impact the world in social, political, physical, and environmental ways. And I have to keep trying to allow myself the courage to do it, you know, because as we open ourselves up and look around, there are many opportunities to invest that creativity. But it's also challenging. Oftentimes, as an artist, you're trespassing into different zones. For instance, I began to work on a project recently in Korea, working with small businesses. But what do I know about small business? I know nothing. I have to force myself and find courage to trespass into that world, to explore it, to figure out how to apply myself in that situation. So to me it's just... an exciting time to be an artist, because it's all wide open. Artists can license themselves to explore in any way imaginable. The challenge is having the courage to carry it through.

Gregory Sholette is an artist, writer, activist, academic, educator, and is a consultant working with Creative Time on Artists on the News, a new initiative that brings artists' voices into contemporary journalism. 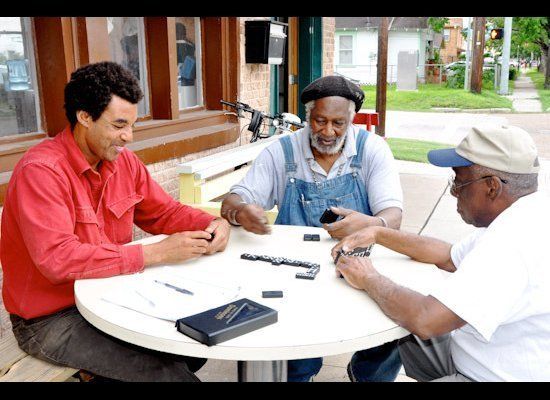