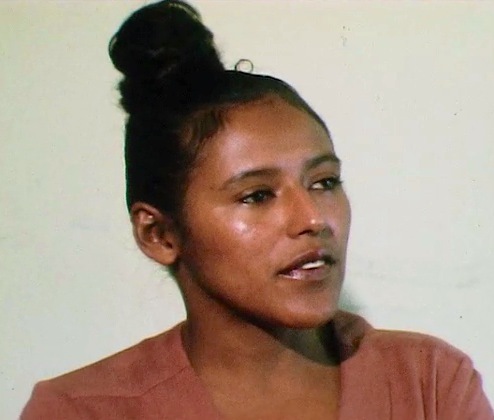 "I have all the guns and all the money. I can withstand any challenge within and without." Elaine Brown commanded the delegates of the Black Panther Party in 1966 at the Oakland Auditorium as the first woman to lead as chairwoman. In her memoirs A Taste of Power she chronicles her journey from aspiring singer and classically trained pianist to activist. While living in Los Angeles pursuing her singing and songwriting career, a chance encounter at a house party began her conscious-raising. After the assassination of Martin Luther King, Elaine became a member of the Black Panther Party headquarters in Los Angeles and helped the party set up its first Free Breakfast for Children, Free Busing to Prisons Program and Free Legal Aid Program.

After his release from prison she became the lover and comrade of co-founder Huey P. Newton and rose through the ranks. 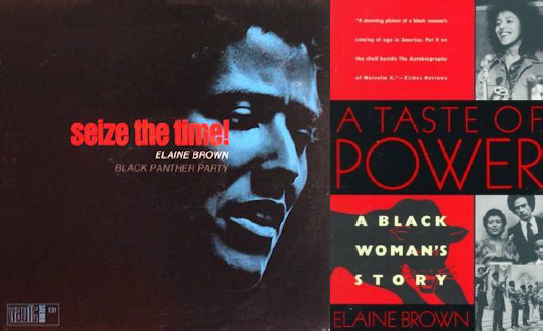 Along the way, she recorded her own civil rights compositions in albums, Seize The Time and Until We Are Free, and performed at party fundraisers and George Jackson's funeral. Elaine took center stage and became a member of the Central Committee and replaced Eldridge Cleaver as Minister of Information. She also published a party newspaper. 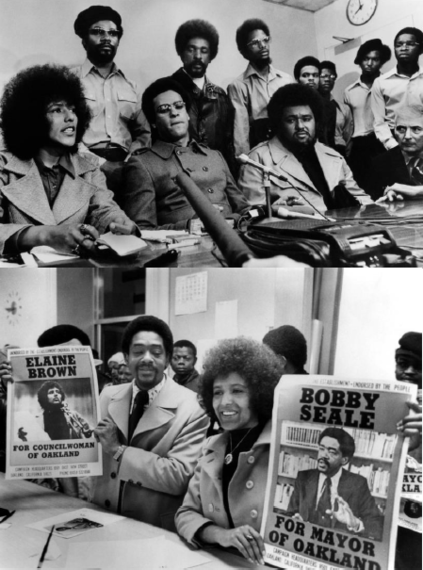 When Newton was charged with murder and fled to Cuba, she became the leader from 1974-1977. As Chairwoman Elaine led the party through its most expansive period, she secured government funding for the Panther's Liberation School and a ran for a city council seat in Oakland. Upon Huey's return from Cuba, she left the party due to a final disagreements and the sexist environment.

After a sojourn in Paris, she returned to America. Today, she is an author, speaker and activist. Elaine is politically active as ever. After running for president under the 2008 Green Party ticket to bring awareness to the issues of the underserved and attract minority voters, she is not seeking political office, but remains a strong advocate for self empowerment. She says:

I am entrenched in developing a massive project in West Oakland, as CEO of the non-profit Oakland & the World Enterprises. Our primary goal is to provide a self-determinative means of survival and enrichment to formerly incarcerated people and others facing monumental barriers to employment and economic survival, through launching a series of businesses for them, to be cooperatively owned, housed in a complex that includes affordable housing.

If we find the money to make this project successful, and I have every reason to believe we will, we will have created a concrete model for wealth-building and economic development for the marginalized masses.

She authored The Condemnation of Little B. Elaine continues:

I am now working mostly with formerly incarcerated people, toward addressing recidivism. When I lived in Atlanta, I co-founded and worked for years with two prisoner rights' organizations, Mothers Advocating Juvenile Justice and the National Alliance for Radical Prison Reform. Both organizations fell under the weight of the government's neoliberal agenda and activity.

Presently, as Executive Director of the Michael Lewis Legal Defense Committee, I am focused on the case of Michael Lewis, known as "Little B," subject of my last, published book, The Condemnation of Little B. Michael was arrested, in Atlanta, at 13 years old and convicted as an adult for a murder he did not commit. He was sentenced to life and sent to an adult prison at 14 years old. He remains incarcerated after 18 years. I am doing everything I can to free him. 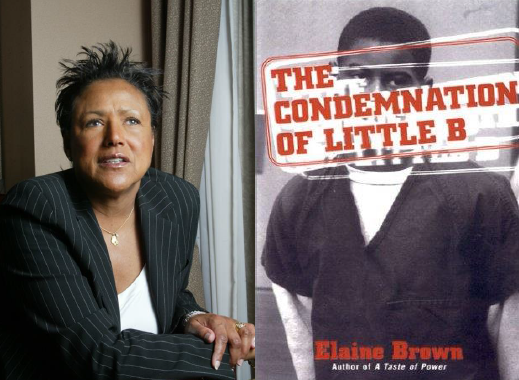 Elaine is hip to the culture around the history of the party. Recently, she attended a private screening of the Sundance 2015 documentary Vanguard of the Revolution and shares:

In his film The Black Panthers: Vanguard of the Revolution, black documentary filmmaker Stanley Nelson slices and dices the history of the Black Panther Party into a two-dimensional palliative for white people and Negroes who are comfortable in America's oppressive status quo.

She has hopes for the HBO film based on her memoir:

Though my memoir has become incorporated into an HBO prospective miniseries The Black Panthers, to be written and directed by Carl Franklin, I would love to convince Carl to ask either Janelle Monae or Alicia Keys to play me. They both remind me of me, if that's not too self-aggrandizing.

Singing and speaking at Occupy Wall Street and Occupy Oakland rallies, she is a welcome voice. Alondra Nelson's book Body and Soul chronicles the Party's struggle for quality medical care. Elaine has her say on Obamacare:

I consider Barack Obama to be President of the United States. In that, he is maintaining the status quo, as indicated by his first significant act, the "bailing out" of large, crooked financial institutions -- particularly those on Wall Street, notably named for the wall built by enslaved Africans in 1653 to protect the Dutch colonists from "Indian raids" and site of New York's lucrative African slave trade. I deem Obama's Affordable Care Act to be in keeping with the long-established government program to finance big corporations, in this case, insurance companies and health care providers.

This particular scheme mostly burdens the working poor with yet another bill, albeit the benefits it may provide some needy people. No human being should be denied medical care on account of money, including insurance payments. Healthcare is a human right recognized in most civilized countries.

Elaine has keen observations on the recent campaigns against police brutality:

For most of my adult life, I have been an advocate for black liberation and human rights. The righteous outrage recently exhibited throughout the country over new examples of long-standing police brutality and murder of black people is welcome to me. Whether or not a social movement or organization will arise from all of this to righteously challenge it remains to be seen.

Rebel-heart Elaine Brown, then and now.