This year, my thirty-something kids aren't all that interested in getting the usual shirts, sweaters and jewelry that I love to shop for in the weeks between Thanksgiving and Christmas.

Instead, to my surprise, topping their wish lists this year were requests for what I'm calling patriotic holiday gifts -- donations in their honor to organizations like the ACLU and the Southern Poverty Law Center. More than wooly sweaters and tasteful bling, they want to support causes that will keep our country -- their country -- on an even keel during the stormy Trump years ahead.

In addition to donations to groups like the ACLU, they have asked for subscriptions to news media doing solid investigative journalism like the New York Times and the Washington Post. (They already get HuffPo.)

I don't know how many Millennials would describe themselves as patriotic. It's an old-fashioned word that, for many, suggests a closed mind, nationalism and my country, 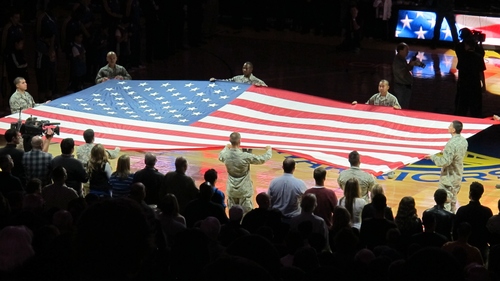 At a Warriors game in blue state California. Photos by Barbara Newhall


right or wrong. For me, patriotism means being stubbornly loyal to the American project and the ideals it's been striving toward since the constitution was signed in 1787.

I believe in self-government, the rule of law, justice, equal opportunity, civil liberties and public education. I believe in keeping those spacious skies spacious and those purple mountain majesties purple. I believe in freedom of speech, religion and the press. I think that makes me patriotic, so right here, right now, I'm claiming the term patriot for me and mine.

I hope you will join me in giving friends and family the gift of a United States of America that's good to go for another 227 years.

Here's my list of patriotic holiday gifts. It includes charities, businesses and political action groups. Some contributions are tax deductible, some not. All will make great patriotic gifts for the progressives on your holiday list who are troubled at the prospect of an incoming president who intends to (or might accidentally) throw a monkey wrench into the 229-year-old American experiment.
Keeping the Media Healthy and Journalism Real

The New York Times -- Support investigative journalism. Give an online subscription, or maybe the Sunday Times home delivered.
The Washington Post -- Give a subscription. Take serious journalism seriously.
Local Newspapers -- Consider giving home delivery or an online subscription to an area newspaper -- think local.
HuffingtonPost.com -- Send friends a link to sign up for a subscription (this costs you nothing!). Recommend that they get email updates for verticals you love, but they might not know about.
National Public Radio -- I go to NPR to remind myself of what civil discourse sounds like.
Public Broadcasting Service -- Masterpiece, of course. But also the PBS NewsHour, for reliable news Monday through Friday.
The Newseum -- The interactive museum in Washington, D.C., defends the First Amendment's five freedoms: religion, speech, press, assembly and petition.
The Religion News Foundation -- advancing religious literacy with programs for religion journalists and the public. A hot and often misunderstood topic these days.
The Wayback Machine -- The Internet Archive is a non-profit library aiming to preserve online data and "give everyone free and universal access to all knowledge, forever." According to MSNBC news commentator Rachel Maddow, the Wayback has captured posts by bad actors who've tried to expunge their incriminating sites.
More Patriotic Holiday Gifts -- Just for Starters

More about the worrisome political climate facing America at "Why I've Decided to Stop Bad-Mouthing Donald Trump." And, on the light side, a lesson in circuitous rhetoric from a preschooler at "The (Two-Year-Old) Rhetorician at Our House." 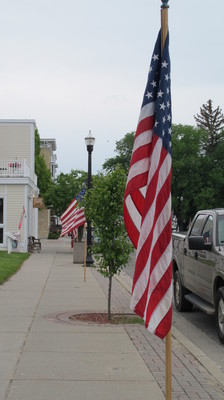 Fourth of July in Michigan.