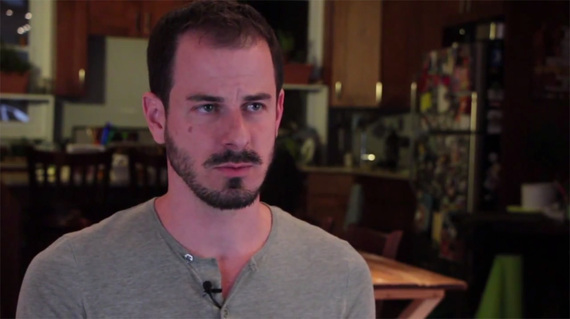 Alan Bounville walked 6,000 miles for gender-identity and sexual-orientation equality. But what happened early on in his walk, at a small grocery store in a rural town, is what led him to one of his most memorable experiences. Alan recalls how it began:

It was actually the customer who asked first. ... [A]s I'm pulling up to the register, he's like, "'Full Equality Now'? What's that mean?"

I said, "I'm walking for gender-identity and gender-expression and sexual-orientation equality."

One of them said, "Well, you came to the right place."

The customer was referring to Joey Harris, a young queer teen who had recently died by suicide after being bullied in school and in the community. Alan was told where the father works, and after they met, a special relationship began between Alan and Joey's family, including a vigil at the teen's grave:

Right towards the end of the vigil, after I said a few words, all of a sudden this flurry of fireworks goes off, and you just hear, "Boom-boom-boom-boom-boom-boom-boom-boom!" in the background. And we all just kind of looked at each other, and we were all kind of crying a little bit, and Joey's mom Sabina says something like, "That couldn't have been more perfect timing, because Fourth of July was Joey's favorite holiday."

Joey's parents ended up giving Alan a necklace that belonged to Joey. After saying goodbye, Alan continued on his walk, set up his tent a few miles down the road, and reflected:

[I]t got really dark. I set up my tent in this big grass patch and just kind of tamped the grass down, put the tent up and then got inside it, put all my stuff inside. But I was so tired, so I just laid among the curves of the grass, and I held onto the necklace and just kind of cried myself to sleep.