Two activists who have been on the front lines of the battle against Wall Street's predatory practices confronted two of the world's wealthiest and most powerful financial titans -- BlackRock CEO Laurence Fink and PIMCO founder William Gross -- on Tuesday, pressuring them to discuss their corporations' attack on the working class families of Richmond, CA who are trying to salvage their lives and their homes from the disaster of foreclosure. The activists were calling on BlackRock and PIMCO to negotiate the sale of troubled loans to the city of Richmond, so that the loans can be fixed and foreclosures can be avoided. 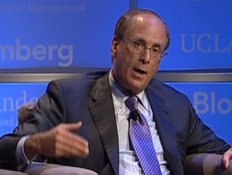 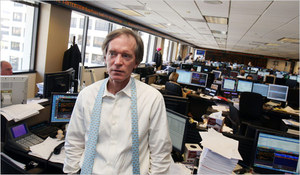 The problems facing working class homeowners in blue-collar Richmond may be hard for either money moguls to understand.

BlackRock's Fink has homes in Manhattan and Vail, Colorado as well as a 26-acre country estate in North Salem, New York, 50 miles from his New York City office. He owns a private Gulfstream G-550 jet. Last year, according to Forbes, he earned $75.8 million, making him the highest paid financial services CEO in the country. BlackRock is the world's largest money managed with $3.6 trillion in assets.

PIMCO's Gross, who heads the world's largest bond fund with about $250 billion under management, has a personal net worth of $2.2 billion. He is the 252nd wealthiest person in the country, according to Forbes. PIMCO is based in Newport Beach, CA and Gross lives in a beachfront home in nearby Laguna Beach. He made about $200 million in 2011, according to the New York Times.

Forbes magazine ranks Fink #42 on its list of the "world's most powerful people." Gross ranks #51.

Although the two plutocrats live in the economic and social stratosphere, Peggy Mears (a leader of the Alliance of Californians for Community Empowerment) and Jono Shaffer (an organizer with the Service Employees International Union) tried to educate Fink and Gross about the everyday lives of people who live month-to-month on working class incomes. They confronted the two financiers during a talk they were giving at the Beverly Hilton Hotel sponsored by the UCLA Anderson School of Management and distributed flyers to the upscale crowd.

Speaking from the audience before the official question-and-answer segment began, Shaffer asked Fink and Gross to explain why their firms are suing the City of Richmond, which is trying to help "underwater" homeowners by purchasing their over-priced mortgages and selling them back to them for the current fair market value.

"Why are you suing the city of Richmond instead of negotiating?" asked Shaffer, who can be heard on the CNBC video speaking over the hisses of audience members. "Your day of reckoning is coming!"

PIMCO and Blackrock backed a lawsuit recently filed against the City of Richmond, California by Wells Fargo and Deutsche after that city, hard-hit by foreclosures and with half of all homeowners still underwater, sent a letter to the investors and servicers offering to buy 624 underwater mortgages held by private-label security trusts. The city program is designed to help the homeowners by acquiring over-priced mortgages at their current value. The city will then reduce the loan balance and refinance those mortgages so that borrowers would end up paying significantly less every month.

The lawsuit challenges the city's plan to use its power of eminent domain, if it proves necessary, as the only way to acquire and fix the mortgages if the banks and investors are unwilling to negotiate the sale of these loans. U.S. District Court Judge Charles Breyer dismissed the investors' lawsuit, explaining that the City has not officially exercised its eminent domain power, but the money managers and banks intend to continue the ligitation after Richmond proceeds with the plan.

Richmond city officials, as well as local residents and groups like ACCE and SEIU, want PIMCO and BlackRock to agree to sell the mortgages rather than litigate the issue, but so far neither financial giant has expressed a willingness to negotiate. Activists around the country as well as the financial industry are looking closely at Richmond as a test case of the eminent domain strategy. If Richmond is successful, many other cities are likely to adopt this approach. Nationwide, about 10 million homeowners are drowning under the weight of underwater mortgages.

Many economists agree that modifying their mortgages to current market value -- called "principal reduction" -- would not only prevent millions of foreclosures but also help improve the overall economy. But Wall Street banks have been unwilling to modify mortgages for most underwater homeowners and neither the Obama administration nor Congress have been willing to mandate that the banks do so, even though America's biggest banks received $125 billion in taxpayer bail-out funds. So Richmond decided to take matters into its own hands with its bold plan to rescue homeowners

The battle in Richmond led Shaffer and Mears to the tony confines of the Beverly Hilton Hotel, where UCLA had invited its business school graduates and faculty to hear from two of its wealthiest and most powerful alums.

After Shaffer rose from the audience to ask his question, CNBC camera caught Gross and Fink looking into the audience trying to figure out what's going on. "Should I answer?" Gross asked Sullivan. "If you'd like to," Sullivan responded. [The confrontation occurs at 32:15 in the video]

Sullivan tried to redeem Gross by reminding him that his father was a shoe salesman and he may have grown up in a "union household" -- as though his allegedly blue-collar roots would make him more sympathetic to Richmond's struggling homeowners.

Gross -- who said he grew up in a once-heavily union town in Ohio but whose father wasn't a union member -- then explained that PIMCO's and BlackRock's lawsuit against Richmond was a challenge to the city's effort to use its eminent domain authority to seize mortgages rather than property. "We can disagree, but I appreciate the question," Gross said, pointing to the protesters, who had already by escorted out of the room by UCLA security staff. Underwater homeowner Mears was escorted out of the room shouting "negotiate, don't litigate."

That led moderator Sullivan to observe that there's considerable "anger at Wall Street" these days and to ask Fink and Gross, "How do we fix that? How do we make people trust the system?"

Unwittingly using the language of the Occupy Wall Street movement, Gross acknowleged the ongoing tension between "Wall Street versus Main Street" and between "the 1 percent versus the 99 percent."

"Main Street needs a fair share, too," Gross said. "Wages have gone down while corporate profits" are growing. "When you strip Main Street of the ability to earn a fair wage then you have an imbalanced economy that doesn't work very well."

Fink disagreed with Gross. He objected to the idea of restoring Glass-Steagell. But he acknowledged that "there's a lot of pain" in the country. "We're leaving a lot of people behind," citing "wage compression" and widespread foreclosures. "If we don't address these issues, we're going to have a greater 'have' and "have-not' society."

Despite these sentiments, Fink said he opposed Richmond's attempt to use eminent domain to seize mortgages and help struggling homeowners. He said that PIMCO's and Blackrock's lawsuit was to protect "our investors' rights." He said using eminent domain to take land to build freeways and urban renewal projects like tearing down the Chavez Ravine neighborhood in LA in the 1950s to build Dodger Stadium was appropriate because it was "for the better of the whole than the few."

Richmond city officials and community activists believe that the city's plan also benefits the entire community, not just the homeowners who will get significant relief from the burden of underwater mortgages. In Richmond, home prices have plummeted by 58 percent since 2007. Thousands of homeowners have already lost their homes. Nearly half of remaining homeowners are underwater. The city has lost millions in property tax revenues, leading to cuts to vital services and infrastructure repair. Nationwide there are many cities like Richmond.

Although housing prices are rising in areas like Laguna Beach, Vail, and Manhattan, the economic "recovery" has bypassed places like Richmond.

"We'd like to invite Larry Fink and Bill Gross to Richmond to see for themselves," said Mears. "They might learn something they didn't learn about at UCLA's business school."

Peter Dreier teaches Politics and chairs the Urban & Environmental Policy Department at Occidental College. His books include Place Matters: Metropolitics for the 21st Century, The Next Los Angeles: The Struggle for a Livable City, and, mostly recently, The 100 Greatest Americans of the 20th Century: A Social Justice Hall of Fame (Nation Books, 2012)