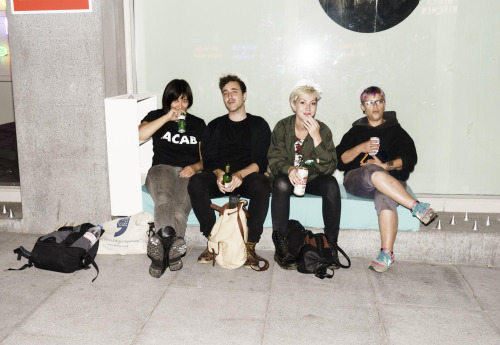 In just one of many examples of why the world is a cold, ugly place, “anti-homeless spikes” have materialized in London. The barbed strips, the most extreme example of London’s “hostile architecture," urban designs meant to deter people from using them for anything but the intended purpose, were installed with the intention of preventing homeless people from sleeping there.

Naturally, anyone with a heart has not responded well to the medieval designs: a supermarket removed them last year following protests, while a residential building removed them after a petition was signed by more than 130,000 supporters.

Recently, a group of activists teamed up to install a bed over one of the spikes in London’s Curtain Road area. The group, referred to as “Space, Not Spikes,” according to its Tumblr page, goes by the motto “Turning travesties of urban design into hospitable spaces.”

The bed they installed is a cozy, welcoming shade of blue, and looks much less terrifying than the series of metal spikes that previously inhabited the space. Even better: the group also installed a bookshelf directly next to the bed, in what they refer to as the “Curtain Road Public Library.” Check out a full list of the titles here.

One of the artists involved in the project, Leah Borromeo, spoke with The Independent about the reason behind the initiative: “Regardless of whether you own, rent or even have a home, the streets are ours.”

It's not news that the dangerous sleep habits of homeless men and women are frequently ignored; but these spikes are a violent reminder of that fact. We’re glad to know this group is doing at least something to take the edge off the experience.