As many as one hundred Southern California conservationists and animal rights activists are expected to stage a protest march on Saturday, May 7, to demand adequate protections for a seal colony in La Jolla, California's Casa Cove. Their march through downtown La Jolla, CA, will begin at the corner of Girard Ave. & Prospect St. in La Jolla and end with a rally above the beach at Casa Cove. (map)

Casa Cove, also known as "baby beach" by locals, has served as a rookery for harbor seals since the construction of an artificial sea wall by the Scripps family in the 1930s. Carly Slawson, a volunteer with APRL's SealWatch, says:

"Due to development and human intrusions on the coast the nearest established rookeries for harbor seals are roughly 100 miles to the north and south of Casa Cove thus limiting the harbor seal's ability to breed, nurse, and raise their young." 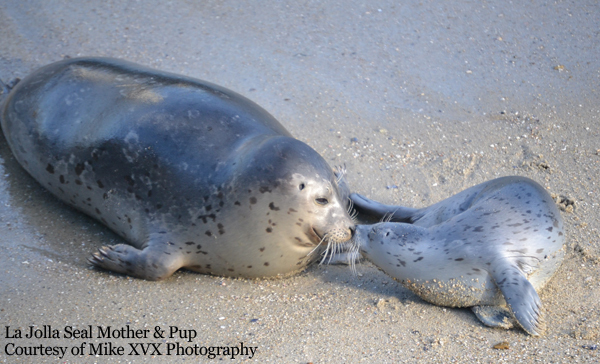 "Must we humans be so selfish that we would deny the seals a small spot on the coast they can call their own. Those who want the seals removed so children can have the beach have certainly not asked the children what they want. Most children would prefer to see seals living happy on a beach than to see them removed. The people who are victimizing these seals are both anti-nature and anti-children. They have their own agenda of greed and prejudice," says Captain Paul Watson, founder of the Sea Shepherd Conservation Society and star of the hit TV show Whale Wars.

"Despite federally mandated protections for these seals, periods of shared use of the beaches at Casa Cove have led to situations where seals were harassed or chased away by people," says Dorota Valli of the Animal Protection and Rescue League (APRL) of San Diego's SealWatch.

The activists are an umbrella group of organizations including the Animal Protection and Rescue League of San Diego, Seal Watch San Diego, La Jolla Friends of the Seals, and Orange County People for Animals, who are collectively fighting to establish protection, and an eventual sanctuary, for the La Jolla seals.

The activists have implemented a two-tiered approach of nonviolent direct action protests, like the one they have planed for Saturday, as well as a plan of civil action in the La Jolla courts. The activists have recently petitioned the courts for a Temporary Restraining Order (TRO) in hopes the rope barring access to Casa Cove will not be lifted and that the Baby Beach rookery will not be opened to beach goers. The case is being revisited in La Jolla court on May 13th, 2011.