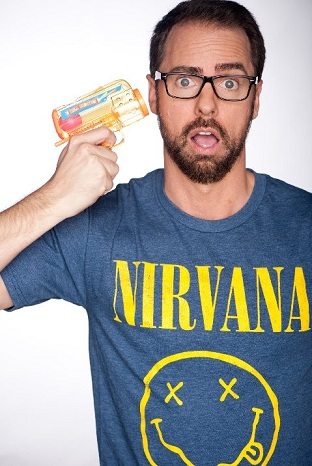 David Banks is known for his comedic performances in over 100 commercials, however this chameleon has been breaking out and taking on darker roles. Currently he's celebrating theatrical release of CUT! which he co-wrote and starred in. Twitter: @Dynamitedork

David Banks is an actor, writer and full-time dork. I had no trouble whatsoever coming up with questions for David after seeing his commercial reel . I mean, really, just look at him. I couldn't figure out if I was laughing AT him or because of him!

I tried to come up with a word to call David that would actually hurt his feelings, but I couldn't think of one. If you think of such a word, post it on his Twitter account and let's see what happens.

So you really think you're funny? Yawn.

Well my mother tells me this usually during the holidays when I show up wearing my jolly Christmas sweater bearing gallons of egg nog! Darnit did you have to yawn? Don't you know that's contagious? [LAUGHS]

Did anyone ever teach you how to work your left dimple?

I have tried to have a sit down talk with the left side of my face about the mini cave on the right side but he isn't a very good listener. That was actually a lawn dart accident when I was a child. Thank goodness I won that match.

What was your very first commercial job? Which commercial over your career stands out the most to you and why?

My first commercial job was actually Coors Light, with no free samples unfortunately. It was directed by David Fincher which was a real treat! He was literally blasting Ozzy Osbourne between takes, and at that very moment I knew I had picked the right career choice! I'm actually being serious for once right now. I'm pretty big on signs and a rather fun unexpected event happened. My dad Tom Banks worked at Foote, Cone & Belding, aka FCB for many years in advertising and when he passed away I really wanted to follow in his footsteps, or at least in front of the camera. When I found out that the Coors Light I had just booked was through FCB I nearly fell off my chair! I really feel that was my dad in his own comedic way telling me everything will be okay. YOU MADE THE RIGHT CHOICE. It was the first commercial I landed after about four years of rejections.

Usually pancakes, my second cup of coffee and witty banter with friends. Although lately I must admit that a good old fashioned Chevy Chase movie pretty much does the trick. No matter what sort of day you are having how can you feel lazy, lethargic or lacking motivation after a classic Vacation movie? Am I happy they are making a new Vacation movie?? I'm actually skipping through my house this very minute.

Oh, let's talk about CUT! which you co-wrote and starred in. What possessed you to do this film? Give us the gory details. What's it like making the festival rounds? What did you learn about being on the other side of the camera?

Well 'possessed' might be a nice choice of words given the fact it's a horror/thriller. My writing partner David Rountree and I were in talks with a major studio to get our comedy off the ground, and decided while we wait for that we would dive into something we both LOVE LOVE LOVE! Horror with a thriller twist. Something along the lines of SAW meets SEVEN. It was an absolute dream project! It did better than we could have imagined. After submitting to a few film festivals and winning awards we looked at each other and said did this really just happen??? We wanted to make something absolutely shocking with a ton of twists and turns. I mean so many turns you feel like you are driving through the grand canyon blindfolded with your worst enemy! Those kind of turns LAUGHS It was one of the best things I have ever done in my career. To jump on that side of the camera really gave me a whole new respect for directors, producers and anyone involved in the creative aspect. It blew my mind! and taught me more than I ever could have dreamed.

I would say talking with my mouth full. For some reason I always come up with what I think are brilliant ideas when I have a mouth full of food and feel the need to share them with everyone around me at the time! It's a pretty bad habit. The most disgusting habit I have seen? Hmmmm living in Los Angeles, can I pick 12 of them?

I'm kidding. I would say driving with your feet out the window. I'm not sure why people think that's ever ok. It might be ok for my dogs head, but never a pair of dirty bare feet.

When and at what age did you realize you're a dork?

Most children's first words are usually 'dada', 'mama' or even 'food'. Mine was DORK. I embraced it at an early age. [LAUGHS]

Actually I was never the cool kid and wearing glasses and being nicknamed dork which is pretty hip and trendy now, got you a one way ticket to the loser's lounge as a child, HA HA !

I have always admired actors that were able to hone in on their dork skills (Dax Sheppard, Sam Rockwell, Zach Galifianakis) It's a pretty amazing thing. The world needs more dorks.

Respond to this: "Whatever."

I have always been a Whatever kind of guy.
Whatever I don't do today I try and squeeze it on my list for some time this month.
Whatever people tell me to do, I usually end up doing the opposite.
Whatever advice I hear in regards to no more energy drinks and coffee I usually ignore.
Whatever sort of tough day you may be having, usually pizza can fix it. If they are out of pizza, biscuits and gravy also do the trick.

But seriously, Whatever happens today is a gift and Whatever my mother and her husband tell me to do I always listen. Family knows best.

Think back several years. I must know what it was like working with Steven Bauer in Doing Hard Time.

He is just one of those guys who is like a machine! I really admire actors like him and Bruce Davison that I have been privileged to work with. They really set the bar for me. They love what they do and it shows.

I love talking about projects that stick with me even after the shoot is finished. The ones that really leave an amazing memory with you. I just wrapped a film called Goetia with some very gifted actors - Devin Goodsell, Mark Furze, Bobby T and Margaret Judson from HBO's Newsroom. It's about two young couples who head to a small town to fix up and resell a condemned house they recently purchased. Emily and her fiancé Jesse have recently endured the burden of taking care of her disabled younger brother, Zach. After only a short time being at the house Zach's long term disabilities start to disappear, but are replaced by something sinister and evil which sets off a chain of events leaving the five new residents fighting to survive.