Codebreaker, a 2011 docudrama originally broadcast in the U.K. as Britain's Greatest Codebreaker, was a mind-bending entry in the recent Frameline37 film festival at the Castro Theatre in San Francisco. Directed by Clare Beavan, the film explores the life of genius British mathematician Alan Turing and the circumstances leading to his suicide in 1954. Codebreaker is the story of a man whose vision and whose reason to be bettered the human experience for all time. It is also the story of a man who was systematically ruined by his own country.

Universally regarded as the father of computer science, the creator of artificial intelligence -- the concept of "computer programming" begins with Alan Turing. In 1939, Alan was recruited to Bletchley Park, the location of the U.K.'s Government Code and Cypher School. His mission was to crack the secret codes of the Nazi regime. The codes were organized in their "Enigma Machine" which, according to a statement by Tony Sale of the National Museum of Computing, could be arranged in fifteen million-million ways. "The German operator keyed the message in," he says, "scrambled it, then sent the scrambled text to the intended recipient with a machine set with exactly the same settings -- and that de-scrambled the message and revealed the plain text." But the code used by the German Navy -- and, specifically, to communicate with its u-boats destroying British supply ships -- was complicated by even more layers of cipher. Turing cracked through this enabled code and with his colleague, Gordon Welchman designed the machine that deciphered the Nazi's incessant communications. It was called, "The Bombe".

Alan Turing was a gay man. And, yes, the machine's name was a derivation of "bomba kryptologiczna", a lesser decryption device that came out of Poland. Still, calling it "The Bombe" does give it a certain polish. En français, bombe can be used as slang to describe someone who is a "knockout" or "fox". Without this device, D-Day would not have happened when it did. The Bombe guaranteed the Allied victory. Turing's biographer, David Leavitt says, "Alan Turing's contribution cannot be overstated." 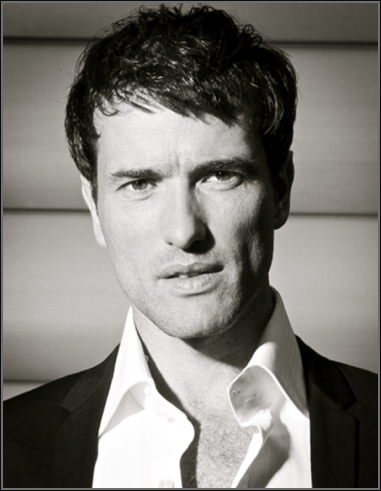 Director Clare Beavan (America: The Story of Us; Simon Schama's Power of Art) chose actor Ed Stoppard to portray Alan Turing. Ed is familiar to American audiences from such roles as "Sir Hallam Holland" in the recent chapters of Upstairs Downstairs; as "Bridey" in Brideshead Revisited (2008), and "Henryk" in Roman Polanski's The Pianist.

"The film deals with what he experienced in that last year and a half of his life," said Stoppard during our recent interview, "including the astonishing great leaps forward he was responsible for in the realm of computing, natural sciences, and mathematics. I was aware that he is relatively anonymous. If people do know anything about Turing, they'll just say, 'He's the guy that cracked the Enigma Code.' I think some people's attitudes toward even that achievement are kind-of blasé and a bit flippant. In some respects, how could it be otherwise? Unless you are a mathematician, a codebreaker or interested in cryptology, you would not appreciate what that achievement involved and what it meant. It was a fascinating subject, a detailed look at Turing's life, and long overdue."

Mr. Stoppard is very camera-friendly. Alan Turing is a very complicated character. Among Ed's theatrical credits is the very long and quintessentially complicated role of Shakespeare's Hamlet. Between September 2005 and April 2006, Ed traveled with the English Touring Theatre -- engaging many audiences in the enormity of his character's question of whether to end his life or not. As Alan Turing, he engages the question again -- but with only one witness, a psychiatrist. Distinguished actor Henry Goodman portrays the only other role in the film, Dr. Franz Greenbaum.

The dramatic aspect, the script of Codebreaker, consists of a series of sessions between Turing and Greenbaum. Their exchanges are intertwined with the documentary stream of Nic Stacey which illuminates the historical details, Alan's mathematical genius, and the nature of the bond he developed with fellow student Christopher Morcom, whose untimely death rallied him on toward the creation of what would become the first programmable computer.

"I cared about what I was in his eyes," says Alan to Dr. Greenbaum. "Moreso, in a sense, than what I was in my own. In some ways, he was an even steadier companion after his death. I didn't want to frighten anyone, but I knew he was still there."

Google's Director of Privacy for Product and Engineering, Dr. Alma Whitten says, "The things that he contributed to computer science weren't things that happened to be true in one particular year in one particular decade. They are the things that are fundamentally true. So, they're always going to be with us -- in the same way that the things Galileo and Newton contributed to physics are always going to be with us."

Can a machine think? "Why can't something of a person remain alive?" Alan asks. He is clear with Greenbaum that he does not believe an individual consciousness, like Christopher Morcom's, can be transplanted into a machine. At least, not yet. "But, can we not house something like a human consciousness inside an inorganic vessel? Something permanent, so it will remain and achieve something like wisdom? A wisdom to which you and I can refer?"

Alan's wisdom vessel would not "Be" nor replace his adolescent friend. But it would show Christopher that his living had not been in vain. It would be something that would never die.

"I think what Turing was saying," said Stoppard, "was that Christopher Morcom had been a profound inspiration on him. He wasn't trying to re-create him as a sort-of cyborg, a cybernetic organism. Although, having said that, Turing was a pioneer of Artificial Intelligence. That was another string to his bow. But I don't think he was trying to bring Christopher back to life through a machine. He was wondering if it was possible for a machine to contain the essence of a human being and how that might be achieved. Throughout his entire life Turing wanted to achieve work that he felt Christopher would be proud of. But I don't think he was trying to bring him back from the dead. I don't think he thought that was possible, like keeping a brain alive in a jar and that that would be Morcom."

Docudrama is the perfect genre for this story. I asked Ed if his scenes with Greenbaum were filmed sequentially. Was his train of thought similar to that of a stage experience?

"A few weeks before we started filming, I met with the director and producer and talked about what we were trying to achieve. I read what I could about Alan. Surprisingly, there isn't a lot of source material. There is one principal biography. But we had a great script to work with. That makes my job a helluva lot easier. It was fairly chronological. The script read like a play. We were able to cover a lot of ground relatively quickly and efficiently. It's quite a privilege as an actor, when you're filming, to be able to get a good run at your storytelling. In the modern age, we're used to having scenes end after a page and a half. So, to have a longer exchange was a real treat."

Codebreaker is also the story of a man who stepped outside the British Codes -- the laws concerning homosexuality. The man who had helped to save his country was in turn brutally destroyed by it. Alan's chance encounter with a younger man led to a brief period of sexual exchanges which then led to Alan being robbed. His grandfather's watch was stolen and Alan wanted it back. A report to the police prompted questioning as to why the man was in Alan's home in the first place and what was going on while he was there. Alan was then charged and convicted of gross indecency. He was given the choice of being imprisoned or to undergo "organo therapy", that being the forced intake of Stilboestrol. Estrogen. Chemical castration, administered at the Royal Infirmary. The hormones would do more than simply reduce his libido. His punishment was that he be feminized.

"Do you know what their poison did to me?" Alan asks Greenbaum. "It shrunk my testicles. I grew breasts. We all worked to break Hitler. He sterilized Jews like you. We fought that bastard. We defeated him. And when we were finished, what did they do to me? And I'm supposed to allow it?" 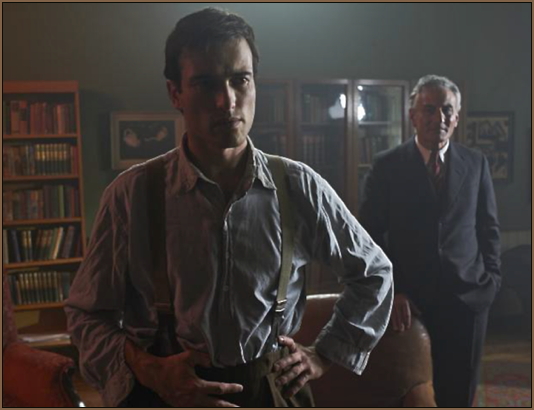 "It was pretty shocking," said Stoppard, "when I learned that Turing was offered this ultimatum between serving a custodial sentence or undergoing this treatment of estrogen to cure him of his homosexuality. But the pervading attitude towards homosexuality at that time was known to me. So, the attitude of the authorities didn't surprise me. It was the course of action that was surprising. One of the moving aspects of the story is that Alan was very guileless. It was his naiveté that led him into this terrible predicament and this confrontation with Authority and the Law. It makes it all the more shocking that this man who had, with only small exaggeration, not only beaten the Nazis but who had also essentially invented computing should be treated in this way."

Come April 1953, Alan's sentence was finished. The talk was that, once the estrogen injections stopped, what were described as its "side effects" would disappear and his testosterone levels return to normal. But, how long would that take? No one was sure. For some victims of this punishment, the regeneration of their natural testosterone never happened. The lack of it screws-up the brain. Alan would never be able to resume his former level of work because he was now regarded as a complete security risk, a public disgrace. Alan had lost all respect for his country. He realized he was expendable. The United States would not allow him in. The myth of the homosexual traitor began to take hold. "The pervert is easy prey to the blackmailer," claimed Senator Joe McCarthy. Alan fell into deep despair. He ended his life on June 7, 1954 with a dose of cyanide.

"When I'm working, when I'm portraying a character," said Stoppard, "whether it's a real character or a fictitious character -- I try to keep the ball in the air for the duration of the performance, whether that's three hours on the stage or a ninety second take. For me, it's about trying to maintain a truthful stream of consciousness within my mind, that is truthful to the character. One of the reasons I said I wanted to play Turing is because I find him as a person very interesting and I find his work very fascinating even though the vast majority of it is way over my head. I have a kind of affinity with mathematics and I can appreciate the beauty of mathematics. I was able, relatively painlessly, to empathize with Turing and to allow the pleasure he took in his work to also resonate with me. So, when he's describing the work he does and anything concerning his research, even though on some level it leaves me behind intellectually, I can still tap into the effect it has emotionally. The role was enormously enjoyable and I thought Clare made a fantastic film. I will certainly look back on it with a great deal of pride."