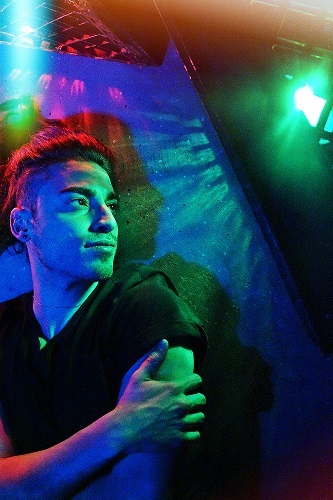 Jade Hassoune likes to express himself with may different artforms. Talking to Jade is very comforting. It gave me a positive outlook that there are still some decent people in the world.

Tell us about your audition for Shadowhunters.

It was a nice and special audition process. Sometimes things just flow and fit. I had been auditioning fa lot that year, I was starting to wonder what I could do to keep the passion and the expectation alive. The Shadowhunters audition came way at the end of pilot season, even past it. I had gone to my friend's cottage for the weekend close to Montreal and I got a last minute call from my agent, to audition for the role of Alaric. The audition was in Toronto, but all I could do was send a tape and I had to do it fast. I didn't realize it at the time how big the Mortal Instruments was, all I knew that day was that the scene took place at a police station. Out of all the auditions that year, this one I felt the least confident about. But I sent it. I was surprised a week later when I was called in for a different character, vampire Raphael Santiago. This time I was in Toronto, by that point I had started researching about the show and the Mortal Instruments world. It wasn't hard to find info about it since the Mortal Instruments book series has such an established international fandom and success. Things got more exciting when I realized what world I was slowly entering. There was already so much buzz about the other cast members and anticipation from the fandom. Luckily there were a lot of drawings of the characters online, lots to read and even a movie to watch. A week later I got a call to read for Meliorn, and then a call back a few days later to make some adjustments for the producers and director. And I was gifted with a great friend of mine being my reader so I was able to connect instantly. The whole process was a month, and at the end of that month there was an announcement for my casting and a week later I was on set and I had joined an epic world. Luckily I said no to a job that would've had my hair buzzed cut that month. I had a feeling to keep my long hair. And now I know why.

You're into the comic book scene.

Reading comics / graphic novels are such a great way to tell and to delve into a story. It feels like a movie but with more of your imagination because you get to play the soundtrack in your head, and you have control of the rhythm to a certain extent, time somehow warps because you can linger and focus on any moment for as long as you want. Or create faster momentum.

I've been drawing and creating comics since I was a toddler and recently, because I had the time to finally make it "legit", I got my Cartooning Certificate at a college in Toronto. I have some collaborations with other actors and writers I've met on sets, some they've written and I've illustrated. I'm working on other projects of my own as well, everything is in development, but I'm looking forward to it all. Won't release anything until I feel ready to tackle that world. I'm still observing the scene. Some of my favorite graphic novels /comics are "Habibi" and "Blankets" by Craig Thompson, the "Shutter" comic series, The Walking Dead, and I'm still following Buffy The Vampire Slayer as comics continuing the television story, it's season 10 now! I grew up with Tintin and Garfield.

Why did your family move from Lebanon to Canada?

My parents left Lebanon because of the war. They wanted a better life for my brother and me. They have an epic story and journey that one day I will turn into a screenplay. Before moving to Canada, we were in Geneva, Switzerland where I have my first memories, when I was four and a half we arrived in Montreal.

What type of music do you listen to?

My music taste is very eclectic. I find things I like in all kinds of music. Depends what state of being I'm in. I do listen to a lot of pop and hiphop music though. I'm a child of the pop culture and I love to see how it's evolving. But I'll listen to classical or meditation music or EDM or Jason Mraz. I'll go to many concerts, huge stars or locals or in-between. My favorite concert was seeing the Cat Empire in Montreal. The energy and connectivity of everyone in the room was incredible. Such a great time. For anyone who knows them, imagine how crazy the Wine Song must be live. And their improvising skills were genius. I like discovering new music, and I love my Canadians doing such a great job in the industry, Drake, Wknd, Bieber, Grimes, and recent discoveries Allie X and IRIS. I love when musicians reach beyond the music industry like Lady Gaga. I also go to a lot of underground DJ events and art parties and find new music through there too.

I was shooting something one day, and I missed the rehearsal for the Shadowhunters fight choreography, so I had to learn it the morning of the shoot. Luckily we have a super stunt coordinator, Steve Lucescu, and his team is full of talented super humans, so they all teamed up to teach me in an hour. I had all day to rehearse it. The Demon suit takes hours to put on. And we shot it on two separate days for a few hours. Can't wait to see what it looks like. It's in Episode 10 "The World Inverted". It was a lot of fun to shoot that with Dom.

Tell us about 'That's My DJ'. How did you get involved?

I went from being a fan of Season 1 to being in the middle of it all. The creator / director Kristin Waterson and I met because we were on a similar paths. One day I joined her monthly party 'Homebrew' as the artist for the pen&ink cartoon posters for each event and as somewhat of a promoter. After about a year of friendship / collaboration she offered me the acting job. We created an indiegogo campaign to shoot Seasons 2 and 3. We raised $16,000, which was over our goal, in four weeks. That in itself was such a rewarding learning experience. It's my first time being involved so deeply in a project's creation. I think Season 3 is the best work I've done yet; very proud of it. Like the British television show Skins, That's My DJ follows a new character each season. So I have the pleasure to play Sam who we follow in Season 3. He is present in Season 2 as well, being very close to the main character of Season 2, which should be out somewhere in early summer! Season 3 will come a few months to a year after that. That's My DJ is about young professionals in the music and party industry who work in a recording studio and create a party called Homebrew. That's My DJ could be described as: Skins meets Shameless all wrapped up in one electronic music blanket!

Am I a sex symbol?! Hahahah. That's very nice of you. Um... I never thought about this. That is a giant compliment. I hope it's fun for everybody. I will try to continually embody who I am and grow everyday and if it makes me a sex symbol then great! I hope I can also inspire and have conversations and explorations that expand awareness.

I'm glad to be here. I'm glad to be learning more and more every year. And I'm glad to have conversations with more people like this. I'm still looking for charities or causes to be involved with. If your message is to empower and uplift humanity then I'd love to hear more. But for now what I can do is treat the others directly around me with equal respect knowing we are all brilliant beings with the potential for well-being and thriving in a collective way. Check out the Dream Loud Official campaign that I just collaborated with. They raise awareness to save the art and music programs that are being removed from schools. I think it's a vital part to stay sane in school.