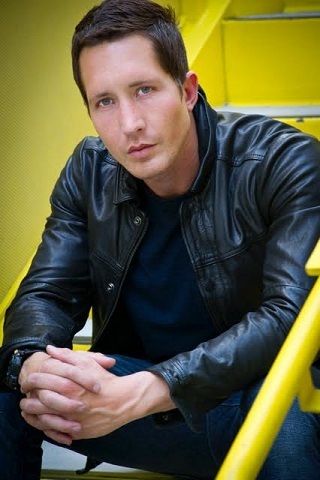 Alien Outpost, Chicago P.D. - all in a day's work for actor Joe Reegan.

Joe Reegan is a funny guy. He's been doing lots of serious acting roles lately, but in person he throws in some funny things that will pass over your head if you're not paying attention. Joe's a good looking guy so I can definitely see how it would be easy to drift off into lala land and not hear a word he's saying.

So I asked him some serious, and some not so serious questions. Let's check out Joe Reegan's answers!

Why are you an actor?

I think people are BORN being actors. I think actors are a "species" unto ourselves. As a little kid I knew that's what I was going to do with my life. I was lucky enough to be exposed to theatre growing up, and I knew I wanted to be on the stage, not sitting in the seat watching the stage.

What type of role would you turn DOWN? Why?

It's challenging to come up with a hypothetical role I would turn down. I'm most happy going to work, being on set and collaborating with people.

How long ago did you complete #AlienOutpost?

We wrapped principal photography about a year and a ½ ago, and since then, Jabbar Rasaini and the entire team have been working on the VFX and all the other cool stuff that goes into finishing a great movie.

What was the most difficult scene you did and why?

The entire shoot was awesome. Probably one of the best times I've had in my entire life. Every day of the shoot was incredibly difficult. Explosions and live gunfire require a huge amount of choreography from the actors and director. Hands down most difficult scene involved an explosion that had taken 3 days to set up. On an indie budget, you get 1 take to get it right with that large of an explosion. So there was an obvious amount of pressure to nail the scene, from the dialogue, choreography, and avoiding being blown up. Jabbar let me know this was a one-take opportunity, and in the end, the added pressure to get the shot, only enhanced the pressure my character was under.

Have you ever taken a role that turned out to be the exact opposite of what you expected?

No. With film, in my experience, you audition quite a bit for the role. So you meet the director, casting director, producers, etc., you have the script, you've been given the opportunity to ingest the character and the world, so you know what you are getting into.

I have had some very unexpected environments working in TV. Network TV moves quickly and I have been thrown into some "challenging work situations". Personalities don't always click. But in the end, it's not personal, so you do your best work and move on.

What's it like being involved at Sundance? Do you pay your own way?

Sundance is great and insane. I am very grateful for the films I have had there. Tons of huge parties, great movies, and also one of the best times to ski. Every time I am there I try to get at least one day in on the slopes, because the slopes are empty. Everyone is on Main Street doing panels, interviews and seeing films.

Every time I have been I have had to, yes, pay my way. Pack in on good old Southwest and fly up there and find a place to crash. You do your interviews and pics and embrace the chaos!

I didn't know how serious being "verified" was, or even what the point of Twitter was, up until a few years ago. Now I'm into it. It's a great way to interact with people who follow your work and to show support for other actors/films and causes/organizations that you are passionate about. Great for news on the go as well.

A few years ago I was working on a show with a heavy teen audience, and I started getting massive amounts of notifications of new followers. Then my account got hacked and tweets were sent out about something "random", I don't remember what. So I emailed "THE TWITTER", and they emailed me back and fixed the security issue, and I got a blue check-mark by my name and #verified. I'm down with #twitter. I don't know if the bird is a boy or girl, but very nice, nonetheless.

In my book, fans are fans. Any time someone writes or tweets about something I have been a part of, or stops me on the street, I feel very grateful. When anyone appreciates your work, it is always humbling.

What types of music are your favorites?

My musical tastes are all over the map. One day I'll be listening to E-40, the next day, The Rolling Stones. My environment dictates the music I listen to. At home, it has to be something mellow, (RadioHead), in the car on the way to an audition, its anything I know the words to, so I can get out of my head and warm up my voice.

If you could date any musician, singer, who would it be, and why?

I plan on marrying Rihanna. I think we would make beautiful children.

What's your workout and food routine?

I am compulsive about working out. It centers me for the day. I wake up, brush my teeth and immediately start my workout. It's a combo of lifting, cycling and trail running. It's a moving meditation for me.
Food wise, I eat pretty much meat, vegetables and fruit.

On Christmas Day I ate a 2 lb box of See's candy, so I'm not perfect with my diet. My favorite soda is Diet Dr. Pepper and I would drink a six pack of it every day if I could.

What was the best and worst audition you ever had? Why?

Worst Audition I have ever had...I think I have buried that deep in my psyche.
I enjoy performing live in a room, the nerves, the adrenaline. And all of the great casting directors, who respect actors and love the art, are a pleasure to audition for.

I once accidentally kicked a huge hole in a wall in the middle of an audition. It was a total accident and I was shocked, the casting director was shocked, and it was um...awkward. However, the director loved my audition and I almost got the job, but it went to a guy 25 years older than me.

So that COULD have been a bad audition, BUT it ended up a great audition, and whenever I see the casting director, we make jokes about "Joe Reegan" "proofing" the room.

What is your work ethic that made you so successful?

This business is incredible competitive and also totally subjective. I was trained to view the craft just like a pro athlete. You train. And train, and train and focus on what you want out of your life. Having a disciplined route, pushing out of your comfort zone, and always demanding 110% of yourself; and then checking in to make sure you are still having fun. If all that is firing, then you know you are on the right path.

You like to write. What do you write? Is it a passion or an outlet for you?

I started off writing little short stories that popped in my head. I journal a lot and the genesis of the short stories, often, come from that. I recently finished my first screenplay. I've notice I usually find myself writing about very dark things, some personal, some not... Writing is new to me, so at the moment, it's been a great outlet for me.

Tell us about your audition for one of my favorite shows, Chicago P.D.?

Working on Chicago P.D. was great, the cast is great. I was actually buying a pair of slippers (yup slippers) at a store in Los Angeles and I got a call asking if I could be in Chicago to shoot the next morning at 5am. I thought they were joking because it was 12pm on the West Coast. They weren't. So I drove home, didn't have time to shower, packed a bag and was on a plane by 2:30pm. I got to my hotel room in Chicago, read the script, slept for an hour, finally took a shower and was then on set shooting Chicago P.D. at 5am.

Share a time with us when you felt really lonely.

I'm sorta feeling lonely right now. I think we all have moments of loneliness. Its part of being human.

What do you think about people with mean streaks?

I think we all have our bad days. However, it's incredibly "easy" to be mean and criticize. It takes much more bravery to be open and kind-hearted in life. I've found that most often mean people are very stricken with fear about their own lives and life choices, and so I try to not take anything too personal. Easier said than done.

What's next on your acting agenda?

I'm working on a couple shows at the moment that will air in the Spring. I'm also prepping for a film that begins in a few months. It's a passion project, indie low budget sort of film.