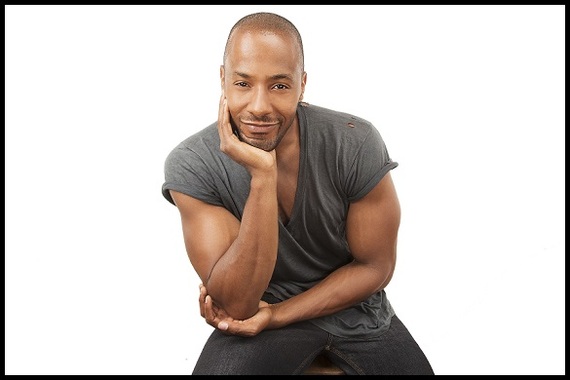 McKinley Freeman likes to laugh a lot. It's contagious! Really - try conducting an interview with laughing tears coming out of your eyes. Plus he talks a lot, which I love.

I really need to marry this guy. Woops! Did I say that out loud?

Tell us about your audition for Hit the Floor.

The audition came just like any other from my manager at the time. I went in for the role of "Terrance" actually! I did my thing, left, and that was January. JANUARY. Almost three months later, I get a callback for the role of Terrance for the Producers (whom we now know and love as show creator, James LaRosa and now, (woo hoo) VH1 Sr. VP of Development, Maggie Malian). Mind you, it's Friday, it's in Santa Monica, and I live in West Hollywood. It's going to take me a week to get home if I don't get in and out of this audition... I literally thought about that, don't ask me why. Anyway, I'm walking through the parking lot thinking about short cuts to get home and another producer runs after me saying, "Hey, wait...they want you to read for a different role." Great, right? Traffic. So I QUICKLY look at the scene, they say take all the time you need, and they let the next actor in the room. When that actor walked out, I was like, "I'm ready, let's do this." Did it. It was fun. Beat traffic. Found out they wanted to test me, and since they liked what they saw, I didn't look at the audition scenes or the script or anything until I signed in on the day of the test (I should add that I had a job on "Devious Maids", so that helped the confidence, for sure). We get to the part where Taylor Paige and I are doing the scene in front of all the execs and producers, and there's a moment at the end of the scene, where it's written that I take my shirt off (this is where it all started haha), so I do, and it surprises the s*@t out of Taylor, and she covers her eyes and starts walking towards the corner of the room. I follow her and when she turns around, she has no idea I'm right there, and she turned bright RED haha. That was so much fun.

At what age did you start playing basketball? Did you play any other sports growing up?

I would play here and there as a kid, probably seven or eight years old. I didn't really begin to understand the game until I played at the University of Illinois. I did play other sports, I played football for a while, baseball... I think I tried everything, but basketball was where my passion was.

You believe in God. Why?

Absolutely. I didn't grow up religious, but I grew up in a family and extended family whose roots were very firm in faith. When you see the examples that my parents, uncles, cousins set for my generation of our family and more, it's a compliment to them that I, and we, have become who we are. But I found that faith for myself. I volunteered at church and when I lived in Atlanta, my buddy, Malcolm Bachelor and I, used to wake up at 6am on Sundays to drive the church vans to pick people up for church that didn't have a way to get there. I was sincerely seeking my relationship with God, and through that, and the ups and downs of life, I've landed on a place where I believe in what I believe so truly, just like I believe the sun will rise in the east, and set in the west. That faith allows for the peaceful existence of other people's choices, regardless of our respective ideologies.

Have you ever been late to an appointment?

Ha ha, not that I can remember. Time is so important to me. It's literally all we have. I get it from my Grandfather, he was always on time... you know that saying, "If you're on time, you're late." That's him haha. But the times I have been close to late were when locations change, or when President Obama is in town (You might as well walk in LA haha.)

Is it in your Hit the Floor contract to keep your chest hairless? Do you get waxed, or how does that work?

Haha! The bigger question is which do you prefer, because I take requests haha. There's no waxing...ever...that sounds terrible haha. [AUTHOR'S ANSWER: Hairless, thank you!]

Tell us about the most vivid dream or nightmare you've ever had?

I've had some dreams that take way too many characters to provide context (ha), but I used to have this recurring dream when I was a kid about "Dracula." The first time I was freaked out, but over time it got real boring. I was like, "...so that's all you do?... all night...okay Drac... this isn't working anymore." haha.

You have two self-published e-books. Please share the experience you went through when working on the book and deciding to self-publish instead of working with a publisher.

To stay inspired creatively, I used to ask friends to send me a word, and in 10 minutes or less I'd send them back an original poem, inspired by that word. One night, after the Hit The Floor aired, I thought, why not. So, I asked people to do just that; send me a word. What began as a fun thing turned into something bigger. The words weren't words like "joy"; they were words like "pain," "regret," etc. I thought why not use this opportunity to share an experience through their words via my voice. Anyway, I had 600+ words in five minutes. I took the first 20, divided them in half, and created two eBooks, that contain 20 original poems inspired by people I've never met in person. Their social media names are listed in the books, and they received free copies. It was inspiring to do.

Are there showers on set of Hit the Floor?

Haha! There's a shower in there, but I don't think I can fit in it.

How about a behind the scenes story from All My Children and General Hospital?! What are soaps REALLY like?

Working on soaps was amazing for me. It was an opportunity to work and learn as I went. Since I was headed towards the business route (BS, Finance/MBA, Marketing - MIS), the last time I was in an acting class, it was my school's fourth grade production of the Wizard Oz (I was the Scarecrow). Working on the soaps was great for me, and I still have good friends doing amazing work on soaps like B.J Miller, Molly Burnett, and Sal Stowers.

You just produced a movie called Illicit about a married couple exploring the idea of extramarital affairs. How did you become involved with this project and what's involved in producing it?

I had a meeting with the team of the project, read the script, and I really loved the premise. From there, I dove right in. I started providing script notes, I sat in on every casting session, helped put out lots of fires...it was a full experience, and I loved being able to use the business side of my brain as well.

Nah, I'm kind of long winded, and I think that's translated in these responses as well, haha. Thanks for having me. Cheers.