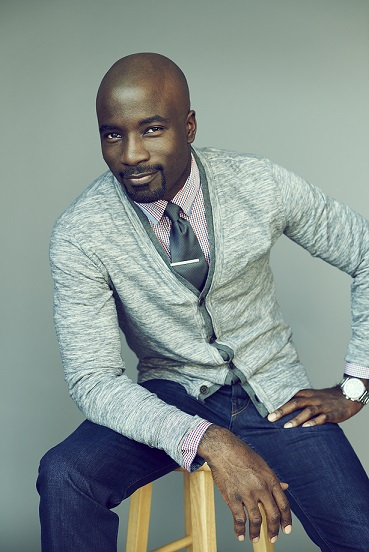 Mike Colter is the world's best kept secret. He's the new James Tolkan; you see him in everything but don't know where you've seen him. Until now.

Mike's career has catapulted from doing one episode character roles on different projects to multiple project episodes at the same time. You'll remember him from films such as Zero Dark Thirty and TV shows like The Following, Criminal Minds and Ringer which starred Sarah Michelle Gellar.

With so much work at the same time, have you ever run into conflicts? Who helps you make your schedule?

It's funny you should ask because conflicts sometimes arise when you're shooting two shows at once. That's why it's helpful that actors' agents give full disclosure of their clients' schedule. In the case of American Horror Story: Coven and The Good Wife, I was able to make it work because American Horror Story: Coven shoots on the weekends from time to time. My manager and agent usually keep the calendar in order.

Why do you choose to keep the mustache and beard?

As for facial hair I think I decided it was a good look after graduate school. I always shave it myself and trim my own beard. I change the look depending on the role. For Million Dollar Baby, I had no facial hair. For Men in Black 3, I had no facial hair but did wear a wig. For the next project America is Still the Place, I will wear only a mustache because it's set in the '70s and the real life character wore one. In life though it gives me something to groom since I am bald headed.

What makes you sweat?

Being unprepared for an audition or feeling under prepared.

The big budget films have money to do things that are not necessarily essential but sure are comforting. The catering is usually much better. And you have way more of anything you could possibly need. You definitely get a trailer. My shirt and and suit for Million Dollar Baby were tailor made. With indie movies you only get what's necessary to make the film and the jobs are condensed to make for less overhead. It's a sacrifice you make to get some stories told that otherwise would not be.

Which city do you call home?

How many tattoos do you have?

It's one and it's on my arm. I got it on a whim when I was 18 in Coco Beach, FL. I was a bit intoxicated, but not extremely so I was aware. I never got another because as I got older I realized it wasn't for me. I'm glad I stopped there but I do like them.

You're superstitious. Does that come from your upbringing?

Saying I'm superstitious may be a bit extreme. I just don't like to tempt fate if there is such a thing or to be presumptuous about things. I'm open to the universe and am available for things to fall where they may. I just try my best to be ready when they do.

I have a wonderful wife I met at Rutgers while we were both there. She was in the PhD program. She is not an actress. She definitely brings balance to my life. We actors can tend to bore anyone with shop talk.

Will you marry me?

What's your take on pets?

I was not a pet guy. Killed a lot of goldfish. Now I have a sweet adorable multipoo named Layla and she is phenomenal. When I travel I have a pet sitter who stays at home with her.

What's your workout routine? Do you go to the gym? Do you have a special diet?

I hate the gym so I try to diversify my workouts with swimming and basketball. Indoors it's less boring than running. I do find that diet is key. I eat lots of lean protein, no soda, no fast food or fried foods and a lot of water. But I love food and often cook.

What is something you MUST have every day or else you'd go crazy?

I try not to NEED anything because it can become a routine, but I am a big fan of the pumpkin latte in the winter and fall. They're pretty delicious.

I recently donated to a youth basketball league that keeps kids focused and out of trouble. I think team sports that are not too dangerous can be beneficial. I like animal shelter groups that try it find homes for dogs. There are tons of dogs who need homes. That being said the ones from the kennel are great too. That's where I got Layla.