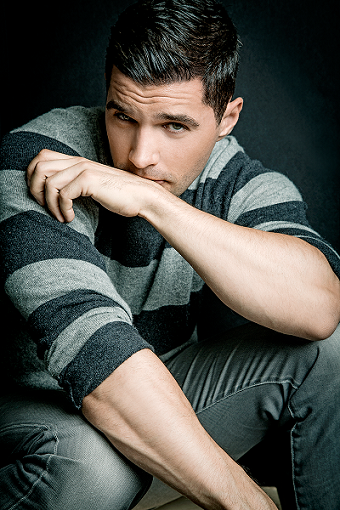 If you're a Ray Donovan fan, surely you've seen Nikola Kent kick some ass. I beat him up with crazy interview questions but I had to narrow the interview down so you'll never get to know how I asked him out, what he said, and why he will stay clear of me for the rest of his life. (Weird for me, right Readers? -- as Nikola is dark-haired.)

You play the recurring role of Davros Minassian on Showtime's Ray Donovan. How'd you land the gig?

I remember getting the audition and thinking that I didn't quite fit the bill. They were looking for a thug-looking guy that could do an Eastern-European accent. Though thugs come in different shapes and sizes, in Hollywood they tend to follow a certain archetype - 6'5" tall, no neck and looking like you start your day by waking up on the wrong side of the bed, every day. I basically thought the chances of me getting it were slim. However, the nature of this business is such that often times auditioning is the most performing you get to do. With "Ray Donovan" being one of my favorite shows, I was excited to go in. I had to do this long, very dark monologue written by Bill Wheeler, one of the show's writers/producers. I got to the casting office a little early, did a shot of tequila and went in. I remember the casting director telling me to "just have fun with it," which after a shot I might have taken a tad too literally. My manager called me a week later saying that I got the gig.

Tell us about the history of your name.

Being born in Eastern Europe, you are automatically blessed with a gift of a last name that nobody in the West can pronounce. Common offenders include surnames with far too few vowels or might contain letters that you can't find on your typical QWERTY keyboard. When the time came to get my citizenship in the U.S., I joked with my friends that rather than bastardizing my last name by attempting to transcribe it into something more pronounceable, I would do something even crazier and borrow the last name from one of my childhood's favorite comic book heroes. Needless to say, standing before the judge at the swearing ceremony I chickened out when it came to changing the name in real life, but then later revived it as my identity in the land of make believe.

What do you mean you're a tech/internet entrepreneur turned actor?

I've been interested in arts and architecture ever since I can remember. However, I was also always good at science. Upon leaving my family in Yugoslavia and finding myself flat broke after finishing high school in Minnesota, I felt that pursing sciences would give me a better shot at building a career after college. I studied Computer Science. Upon graduating I found my creative outlet in building companies. I like the process of building things and seeing them evolve. Starting from a seed idea and seeing it grow in the most unpredictable ways is what excites me. In that sense, the same process applies to making a film. You might have an idea of what you want to create, but each actor and each crew member will come with an innate point of view that will ultimately shape it into something that nobody imagined. That's exciting to me.

On Ray Donovan, you get to beat people up. Is there a stunt coordinator?

I took martial arts as a kid, however true martial arts and stage combat are vastly different. The number one rule is to make sure that everyone involved is safe and comfortable with what they are doing at all times. For that reason, there's always a stunt coordinator present who orchestrates all the moves within a fight, which gets exponentially more complex with every additional actor. One of the scenes on "Ray Donovan" involved seven people and it was probably the most fun scene I did. 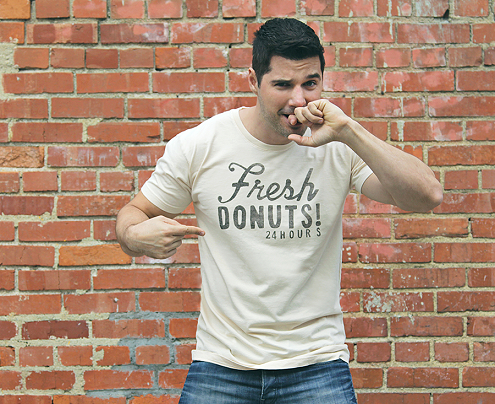 I could definitely eat a donut 24/7, Nikola! Woops, I got carried away! Ahem, watch Nikola's Ray Donovan episode trailer.

You left Yugoslavia at age 17. Why did you leave and where'd you get the money to come to America?

This is a longer story, but my happy childhood in Yugoslavia was interrupted by a devastating civil war, which in a matter of months destroyed the country's economy, taking along with it the prospective of having a bright future for my generation and many to more come. The country was under UN sanctions at the time. There were no flights in or out. The conflict was spreading from Bosnia to Croatia, with another one erupting in Southern Serbia. I soon realized that the only way to help my family and help myself at the same time was to leave. We didn't have any money, so my parents had to borrow money for an airfare. I remember boarding an overnight bus to Hungary and my mom telling a random stranger sitting next to me to take care of me. A day later I found myself in upstate Minnesota, and the journey began.

Tell us about your full scholarship to Harvard University and your major in computer science.

One of the many great things about Harvard is that your family's financial status has absolutely no impact on your acceptance. The admission policy is "need-blind." A few years ago Harvard introduced a policy making the tuition completely free for any student whose parents make less than $65,000 per year. For more than 90% of American and international families, Harvard actually costs the same or less than most public universities. I think the hardest thing about Harvard is getting in, and just how I managed to get in is something that I still ask myself every day...

I'm a geek and a hacker at heart. For that reason I always try to get away with doing less while getting more out of it. I get easily bored, so I like to switch things up. My workouts are 35 minutes max, and they usually combine some sort of a high-intensity interval training, things borrowed from CrossFit, and some weight training.

Do you prefer to keep your hair short or have you ever had it long?

Short is good. Makes it easy.

What would make you a better person?

That's a really good question and a difficult one to answer without a specific reference, but I would say that overall, it would be always reminding myself to be more mindful. That pertains to my relationship with my family, friends, the environment we occupy, and the world we live in.

Not at the moment. Between running a company, starting up a new one, writing a script and filming...my personal life has taken a bit of a back seat, but that too will sort itself out.

Anything else you want to add?

I was visiting my family in Serbia this summer. Driving around Belgrade, I found myself before a crowded park providing temporary housing for stranded Syrian refugees waiting to embark on the next leg of their journey towards safety. Witnessing that sight and saying that "it puts things in perspective" would be a vast understatement. Even though many media outlets in the US have been providing good coverage of this event, I don't think that people quite realize the magnitude of it. With some 4-million Syrians having left their country, this is the largest refugee exodus since the Second World War. Some countries have opted to respond to this crisis by closing off their borders and building fences. What's important to remember is that these are ordinary people like you and me. They are human beings, and as such they deserve to be treated with dignity and respect. We are lucky and fortunate to be living where we are, but a part of this fortune is being in a position to help those in need. Building fences around Europe is not the solution.