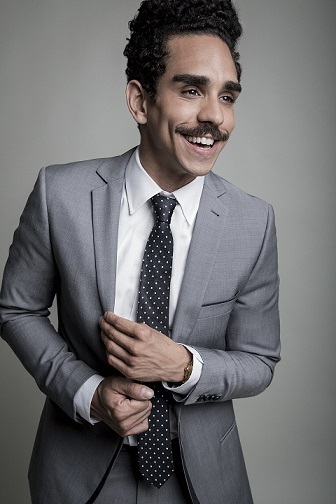 Oh, Ray! Everything about you puts a smile on my face! Let's light up the readers' faces with your fantastic interview answers!

You know you're crazy for taking on this role, right?

I'd say I'm pretty crazy! But more neurotic than anything else. I don't think it's crazy to take on this role. It was a no-brainer. When the opportunity to take on a role opposite Bruce Campbell presents itself you jump on it. I'd be crazy not to. Working with the legendary and horror icon Bruce Campbell, was more fun than you could ever imagine. Bruce is a great leader, so I just try to follow the leader and absorb as much as possible from him. I think the relationship between Pablo and Ash definitely mirrors and parallels the relationship between myself and Bruce. In both relationships both learn from each other, but it is clear that one is a veteran and has more to teach. Bruce took us under his chainsaw wing so to speak and led us in the right direction while also allowing room for us to bring ourselves to the table.

You're originally from the Bronx, yo. What made you pick up and move to Los Angeles?

I spent my childhood and adolescent years in N.Y.C. N.Y.C. had a major influence in the hustle I carry today as an artist, but L.A. is where I became a chill MAN, better actor and TV star. I moved to L.A. about 10 years ago... to Hollywood actually after shooting Meet the Fockers. It was the beginning of my twenties and a whole new chapter of my life, and I knew there was more opportunity for film and TB here than in N.Y.C.. I moved here originally by myself and then my best friend and high school prom date moved in with me. Together she and I survived and conquered La La land together. I currently live alone in my two bedroom bungalow in Los Feliz.

Tell us about the green make-up/gory effects on Ash vs. Evil Dead.

Firstly I'd like to say, we have an amazing makeup team. Whenever they are applying the blood it's super cold and the brushes feel like a bunch of Chihuahuas licking me. The blood is sticky and very hard to get off, but our crew spends a good amount of time getting it on and getting it off. People spend at least three hours getting their Deadite makeup done. I've never had the "green" makeup, but I am covered in blood every day on that set. The blood is made of something that taste like soap. I'm pretty sure its dishwasher detergent and corn syrup with red food coloring.

We take continuity photos in case we have to re-shoot a scene, but for the most part we try and get it right in one or two takes because sometimes that's all we have time for. We move very quickly. We shoot most episodes in five days!

Tell us about your typical day on the set of Ash vs. Evil Dead.

Usually we have a 4:30 a.m. pick-up call. I usually run lines or listen to inspiring music on the car ride over to set. My driver and bestie in NZ (Holly or Liz) usually have to endure whatever mood I'm in that morning. I'm not a morning person, but once I have a cup of coffee I turn into a crazy Chihuahua, which on our set is normal since everyone is a demon, Deadite or monster.

Once, we arrive on set we go through hair and makeup, and thus the blood baths begin! We have breakfast which is catered and I usually have a very Kiwi-inspired breakfast (avocado toast with a poached egg and a coffee).

After breakfast we head over to the set for a blocking of the scene for the actors and crew to see. Then we head back to our trailers while the crew is lighting and setting up cameras. I run lines in my trailer solo or with cast or as Bruce calls us "fellow thespians".

We shoot till about noon and then we break for lunch. At lunch time it's crazy because you sit with Deadites and demons at the table and somehow... I would find myself feeling like the odd ball. Most of our sets are located indoors in a warehouse we have converted and made into our own sound stage. So everything is in close proximity. After lunch we go back to shooting and in-between scenes. If I have some down time, I head over to the gym and train for upcoming stunts with our badass stunts team. I learned to ride a motorcycle and some preliminary boxing for this role and can't wait to get back to NZ to film next season.

Is that your real mustache?

Yes, this is a real mustache. The stache is real and my eyebrows are so thick I basically have three mustaches on my face. My friends think my mustache is dope and some say it reminds them of Prince. My friends all joke and say that my look is like a modern Puerto Rican Kramer [from Seinfeld] meets Prince. The ladies love it, but my mom secretly hates it. Many casting directors hated it and felt like it limited me. My agent actually hated the stache at first and then once I got the role, well... he changed his mind. He said he thought the stache looked fake and I looked like I was trying to look older. Someone at a party once made fun of me because they thought I looked like a magician / wizard. I think next Halloween we may see some Pablos of all ages out there with the Kramer top bush and three mustaches. 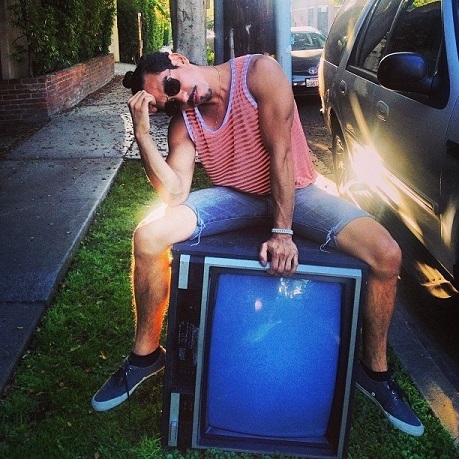 Ray Santiago. Thanks for the personal pic, Ray! You're one of the only actors that listened to me!

When you have nothing to do, what do you do?

I worry a lot. Run, eat, drink, yoga, workout, shop, drink coffee, watch good TV. What any typical L.A. actor does when he has nothing to do while unemployed.

Give us some family history.

My mom and dad were both born in Puerto Rico. My grandparents came to the South Bronx in the sixties and my parents had me in the eighties. My mother was a social worker and my dad stayed at home to help raise us. I come from a large passionate hardworking family in which almost all are named Ray. There are many Rays in my family. My dad's name is Ray, My brother's name is Lil Ray and my name is Ray Ray. My aunt married a guy named Ray, his son is Ray, I also have a niece named Chelsea Rae, and a cousin named Raven. I'm not kidding! When someone yells Ray at a family gathering half the room responds!

What are your childhood memories of people making fun of you?

As a kid people always made fun of my hands. I've been told I have weird hands and I have also been told I have beautiful hands, artist hands. I guess they are all the same thing. I am also left-handed and hold a pencil like no one else I have ever met. My friends and teachers had a field day with that!

Do you prefer outdoors or indoors?

I prefer the outdoors. I'm a big runner and love the outdoors especially in California. I hate being indoors for too long because it makes me feel trapped. I think I'm slightly claustrophobic!

What are your top three favorite television shows as a kid and as an adult?

As a kid I was a huge fan of Buffy the Vampire Slayer, Saved by the Bell, Beverly Hills 90210, I Love Lucy and Tales from the Crypt. Sorry that's more than three but I'm a left-handed Gemini and I'm really bad at making decisions. As an adult I would say Breaking Bad, Getting On, The Sopranos and The Comeback is my absolute favorite show ever!

Have you done conventions?

I just did New York Comic Con for the first time. It was epic. I'll never forget the moment when we surprised 2,500 fans with the first episode of Ash vs. Evil Dead. My co-star Dana and I watched from the wings of the theater and the crowd was crazy! Their responses let us know we had brought the Evil Dead back to life the right way. Right before we went on to do the Q&A, we looked over at Sam Raimi who was overjoyed by the crowd's reaction and had tears of happiness in his eyes. I said to him "Thank you for choosing me," to which he responded, "Thank you for being so good, pal."

Make the choice to believe in yourself. Everyday it's what gets me through the toughest of days. I'm so stoked to be living my dream right now. I think if you put your time into something for long enough the world will speak to you and guide you in the right direction. There were so many times I almost quit acting, but I made that choice to believe in myself!

I have a movie that will premiere at the Sundance Film Festival this coming January called Trash Fire. It stars Adrian Grenier and I'm super excited about it. Shout out to the director of the film Ricky Bates Jr. All of his movies are dark demented comical masterpieces; check 'em out!

I'm a huge fan of supporting the arts in public schools since I'm a product of NYC education (the High School for Performing Arts). I also support such charities like Art of Elysium and The Point Foundation which grant college scholarships to students of the LGBTQ community.