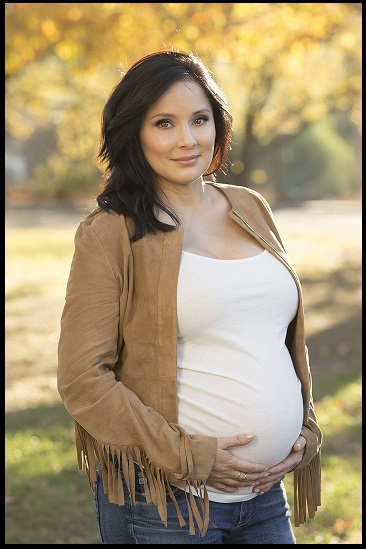 I love actors from New York. They tell it like it is, you know?

Jacqueline Piñol was born in Queens, but later moved to Los Angeles with her parents and two sisters.

So I was trying to figure out (in my head) if Jacqueline is still cool. I tossed in some off-the-beaten-path questions to throw her off, but low and behold, this Latina beauty stayed right on target. Conclusion: Jacqueline Piñol is still cool!

You are going to LOVE her as Pepito in Bordertown. Have you seen it yet? Let me know what you think in the comments!

Please also see Part II of this interview for some really good stories from Jacqueline!

You play Pepito in Fox's new animated series Bordertown. Tell us about your audition.

Nowadays with technology at our fingertips many, if not all, voice over auditions are sent via mp3. When I received the material for Pepito, all I was told was "Latin boy nine years old," and I was given some dialogue. Apparently there was a mistake in my breakdown, and it was supposed to say five years old, but it said nine. I sent it in as a nine year old, and days later had to resend as a five year old. I also threw in some takes with an authentic Mexican accent and some with an East L.A. accent as I was not sure what the actual character would be, so I played with it. Next thing I knew I had a session to go record. I thought it was a callback. On my way to the session my agent and I spoke and somehow I had missed the -- "you booked the role" part until I actually got there and realized, "Oh, I booked the role!"

I love voicing Pepito. He's a curious, mischievous little guy who innocently says things as he sees them. How do I come up with a five year old boy's voice... well, I have so many voices in my head. I have been giving voices to everything since I was five years old myself or even before that, I think. As a kid, I enjoyed playing by myself a lot. I was the voice of all the characters in my games from stuffed animals to imaginary friends to my crayons. Yes, I used to pretend my 64 count Crayola box was a school bus and I would arrange the crayons into families of parents and kids and spread them all around our apartment. All of them had voices or accents or spoke foreign languages (which at the time I just made up as gibberish). And the "school bus" would go around the whole apartment picking up the "crayola" kids to go to school. Wow I haven't thought of that in decades but it was such a fun game!

What can viewers expect in Bordertown? How is it similar and how is it different to other Seth MacFarlane shows?

Expect a dose of reality as harsh and crude as it may sometimes be but with a comedic twist. The reality in Bordertown is Caucasian Americans and Mexican immigrants live next door to each other in a border town and cultural differences or preconceived notions from one family toward the other bring up some potentially tense or politically charged topics. But, as with all Seth MacFarlane produced shows, the message gets delivered hysterically. This is what I love about Seth McFarlane and Mark Hentemann. They create projects that are just telling like it is. Some people can't handle the truth. I personally LOVE it. There is so much intellectual genius behind the words and the jokes. I really applaud the writers of this show. I also get to flex my chops by voicing a variety of other characters that appear in different episodes. I'm having a blast on this brilliant show!

You've done voice overs for other shows and video games, most recently the game Quantum Break, which comes out this year. Tell us how you got into the voiceover world? What do you like most about it?

YES! Quantum Break is finally coming out for Xbox ONE. SO excited about this too! I am not only the voice but also the image of my character. In so many ways this was one of the hardest jobs I have done. Motion capture is a whole other monster. The challenge I think comes from having to do each aspect separately but as if it's one. Voice, movement, dialogue, chemistry with the other actors, each of these things are literally shot separately. I worked with an AMAZING cast of actors on this like Lance Reddick, Aidan Guillen and Shawn Ashmore to name a few. I got into voice over work by accident... little did I know what a happy accident that would turn out to be in my life. I happen to be fluent in Spanish as if it's my first language and later in my teens I became fluent in a few other languages. (All my childhood years of gibberish actually turned into something!) Years ago, there weren't a whole lot of actors in my category that could speak American English with no accent while also speaking authentic Spanish and French or Italian. My theatrical agent had a voice over division and they asked if I would go out for foreign language or accented language projects. "HECK YEAH", I said. And there was no turning back. I had unlocked a whole new world of adventure for myself.

If you had 48 hours straight to do whatever YOU wanted to do, what would you do?

OHHHH I like this question. Hmm... several things come to mind but some I am already doing so I will say I would get on a pair of skis and go to Vail or the Swiss Alps and have them all to myself!!!!! I would SKI MY ASS off. I would just want to feel the wind on me and breathe the fresh air as I speed down the slopes and scream at the top of the mountains! Maybe I'd bring my hubby... and a few ski friends AND OF COURSE my dogs - on a sled! THAT would be SO AWESOME!!!!! I would do this over anything else because it would be such a release of stress! And who doesn't need an adrenaline rush/de-stressor in today's world?

Congratulations on expecting your first child in 2016! Are you the "OMG I'm flipping out my baby has to have everything in the world" kind of expecting mom or are you more laid back?

Oh yes mother-to-be time. I'll really need that 48-hour ski trip now please! In all seriousness, I am excited and yes nervous to be a mom but just being pregnant has been such an incredibly empowering experience. I never thought I would feel this way or be so in touch with who I am or as intuitive as I have been these months but it has brought so much more joy to my life. It has taught me to love myself more too. A human is growing inside me! My own hubby said he was a little envious that he'd never know what that was really like. And he should be. Women are powerhouses!!! We grow humans inside of us! That is some real sci-fi stuff... especially when you see your stomach rippling on the outside and realize it's your baby's arms or legs moving around. I am definitely more laid back about what my child will need. There is just too much "stuff" out there for moms-to-be and for kids and I can't handle that. LESS is MORE. (A box of Crayola crayons can go a long way you know what I mean?) I have definitely done my research to come to my conclusions about how I approach pregnancy, labor and motherhood. I am a fan and advocate of HypnoBirthing. It's so calming and peaceful which a woman needs when the hormones are going haywire...AND when everyone has an opinion about how you should do things. Oh yeah love those people... my favorite... NOT!

Be sure to check out Part II of my interview with Jacqueline Piñol.