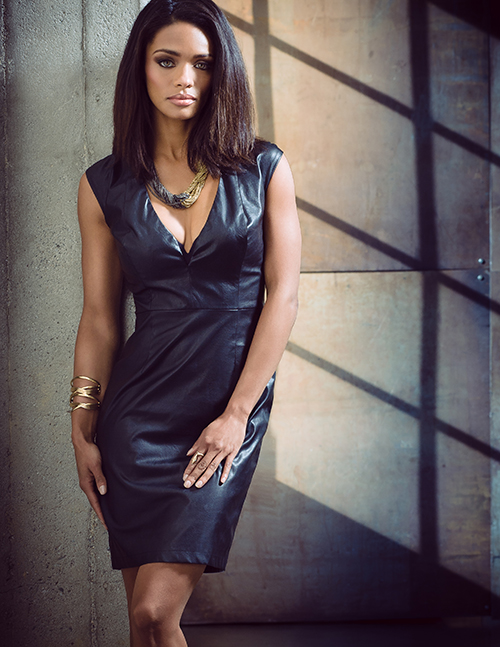 A beautiful and recognizable face is in the likes of Kandyse McClure.

From the age of 19, we've seen that face displaying her on camera talent through her eyes and expression - through acting and an excellent job of it.

What's equally just as fascinating is what lies behind those eyes. Haven't you ever wondered about your favorite actor or actress? When they give a devastatingly good performance in whatever we know and or love them for - it's human nature to wonder what lies beneath?

What was it that they had experienced in their own lives that enabled such raw emotion?

In a deep conversation with the intellectual beauty we learn exactly that. Kandyse wowed audiences in Battlestar Galactica and will be doing so again in the new Netflix series Hemlock Grove. All 13 episodes of the first season will be available for streaming starting April 19th.

It's my understanding that you have quite the back story with respect to where you come from.

I lived in South Africa until I was 11 when we first immigrated. My mom had sent me back there when I was 14 for summer vacation. I wasn't doing very well in school, my grades were slipping. I called my mom one day and told her that I wasn't coming back. I ended up staying there until I was 17 before coming back to North America. I have fond childhood memories of being there with friends, my grandparents, and my father. I missed it terribly and I travel back often. I went back during the SAG strike in December. In many ways, I still consider it my home.

Has your perspective changed any since childhood?

I have a wider perspective of the time I spent there. When I was growing up there as a kid, I lived under segregation and oppression. My family did everything they could to protect me from that. In many ways, I was not aware of how I was being oppressed because I didn't know any better. My mother, my father and all of the adults in my life were more keenly aware of the persecution of Apartheid than I was. As far as I was concerned, I was living a normal childhood. I knew which buses to take and which buses not to take.

Tell me more about the separation you experienced as a result of Apartheid.

I was not aware of not interacting with black people or with white people. As a system, Apartheid was brilliant in a sadistic way because the perfection of its separateness was complete. You didn't see anybody that didn't look like you. Having gone back to South Africa and being there for the first election, my mother voted at the South African consulate in Canada for the first time in her life. She was 35. The spirit of people when watching Nelson Mandela being released from prison and people coming together was amazing.

What was that like for you and your family?

Being in the country when we made the switch from Apartheid to post Apartheid I can remember the Rainbow Nation - and the word Ubuntu which means togetherness and this pendulum swing from what Apartheid was - which literally means separateness. The Ubuntu movement felt as though there were all of these different countries within my country to visit. There were all of these different cultures that I had never been exposed to before - languages I had never heard and a presence that was alongside me in my country without me ever having known it after all those years. I got to experience it all anew. Words can't describe that feeling.

How do you compare this to your experience of being in North America?

Living here in North America - I have been Americanized. When I go back home now, there are things that I have far less tolerance for in South Africa. We've come such a long way in terms of race relations and the economy as well as people's willingness to move on. There are still a lot of things that are frustrating about being in South Africa.

In your characterizations - in whatever role you bring to life, how much of that angst from living in Apartheid comes through in your portrayals?

Absolutely so much of it comes through and I am so grateful for the opportunity to be able to in instances like with my characterization on Battlestar Galactica and in more instances on Hemlock Grove. The writing of course might not be reflective of exactly the same situation, but I carry a collective sadness of shame, anger, and frustration. It's part of my collective consciousness from South Africa. Having the opportunity to transmute that feeling into artistry and have it affect someone where they can connect or relate to it, or even have it be a source of release and understanding is incredibly healing for me in a selfish way. (Laughs) Maybe that's why I die so well on screen. I've often played these incredible characters with an amazing depth of pain and inner turmoil. It is for better or worse a part of my legacy.

So, you're going to be bringing some of that skill and angst to Hemlock Grove, tell me about the show.

It takes place in Pennsylvania - Hemlock Grove, it sounds so pastoral doesn't it?

Yes, it actually sounds like the place where Wally and Beaver Cleaver would retire.

It does, doesn't it? On the show, we come into a town where everything seems quite pleasant but a young girl gets murdered. Everyone believes it to be a wild animal that did it, so the story unfolds with the town trying to figure out what happened. There is a sort of upper class and lower class fight going on between two families - the Godfreys used to be a powerful steel family, they really built the town from the ground up. They've since progressed into biotech and they still run the town. We have of course the matriarch, Olivia Godfrey played by the wonderful and amazing Famke Janssen. Then we have the Rumanceks which are sort of drifters and we learn about their mysterious connection to things going on. 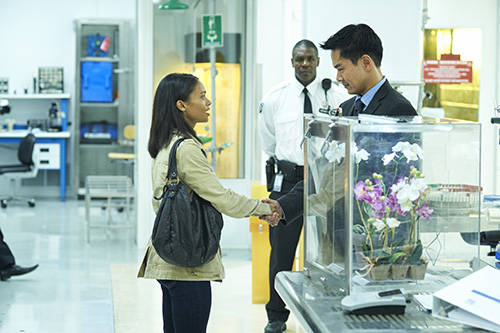 What about your character? Who is she?

I am playing as Dr. Clementine Chasseur who is brought in by local law enforcement to track down the animal that killed the girl. She is an animal behaviorist who will track down this predator. She sort of asks too many questions and while she is struggling with her own demons, she uncovers a few around her in some unexpected places. That's all I can say for right now - you have to watch it!

How incredible that you are able to take what others would perceive as negativity- because it is, and turn it into something that frees you on multiple levels.

This is going to sound pretentious and esoteric, but I truly mean it from the bottom of my heart. Acting has always been a spiritual journey for me. The very first project I ever acted on paralleled my experience so perfectly even before I was aware of it. The very first role I ever played was as a 17-year old South African girl who dreamed of being a star and left home to meet her mother in the big city so that she could pursue that dream. I left South Africa and met my mother in Vancouver and not long after that was given the opportunity to perform on the stage and have people chant my name.