As a person with bipolar disorder, it is difficult to watch my illness portrayed on television. So when I saw the promos for ABC'S Black Box, starring Kelly Reilly, I was skeptical. One commercial, for instance, showed character Catherine Black experiencing a wildly sexual manic episode, which I felt sensationalized my disease. So when I got the opportunity to view the first three episodes and interview Kelly, I was ready for the worst. Instead, what I found was surprisingly familiar; the series, and its star, are insightful and heartbreakingly honest.

One of the first aspects Kelly and I agreed on is that mental illness is the last bastion of discrimination that needs to be torn down in the media. Television has done this successfully with racism and homophobia, SO why not bipolar? After watching some episodes and speaking with Kelly, I can say that Black Box has a strong leading lady, and she wants people like me to know, "I've got your back." 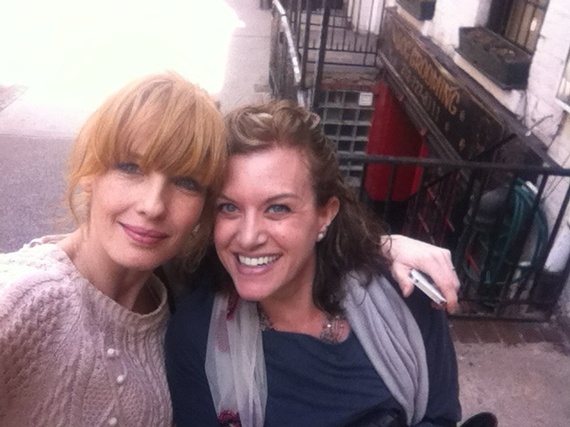 Kelly Reilly taking a selfie of us in Manhattan on a beautiful spring day. She clearly has my back! (2014)

KR: I am amazed that I've come across so much ignorance. I find it difficult listening to people speak so unabashedly about "crazy" people that to me, it is shocking and uneducated. There is no edit on how people can speak about mental illness. It is still such a taboo subject, we are still facing a lot of prejudice, which frustrates me because I immersed myself in everything I could read and met as many people as I could that live with bipolar.

As a discerning neurologist Catherine can fix her patients better than she can fix herself. Bipolar disorder is a chemical shift in your brain and it changes your personality. Unfortunately people can't tell the difference or understand. I want the audience to see Catherine has no will power over this, AND she can't control it. To me, is a powerful and important message.

EL: I think that's why people with bipolar keep it a secret and isolate themselves -- because you think people are going to think less of you. I lead a very isolated life by choice. I tried being open and honest about my condition but it knocked me and my family  down, and the end wasn't worth it. Does Catherine keep it secret because she is afraid of what her colleagues will think?

KR: For Catherine, its easier to keep quiet so she doesn't have to deal with all of those attitudes she knows are out there. Also, from what I understand, for people who have not come to terms with their illness like Catherine hasn't, it is more common to keep it quiet. As for her loved ones, I think she has deep shame and doesn't think she is worth loving, which I think is totally wrong -- she most definitely is worth loving.

EL: So she feels because of bipolar THAT she is flawed and damaged. Sadly, that is something I relate to.

KR: It's a lifelong struggle. That's what is so interesting, because people will say to me, "That's not bipolar." I say how do you know? It has to do with your base psychology. Catherine's mother committed suicide. I feel that loss makes her experience with this disease different. Losing a parent to mental illness is quite traumatizing.

EL: I have to say I get pissed with the boyfriend because your relationship is reminiscent of arguments I've had with my husband. The boyfriend finally knows she is bipolar AND he decides he is going to help her stay on her meds to understand more about her illness. Then comes the scene where he comes home late from work and Catherine is waiting up for him talk with him about something important. She starts to explain everything and he pounces with questions: "Why are you up? Did you take your meds?"

She breaks a vase and screams, "Don't ever ask me that!" I cried when I saw this. I just wanted him to listen to her perceptive points and not marry it to her bipolar. Even though I am sick and take 20 pills a day, that does not mean I lose my ability to make a valid point. Every time someone point out the bipolar, I think all they see in me is the disease. Sadly, that is when my relationships with people have fractured.

KR: I think Catherine has to find the right person and come to terms with her bipolar. That's why in the beginning, I didn't want people to think I was representing bipolar as bad but I had to show the extreme. I have to take her on the journey that brings her to a place where she doesn't just have bipolar, but she lives with it in a better way than she lives with it now.

EL: So is it about acceptance?

KR: I think it has to become about acceptance. But it's going to take time because Catherine is in love with her illness, and that's taboo. She loves her illness without being numbed. She loves her hallucinations and that she has the same disease as the cool gang: Billie Holiday, Ernest Hemmingway and Sylvia Path. She loves the fact that she's somebody.

EL: Yes, but her psychiatrist reminds her that these "great minds" all died because of bipolar. Billie Holiday -- acute alcoholism. Ernest Hemingway -- shotgun. Sylvia Plath -- gas oven. I remember when I was diagnosed in 2008. It was during my first psychiatric hospital stay and the doctor said, "I think you are bipolar, but don't worry you're in good company." He listed all of the same amazing people. At first I thought, "Great, I'm a genius." But I never put together all of those suicides until Catherine's psychiatrist went through the list on Black Box. After nearly six years of enduring this illness, I think, "Great, I'm with the cool gang too, but there's still that little voice that says I'm not bipolar, the doctors got it wrong, I'm fine." [We SAID it simultaneously]

KR: (laughing) Exactly, I'm fine. And when I said all that to one of the psychologists that I worked with they said, "Now you're starting to think like a bipolar person."

EL: What about seeing bipolar as a personal weakness?

KR: It breaks my heart that people would think that, because it's not a personality weakness. You don't choose it, so therefore I don't see it as a weakness. Can I see how a person seeing themselves as a damaged human being, not worthy of a normal healthy life with the respect of her peers and loved ones? Yes, and it's sad.

EL: It may not be a personal weakness, but when your behavior is off, you pay a stiff price -- even if you are trying your hardest to stay healthy. People avoid you, break up with you and step out of your life. Do you think Catherine's behavior has ever alienated her from friends and family?

KR: Yes, absolutely, and you're going to see more of that as the season goes on.

EL: Ok. On a lighter, funnier side, where did you get your dance moves? Were you trained professionally? Because you really have some good moves.

KR: (uproarious laughter) No, no, no I am not trained. I just love the idea of a person just wanting to move. They didn't give me a choreographer, so I just went for it. I was so embarrassed and in a bad mood the day we shot it. I wanted to go to a place where she has joy and feels free. The dancing is hardwired to her brain and is also very addicting.

EL: I loved when she was back on her meds and she did a little jig in the hallway when she figured out what was wrong with a patient. She wasn't manic -- it was just Catherine dancing. It gave me hope she would be integrated with her illness. Again, bipolar is only a part of you; it doesn't have to take all the fun parts away.

KR: In the beginning, we had to show this wild fractured person living with this illness with the hope she would eventually let her illness into her heart.

Black Box airs on ABC on Thursdays at 10pm EST check your local listings
Kelly Reilly can also be seen in Heaven is for Real in movie theaters now
Interview was edited for length.