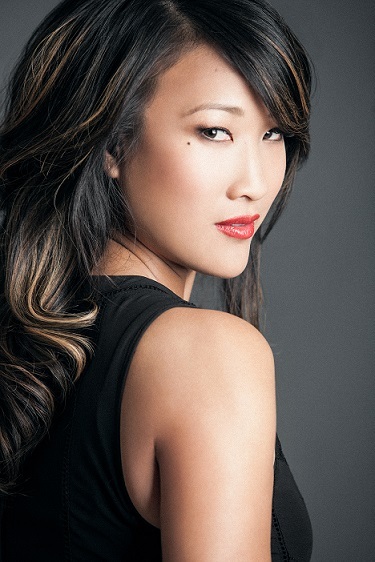 In Part I, we learned a great deal about Tina Huang and her acting career. In this Part II, we shake it up a bit by adding some tidbits about Tina that you never knew ;)

You're Taiwanese-American and speak fluent Mandarin. What's your opinion on being typecast as an actor? What are your thoughts on Asian representation in American television and film today?

Things are getting better for Asian American actors, and I have been fortunate to get roles on TV and film. But there is still a long way to go. Many roles are still stereotypical or call for an Asian accent. There are few shows with Asian-American leads playing Americans, rather than Asian immigrants. You have to remember that Lucy Liu was already a movie star, and it took her this long to get her own TV show. I think it is important for young actors of color to see people like themselves on TV and in movies. Hopefully, things will continue to move in the right direction.

Give us some fun facts about your Tisch School of Arts days.

I was accepted to three prestigious conservatory/theatre programs when I graduated from high school: NYU's Tisch School of the Arts, Boston University and SUNY Purchase. I'm not sure why I felt compelled to go to NYU. It just seemed like the right fit. When I was sitting and waiting in the audition room, I was so comfortable that I fell asleep.  I was close to choosing Purchase as they had a wonderful program then but I couldn't ignore my gut instinct that told me I belonged at NYU. It was a great experience. It was challenging and fun. I was so busy I had to schedule in my bathroom breaks. I was always wearing pajamas in public. Everyone in the theatre school was always in pajamas. I lived in a tiny apartment in Alphabet City which is still my favorite home to this day.

I got good grades in school. I was on the Dean's List a couple of times. My favorite experiences include travelling with one of my classes for a 14-day cultural exchange with students at the University of the Witwatersrand in South Africa, studying abroad in Florence, Italy for a semester, and performing in an off-Broadway musical called Kaspar Hauser directed and created with Liz Swados. Michael Feldman and I played conjoined twins that were joined at the head. We shared every line, alternating words. It was very hard but very funny to rehearse. Sometimes I think we still share a brain. College was special. Everything was weird and new. I grew a lot during those years.

Though NYU was expensive and I had a lot of debt, it was worth it because I met some of my best friends in the world there. I collaborate with many of them today. For example, I am co-artistic director of Ammunition Theatre Company with NYU alumni: Malcolm Barrett, Arjun Gupta, Karla Mosley, Carlton Byrd, Michael Feldman, Brandon Scott, and Julie Bersani. We also have other fantastic company members that are working actors and community activists like Karla Souza, Vinny Chhibber, Ari Boyland, Yara Martinez, and Garrett Mercer. It's been exciting to have really talented people all around to keep me inspired and competitive in a healthy way. Our theatre company's mission is to reflect the diverse and evolving identity of America and to engage with the community around us. I'm very excited to announce our upcoming first season for the fall of 2015.

At what point did you decide to move to California?

I decided to move to San Francisco in 2003 after I graduated school and NY was still feeling the effects of 9/11. My boyfriend at the time got into grad school at Stanford University. At first, I couldn't see myself leaving my beloved city but then I started to wonder what other kinds of life I had yet to experience. I wanted to meet new people that thought differently than me. I wanted to hike. I wanted to get one step closer to Los Angeles. New York was just so intense all the time and I realized I kind of lived in a bubble. It was bittersweet to say goodbye to NY but luckily I was working on a friend's theatre show that brought me out to SF so I had purpose the minute I stepped off the plane. I immediately met so many people in the theatre world and everything grew from there. In 2007, I got cast in an indie creature film called Pig Hunt directed by Jim Isaac. It allowed me to join SAG and also gave me that extra push to move to LA. My boyfriend had also become my husband during this time and I was extra lucky that he was supportive of me pursuing my dream. Two of my best friends from college happened to be moving to LA from NY too. We all decided to get an apartment together. Living with my two friends was fantastic though I missed my husband. We lived apart for two years. Most new friends I met didn't believe he existed. I would explain that he was a scientist finishing his PhD at Stanford, which I admit sounds too good to be true. While it was fun living with my friends, I will say it was a little challenging to get used to living with two guys. But I kept busy with one of them, writing, shooting and editing our own sketches, interning at casting offices, hustling...and eating loads of instant ramen noodles to save money. Finally, in 2009 my husband moved down to LA and we moved back in together. I still occasionally eat instant ramen noodles out of nostalgia.

I'm grateful for my mother. She was a strong role model for me. She was a shrewd business woman with a very creative mind. She was also the hardest working person I had ever known. She set an example for me. She became a very successful business person working in insurance, financial planning, real estate and was a notary public. She was proud of the fact that she accomplished this despite her "broken English." She also raised three rambunctious children and helped my father with his travel business. She was a super hero. She was tough when she needed to be but soft when it mattered. When she got very sick, toward the end, she taught me about grace and patience. It was a hard time in our lives taking care of her, but in the end I am grateful for the time we had together.

Which #OrphanBlack clone is your favorite and why?

I love #OrphanBlack! Tatiana Maslany is fantastic. I'd love the opportunity to play a role like that. It's so hard to choose a clone! I think I have to go with Helena because she can be vulnerable, fierce, dangerous and funny.

My mother was diagnosed with early onset Atypical Parkinson's Disease when she was 52. She had come out to visit me in San Francisco for the first time. She had changed since I had last seen her in NY right after I graduated college and before I had moved west. I remember noticing that her face was unexpressive which was strange for her as she usually wore a smile. Her feet seemed to shuffle and her hands were slow to count money when paying for a restaurant bill. She returned to NY. Her odd behavior and discomfort really bothered me so I took an online test and answered questions as if I were her with the symptoms that she had described to me and I broke down in tears when the result recommended I see a neurologist as it might be Parkinson's. I urged her to go see a neurologist in NY. She remained strong, stoic, but I was devastated when she was diagnosed. My mother's journey was a hard one. I often felt at a loss and didn't know how to help her. I often couldn't find literature in Chinese so I would do my best to explain things to her. We all needed support and sometimes those resources were scarce. We needed advice, information on clinical trials, new medications, how to deal with insurance companies, doctors, etc. I'm happy that the National Parkinson's Foundation and The Michael J. Fox Foundation for Parkinson's Research exists. I want to help raise awareness because it really can be isolating for both the person who has been diagnosed and their family. I want to let people to know that they are not alone and that scientific research is important and necessary.

The Lower Eastside Girls Club is very special to me. It was founded by Lyn Pentecost, who saw a need in the neighborhood for a place for young women and girls to go. Its new building is in Alphabet City on Avenue D in NYC. And it is hooked up! It now houses a planetarium (designed by Dave Pentecost), a large community room, a garden roof, an airstream converted into a recording studio, an art gallery, a science laboratory, an industrial kitchen, and a cafe. The girls can prep for college, gain entrepreneurial skills in the bake shop, learn to produce music, dance flamenco, take photography -- the programs are endless. It is so amazing to see young women flourish there and see them imagine themselves as something while gaining practical skills.

Not sure what else to say, I'm very thankful for every moment so far. Every up and down. I have good people in my life. I love what I do. I love the people I get to create with and create memories with. It's all pretty sweet.

Be sure to read Part I of my interview with Tina Huang!