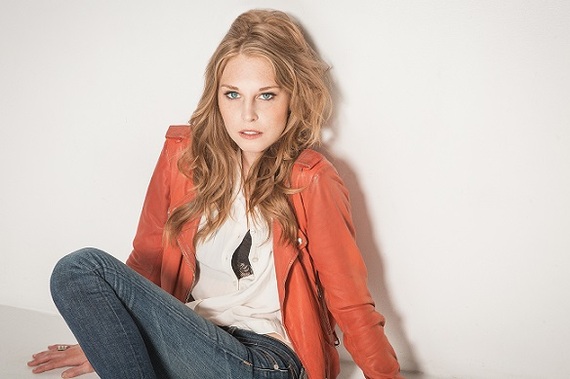 Tonya Cornelisse is all over the map!
Twitter: @TonyaCornelisse . Photo by Bobby Quillard.

Have you heard of Tonya Cornelisse? Say whaaaaaat? Get with the program, people.

Tonya has two film projects being released within five months of each other. Did I say two films? I meant FOUR films!

She is set to star in Yellow, alongside Melanie Griffth, then a scifi/horror film Lost Time. Next comes A Leading Man where Tonya plays a modern day 'Samantha Jones' and finally she's featured in Pele, which is produced by Imagine Entertainment's Ron Howard. Now print this paragraph out and hang it on your wall. Did you do it yet? Did you do it yet?

But let's just say you're more into theatre. Tonya just finished performing the role of 'Shelly' in the revival of Sam Shepard's Pulitzer Prize winning play Buried Child at the Whitefire Theatre in Sherman Oaks, CA. I'm sure you'll be able to see her in future theatre. But for now, if you see her walking on the street, say to her, "You GO girl!" Really, say that. I mean it. Then she'll know you read this.

You're having a breakout year with the release of four film projects! But you also love to do theater. Tell us the story about how you got your Actors Equity card.

Ah. Great question! I was 17 years old and graduated high school early (FYI, this is not because I am sort of a Doogie Howser but due to my mother needing to get me out of the house at age four, as opposed to five - I was a handful).

I moved straight to NYC upon graduation from conservatory and desperate to "work" with real professionals in front of a real audience, I auditioned for the touring company of Charlotte's Web when they needed a last minute replacement. I got the gig and was on a plane to Jacksonville, Florida (God save me). I eventually went back to NYU and finished my degree...haha! I am very proud to be part of that union.

What is it with you and horror films?

I don't shy away from things & err, go for the gut! :-) I actually grew up watching Night of the Living Dead and loads of Hitchcock and old suspense films. I am a huge fan of Twin Peaks and was obsessed at a very young age with the genre. As an actress, it was something I never even thought about it really - doing a film based on the genre, but there is something with that elevated level of reality rather it be comedic or tragic that is very challenging and wonderful to attack ~ you get to go there and to do it well. To answer your question though, it is just a project to project basis for me when it comes to approaching a project.

What's your favorite place in the world?

This is probably going to sound pretentious but it so isn't - CAFE ST. REGIS. It's a diner ... in Paris - haha. It's the little tiny haunt that has been there forever on the Île Saint-Louis off the Seine river - I spent a very long, very rainy afternoon in there a few years ago playing Gin Rummy - with a few bottles of champagne and a couple orders of french fries. This gang of Gerard Depardieu characters were part of the furniture at the bar and had a huge camera that we kept taking loads of photos that they were supposed to send ... I never saw or heard from them again. It was like it never happened. First place that came to mind ~ ahhhh...

Who are your favorite actors and why?

Gena Rowlands is an icon of mine. Woman Under the Influence, Gloria. That's my deal. I want to do films like that - all the time! Peter Falk was one of the best ever in my opinion. I think Robin Wright Penn, Jessica Lange and Jane Fonda are all turning out really interesting and inspiring work right now!

Have you ever made a mistake while doing live theatre?

Mistakes happen in a play every performance you see ... unless, it's missing an entrance ... then we call them happy accidents & seize the moment ! The great thing about live theatre is it's like life - one big messy rehearsal - that's the performance, that's the actual life itself.

You've won several Best Actress Awards. Who does the actual nominating for these awards? Did you go out and celebrate?

I've never been one to turn down a glass of bubbly so.... When in Rome - In terms of the nomination process, I have no idea - monkeys & ponies? I appreciate it though! Thank you mysteries ones! ... who get Meryl Streep on that ballot every.year. Haha!

You've played so many diverse characters. Do you ever bring your REAL self into any of your characters?

To quote the late, oh so great Robin Williams "The more personal you make it, and the more specific you make it, the more people will relate to you". That is my answer to that one in a shell of a nut.

One, of the most recent memorable characters (for me) was Starla in YELLOW ... this chick! Yellow was written and directed by Nick Cassavetes and Gena Rowlands plays my grandmother (see above to how happy that made me). Starla is a single mom and living paycheck to paycheck in rural Oklahoma .. she's got a mouth to put a gaggle of truckers to shame and not ashamed of her extremely dysfunctional families past, present and future. Scrappy and sassy are words that come to mind. She struts, as opposed to walk. I had the best time with this one.

You're doing voiceover work for the #HIDDENseries audio books. How does that work?


I read the manuscript straight off my iPad in a sound booth at a sound studio with a very fancy audio engineer. I am recording it right in Hollywood. I love this series....go get it! I am not just saying that as I am the "voice" of it. It has demon sex in it!

Be nice to animals. Be nice to your mom. Twitter & Facebook is my name @TonyaCornelisse if you fancy. I will mostly be obsessing on the return of Twin Peaks and inappropriate kids drawings.