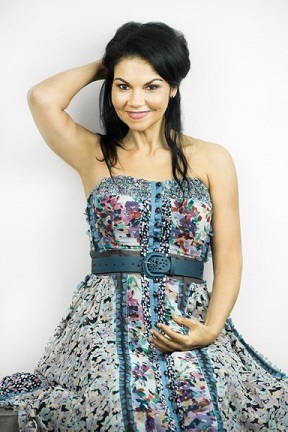 Juliette Fairley sure has a secure head on her shoulders! That is, if a vampire from her new film Summer of Blood premiering at the Tribeca Film Festival doesn't bite it off!
Twitter: @JulietteFairley
Photo Credit: King PDT

No one can ever tell Juliette Fairley to quit her day job OR her night job. This unstoppable woman has a successful writing and acting career. Or is it a successful acting and writing career? Either way, Juliette has what it takes to make it in the big city that never sleeps.

Your movie Summer of Blood just premiered at the Tribeca Film Festival. What's it like playing a creepy vampire?

It's every actress' dream to wind up in a movie that screens a prestigious film festival like Tribeca or Sundance. I never dreamed it would be a vampire comedy that would get there. For the past couple of years, I have felt pigeon-holed in dramatic roles in social commentary type films about a single Mom or a gangster wife. For me to get a role like this in an Onur Tukel film is groundbreaking so I loved every minute of playing a creepy vampire. It was so much fun. I hope to do more comedic roles in the future.

Talk about how you got the part.

I met Onur at a premiere for Red Flag, which is a movie that Alex Karpovsky directed and that Onur starred in. Onur mentioned to me at the party that he was about to film this movie called Summer of Blood and and that he had a part in the movie for a woman of color. So, I emailed him an audition video and I booked the role.

Describe the make-up and eye contact process. Was the role FUN or GRUELING or both?

It was so much fun! It was time consuming but I would do it all over again because the cast and the crew were cool. We pulled all-nighters but the director had a vision and it got done. The contact lenses were easy but the fangs had to be custom fit and that required creating a mold of my dental structure in order to fit the fangs on my teeth -- that was grueling. I had to lay down and hold the fangs in place until the clay took the form of my teeth.

Tell us about your dual citizenship and family history.

My mother is French from Paris and my father is African American. He was in the Air Force and was stationed in Paris and that's how my father met my mother. My mother is a typical blond, blue-eyed, snippy French fashionista -- 100 percent. I am mulatto or bi-racial, whatever you want to call it. I was born in a suburb outside of Paris called Chateauroux.

Growing up bi-racial was challenging because there weren't many others like me where I lived in Texas. It felt lonely that there weren't girls my age who shared a similar background. I had white friends in elementary and junior high school but I never quite fit in completely. There was always one or two Texas white girls who didn't want me in the circle. So eventually I'd get kicked out. My street cred with the African Americans and Mexicans in school only went so far because I was different; I didn't speak Spanish so the Mexicans didn't have that much to say to me. My mother forced me to wear clogs from Holland to school and the African American kids made fun of my shoes and because I had a white Mom my African American friends didn't completely trust me. They tolerated me but were also very critical of me and made fun of the way that I dressed because my mother dressed me in a European way. The white girlfriends I did manage to keep had European or Jewish mothers who were friends with my mother.

Not too many people can use both sides of their brain! Explain yourself.

If you were forced to make a choice, would you choose writing or acting?

I would choose acting because it's more collaborative and it involves other people. Writing is lonely.

You dabbled a bit in California. Why did you choose New York as your home?

I love Los Angeles. Driving a car is what brought me back to New York because L.A. is so spread out and I got lost a lot. It's more expensive in L.A. because you have to pay for a car and car insurance. There was also this issue of moving violations. If you got too many tickets from running a red light or speeding in L.A., they take your driver's license away. I was close to the limit so I came back home to New York where I could take the subway and not worry about those things. It was a practical decision but I am in L.A. a lot for auditions.

Why are you fixated on stories about money and cannabis? Who reads your articles, some of which can be found at Main Street.

When marijuana became legal on Jan. 1, 2014 in Colorado, my editor asked me to write about it as much as possible. They have created a whole entire page on the website dedicated to marijuana and they need content. That's how I developed this niche, which is interesting because it's an emerging industry and investment money is flowing there. In order to get a paycheck as a freelancer, I write about topics that pay and for now the legalization of cannabis is a hot topic that pays well. Entertainers have to find a day job that pays the bills and is flexible until they're earning all of their income as an actor, which may or may not happen. Being an actress is a huge gamble and you need a backup whether it's a spouse or a profession. I am grateful I have a flexible profession that pays the bills and is also interesting. Believe it or not, writing about the legalization of pot and the investment money that's going into it is interesting.

What's the craziest thing you've ever done and how did it affect you or the people around you?

Being a liberated woman, supposedly. I asked a guy I liked on a date and it was a disaster. He was rude to me the whole time and I don't understand why he even said yes. Since then, I've never made the first move with a guy. Ever.

How did you become involved in acting? Why does acting interest you? Is the writing just so you have a steady gig?

I have always been a good writer. I wrote other people's essays in college. It was something that came easily. It runs in my family -- my father is also a good writer. My mother is a phenomenal painter.

Acting is fun. It's fun and creative to play different characters. I also like the people in the industry because they have a vision and want to be creative. I like being around others who value creativity because not everybody does. The guys who filmed Summer of Blood (the sound guy, the camera guy, the producers) were also directors who had scripts they were trying to get produced.

Name three things no one knows about you.

1. I was on the swim team and played water polo in high school. I worked as a summer lifeguard before moving to New York. I would jump in the water and save people if they looked like they were drowning.

2. In addition to writing about the business of cannabis, I also write about personal finance.

3. I am entrepreneurial. I had a paper route in junior high school. I used my bicycle to throw the newspapers on people's front lawns. I might have lasted a week or two. It was really hard. 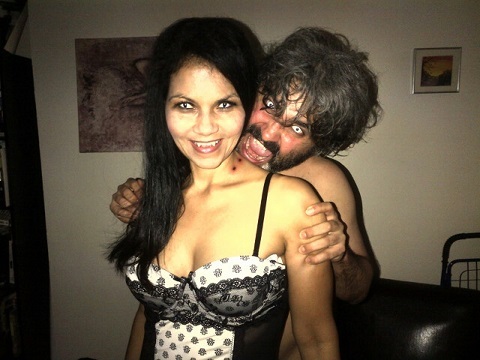 Juliette Fairley and Onur Tukel behind the scenes of the film Summer of Blood which premiered at the Tribeca Film Festival.

What did you do at the opening of Summer of Blood? Who styled you? How'd you get there?

I live three blocks away from the theater where SOB premiered in Manhattan so after getting my hair and make up done at Caravan at the Carlton Hotel, I took a taxi. The stylists at Caravan fitted me with a dress.

There was a Q&A and after party and I reunited with the cast and crew. It was good to see them all again. But it was raining so my hair poofed a little. Oh well, nobody's perfect.

What do you dream about when you're sleeping?

Last night, I dreamt about a big golden dog. The dog was friendly. It came up to me, sniffed me then I hugged it and it licked me. I also dreamt that my parent's home had become a greenhouse and they were growing cannabis plants inside the house. So there were green cannabis plants everywhere and when I asked my mother about it, she said that they had decided to grow marijuana. When I looked at my father in the dream, he was eating the leaves from the cannabis plants. I am not sure what the dream means, but it was funny. I have an active imagination.

What in life gives you the biggest sense of accomplishment?

This film and my on-air correspondent work because it's so difficult to secure these positions in life. They are what you call dream jobs that come along once in a lifetime. I am grateful I was in the right place at the right time and had the talent to book these jobs.