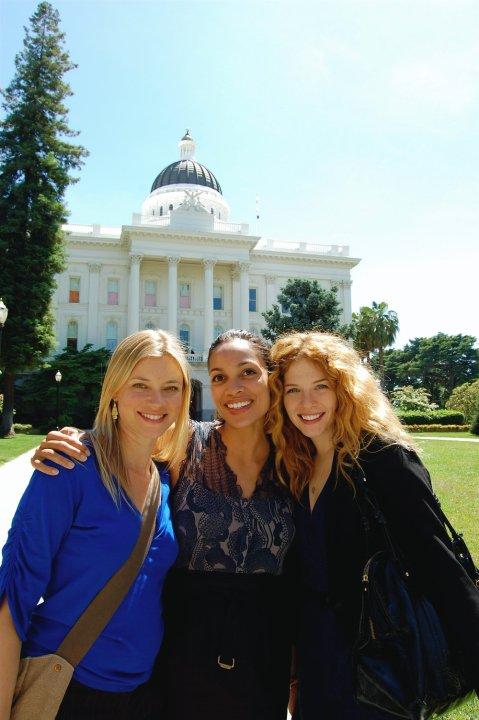 Gov. Arnold Schwarzenegger isn't the only celebrity walking the halls in Sacramento. On Tuesday, June 1st, actresses Rosario Dawson, Amy Smart, and Rachelle Lefevre joined Environment California's legislative director Dan Jacobson at the California state capitol, to lobby members of the Assembly for their support on AB 1998, a high profile bill that would ban plastic bags.

Earlier in the morning, the four joined Assmeblywoman Brownley, representatives from the California Grocers Association and the United Food and Commercial Workers International Union, Heal the Bay, and Californians Against Waste for a press conference highlighting the historic wide-spread and diverse support for this legislation.

Bringing great attention to what is at stake, actress Amy Smart noted, "California's economy is pumped up by the $53 billion that is generated each year as a result of these clean beaches." Rosario Dawson spoke on the reality that "nothing we use for 5 minutes should pollute our oceans for 500 years." Rachelle Lefevre noted the coalition is serious, saying, "if Sacramento can't or won't get it done, we will work with mayors and others around the state to solve this problem."

Their message was heard: the following day, the California state Assembly passed AB 1998 with 41 votes. AB 1998 (Brownley) would ban grocery stores, pharmacies and convenience stores from giving away free plastic bags at the point of checkout.

The bill now heads for the Senate, where it will go first to either the Natural Resources and Water Committee or the Environmental Quality Committee.