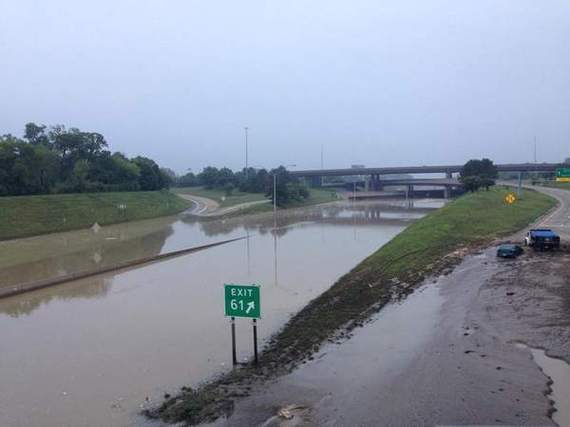 I remember the feeling of helplessness all too well. And this Monday evening it happened again.

Our son was three weeks old and we were camping in northern Michigan when we got the call from my brother-in-law, who just lived around the block from us.

"We got a ton of rain, the streets are flooded. I shined the flashlight down into your basement through the window and the light bounced right back up."

Not a good sign since the carpeting had just been installed three months earlier.

We bought the Royal Oak house in 1993, a year into our marriage and waited a couple years before we decided to finish the basement. The inspector said he didn't see any signs of water-issues but we wanted to be sure. Two years of thunderstorms later, not a drop. So up went the 2x4s, the drywall, the electrical outlets and finally the carpeting -- we'd doubled our 780 ft. living space!

Then, the night that Dennis called, the "10-Year" rain happened -- that's what the drain commissioner called such a heavy rainfall that the storm drains can't handle the volume and the water gets pushed back into your house through the drains in the basement. Where we were located, that included a fine blend of rainwater with sewage.

We arrived home, driving with a knot in our stomachs for four hours and smelled the damage before we saw it. Too many nice things -- soft absorbent -- things, were left on the ground such as boxes, books, stuffed animals and even vintage hats from Patrice's grandmother. 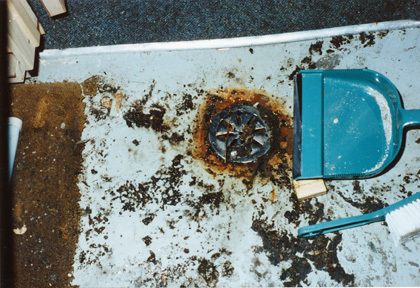 Not as innocent as it looks.

We called State Farm and were told how sorry they were--how many calls they had received and regrettably how sad they were that we weren't covered. I looked over my policy and saw "flood insurance" listed.

"I'm so sorry, Kevin, but that doesn't include drain backup."

"But our basement is FLOOD-ed," as the knot became a triple knot.

"But don't you guys offer some kind of protection for this type of thing."

"We don't, but some insurance companies offer a separate rider for drain backup."

Who knew? I didn't even know what a rider was, let alone the difference was between a flood from Lake Michigan and a flood when the river that was formerly our street rose two feet.

Apparently, your house can get hit by a fallen tree, lightning, a tornado or even a meteor and you're covered by the "Act of God" clause. But the religion falls away from this corporation and a torrential rainfall becomes someone else's fault--maybe there's a State Farm clause called "Act of Satan"?

So thanks to Patrice's sister Cathy, we discovered the trick to tackling this situation. "Just start somewhere!" she stated and started lifting. 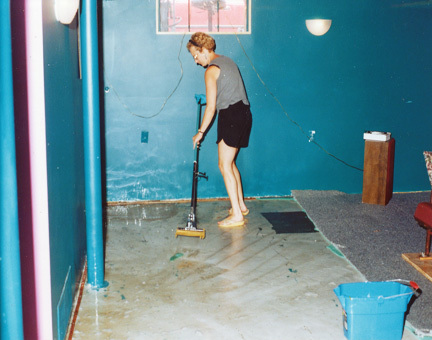 St. Cathy dives in to the yuck.

In a few hours, most of the basement was out drying in the sun before it made its way to the curb on garbage day. 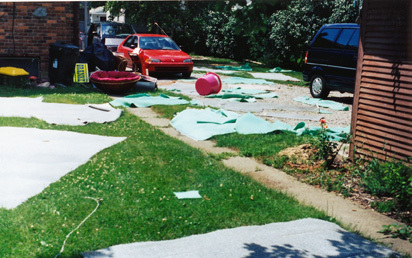 Nationwide Insurance did offer such a rider and we switched over and paid an additional $100 for the peace of mind. Imagine our surprise when the second "10-Year" rain of 1995 happened ten days later. Here is some nervous footage two days after the second storm when an "8-Year" rain happened. You'll notice the rain doesn't move past the sidewalk, which became the telegraph for me to head down the basement and pray that the outside didn't start seeping inside.

No way to live. I can't imagine how folks on the Mississippi sleep at night unless they live in a treehouse. Even when we sold the place three years later, we had to disclose to all comers that we have a potential health hazard just down the stairs, past the kitchen.

Nationwide did pay for the damage but told us that if we had the nerve to put precious items within two stories of our basement we were going to be dropped.

This past Monday, southeastern Michigan received a "292-Year" rain. Our current house has a sump-pump that was cranking away while the water rose, but 40% of the homes in Royal Oak weren't so fortunate:

James Balk had a remote-controlled drone and shot this eerie, apocalyptic look at one of the busiest intersections in the state: I-75 and 696:

Thursday evening, three days after the storm, my mom's assessor arrived at her condo. Like our old home, the basement had shown no sign of drain backup for the ten years she'd lived there. So the installation of new drywall and carpeting two years ago didn't seem too big of a risk. But they were up north, like we were, in 1995. The next morning my son drove over to check on the place and called to report the bad news--soaked carpeting and dirty water marks near the drain that smelled unlike rainwater.

The assessor confirmed this with a wrinkled nose before she even entered the condo on Thursday. Like my mom's provider (again State Farm) the assessor shook her head, said how sorry she was that there was no coverage and estimated a huge amount to tear out the carpeting, paneling, cut the drywall, move most of the contents to a rental dumpster and then disinfect, dehumidify and blow-dry everything for three days. The re-carpeting, drywalling and furnishing, if they chose to go that route again, wasn't their problem.

Days like these test not only your pocket-book, but your courage, your faith in friends, neighbors and insurance companies.